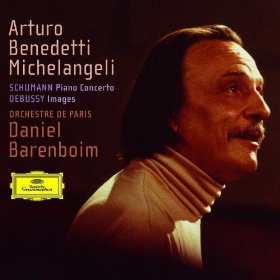 That pianist Arturo Benedetti Michelangeli was a perfectionist would be a notorious understatement. He spent his career polishing a miniscule repertoire and took scrupulous care in finding the right instruments, sound and interpretive conditions for his recordings. It should be no surprise, then, that he did not approve this recording of the Schumann concerto for release during his lifetime. (It was finally released through the approval of Michelangeli’s widow.) The piano lacks the crystalline tone for which he strove, and for all the talk in the liner notes about Michelangeli and conductor Daniel Barenboim finding “a new type of musical conversation” in this piece, they are not always in perfect sync; there are times when Michelangeli would seem more comfortable if the music went a little faster or slower. Still, this frission only adds more interest to the proceedings. Barenboim’s fluctuating tempos are reminiscent of his idol, conductor Wilhelm Furtwangler, and Michelangeli accommodates them gamely while engaging in a musical dialogue. Technically, the performance is flawless, as was generally the case with Michelangeli; the fact the pianist was 64 at the time is not betrayed by any loss in digital prowess or by any gaucheries in tonal shading. (This level of pianism is more inspiring when you remember the performance was taken from a single live concert, with no chance for retakes.) Overall, the performance is magisterial, with a spaciousness that allows the music to breathe. The sound is reasonably clear, though not ideally so, with a fair amount of hall presence.

Even more awesome are the four Debussy pieces from Images. Dating from 1982, two years before the Schumann, they were recorded as airchecks before a televised concert of Michelangeli playing the Ravel Piano Concerto in G; the pianist basically sat down and played each of these works in one take, without any thought to their considerable technical and interpretive difficulties. Compared to his 1971 recording of the complete Images, these performances are less remote, more relaxed and spontaneous, with no loss in tone color and a wealth of dynamic shadings. Reflets dans l’eau gains in urgency, Hommage a Rameau in balletic poise, Cloches a travers les fleurs in delicacy and Poissons d’or in effervescence. It is too bad that Michelangeli did not play the other two pieces from Images on this occasion; it would have been fascinating to hear what he would have done with Mouvement and Et la lune descend sur le temple qui fut. What is here is worth the price of the disc on its own. The sound, though still not ideally clear, is cleaner than in the Schumann and should give pianophiles no reason to hesitate from purchasing this disc.