Samuel BARBER (1910-1981)
Symphony No.1 in…
[hisss cackle cackle.. bbzzzzssttt] We interrupt this review with some musings on “modern music”…

I tend to assume (most likely to my detriment, since I have heard little) that all of Barber’s music is generally easy to approach, although he lived through the most hardcore period of the “postmodern” era. Briefly, some (not all) consider the “Modern” period to have ended within the first quarter of the 20th century, and everything thereafter up till perhaps the 1980s is considered “post-modern”. Within these two periods, you encounter the chaotic mass profusion of “-isms”; in music, you have everything from expressionism, intellectualism, dadaism to organicism, serialism, minimalism, blah blah blah to the ends of the earth and beyond.

Mostly, these terms are useful but FAR far from being definitive. Least definitive is the word “Modern(ism)”, which was first used in the 17th century to describe that time in contrast to the “Ancient” (eg. Classical times). The word “modern”, therefore, has been used to describe the “current” historical period for about, um, 300-odd years.

If you think about it, this means that centuries ago, Renaissance and Baroque music, for example, would have been called “modern”. In the late 20th century (you see I’m already beginning to write like a citizen of the 21st century), music called “modern” continues to elicit a look of disgust in many music-lovers. There is an element of truth to that look, but it is not by any means a static truth. Old dissonances become new consonances.

If we cease associating the word “modern” with a time, as some scholars do, then the modern era is indeed over. But unlike “Baroque”, “Renaissance” or “Romantic”, the word “modern” is rooted in time; and time is not static. In this sense, “modern” is almost as perplexing as “Medieval” (“Middle” – and where would the Middle of the Ages be in 2000 years time? AD2000?) – but worse, “modern” follows us through time… 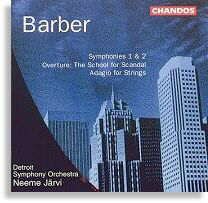 … What complicates the problem is that we associate the word with a style. Hence, some can’t decide if Barber (1910-1981) is “modern”; others can – no, because his music does not conform to the modern style; yes, because he was active in the modern time. Hmmm, what does the music sound like?

The album begins dramatically, majestically, with the searing nobility of the composer’s First Symphony. Cast in one movement by combining the traditional four, and based on three opening themes, it is a youthful work written in 1935-36. The workmanship and tone is admirably accomplished, but it would be suspicious to compare it, in symphonic terms, with say Sibelius’ Seventh Symphony, which is a far more substantial example of symphonic development in one “four-part” movement.

But this does not mean that Barber’s work is superficial. The musical argument is well-sustained – think of it in terms of a melodic classical symphony in a “modern” (oops) atmosphere. When played with such ample diligence and conviction by the Detroit Symphony, I find it more than bears repeated listening. Neeme Järvi is a very experienced Sibelian conductor, and it’s not surprising that the music finds him right at home here. The masterfully paced opening Allegro-vivace section aside, I am most impressed with his buildup in the Andante tranquillo section. The Detroit oboist presents his/her beautiful slow theme with great atmosphere, flowing gorgeously into dusky scenic music filled with a glorious string tune, singing majestically over a rolling field of brass and timpani. The crescendo – a Järvi-an specialty – is superb.

The first movement of the Second Symphony is also magnificently held together. Barber’s rather lucid musings are impressively drawn by the Detroit Symphony. Aided by Chandos’ detailed and clear recording, loud sections bloom magnificently while the pianissimi are very true (listen to the violins and bass drum roll at the end of the first movement). The “American” colour of the music and the orchestra here is even more vividly showcased becaused of this. The inclusion of an orchestral piano (and harp in No.1) is evocatively exploited in the performances and recording on this album. The oboe-led slow movement, reminiscent of the Andante tranquillo of the First Symphony, is likewise very atmospherically done. This is a serene piece of music, with a kind of sunset in some arid wilderness feeling, I think, combined with a bittersweet nostalgia. The sequence of material in the solo parts here are very beautiful indeed. 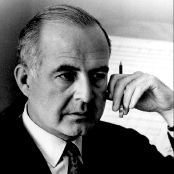 Certainly it is accessible music congruent to his general musical reputation, though (as Michael Fleming points out in his notes) “for him, as for his contemporaries, the symphony could not be self-defining.” Nevertheless, I do hear the voice and tone of the composer of the Adagio for Strings, which is also included in this album.

At the end of the day, we are given a choice regarding the word “modern” – do we continue to use it, but be more specific (clumsy as that might be: “Britten is 20th century modern music, Mozart is 18th century modern music”)? Or do we ditch it, and find something new? (How useful is the term “POST”-modern, anyway?) How would we call the music of the 21st century? I think we are about to find out…

In Singapore, Chandos discs can be found or ordered from HMV (The Heeren) or Borders (Wheelock Place).