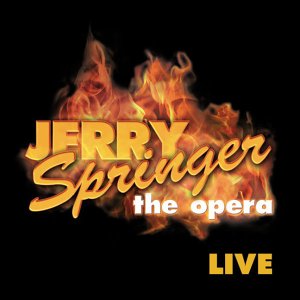 Book and lyrics by Stewart Lee and Richard Thomas

When a friend of mine lent me the cast recording of this new opera’, I was at first skeptical, thinking that it was merely a hack production using sensationalism to sell tickets. But after repeated listening, I admit that I was hooked! Thus, my obligation to you, dear readers, is to talk about this new masterpiece that’s the toast of London and soon on Broadway.

This new opera (and I use the term loosely here) that is creating major buzz on the West End is loosely based on the hit daytime talk show The Jerry Springer Show, whose topics range from I cheated on my wife with her transvestite brother to I was impregnated by a transvestite. Guests include members of the Ku Klux Klan to a fat lady covering herself with chocolate sauce and whipped cream, and then inviting suitors to eat off her. It’s riveting television!

This show is done in pretty much the same vein of its subject: the first act is a musical depiction of a typical episode of the TV show, complete with a Chick With A D*ck, a man with a diaper fetish, a pole-dancer aspirant, and of course lots of on-stage brawling, but with a twist at the end. The 2nd and 3rd acts crank the craziness factor up a notch with a Special Edition episode done in Hell with Satan, Jesus, the Virgin Mary and other holy people as guests. However, since this show had been made with Jerry Springers blessings, you need not expect any references about his tabloid woes years ago when he was caught sleeping with a pair of mother-daughter prostitutes, both of whom were guests on his show.

This work had its beginnings in the Edinburgh Festival (fringe) and the Londons National Theatre before it was transferred to its current home on West End. It is not strictly an opera in the traditional sense. But lets not get into technicalities here; it is after all a theatrical piece which is sung from start to finish, so it should qualify as an opera in the broader sense. But whatever you may want to call it, this show already has numerous awards to its credit, including the prestigious Olivier and Critics Circle Awards. Hence, its theatrical quality is firmly established.

The music is inspired by several styles ranging from gospel, rock and pop, jazz improve and soppy balladry; to numerous classical references with huge choruses, 4 part counterpoint singing, Classical Latin phrases like Dies iraes and Jerry eleison, and a character, Jerrys inner Valkerie (sort of like his guilty conscience). The scenes are linked with a succession of sung dialogue and short solo numbers, each one lasting merely a few minutes and often interrupted by the next character speaking.

The opera starts off with the Overtly-ture, a Verdi Requiem-style chorus that starts softly and then crescendos steadily, complete with rolling timpani and flittering flutes, to a rousing climax; all the while singing lines like I once dated a Lesbian Dwarf.  The rest of the show is done ingeniously with different styles varying between parody and serious moments, interweaving together to form a cohesive whole.

I was very impressed with the performance of the cast members. The important female performers are constantly switching from operatic cooing through rocky coloratura phrases, to heavy belting of the rock style. Take Lore Luxenbergs role of Baby Jane, a grown woman who dresses like a little girl: After the prayer-like This Is My Jerry Springer Moment, she switches to some semi-demented singing in Mama Give Me Smack On The a**hole! in mere seconds. The men too, have to go through many styles of music, including Bach like counterpoint of F**k You Talk, complete with basso instruments sawing away while the characters of Jesus and Satan tackle the runs on the F word.  David Bedella (right), who plays Satan, has already won a few Best Actor awards, including the prestigious Olivier Awards. I was hugely impressed with his talent.

But dont let all that trash-talking put you off; this show has one of the wittiest lines ever written for the stage. Sample dialogue like Shave off that beard and you might find a pimp! Or The Devils spiel: Fired and flamb, baked and sauted, steamed and stewed and barbecued Take my word for it, its highly amusing stuff!

My wish list this Christmas is that local corporations will stop bringing in those pointless pastiche musicals like Saturday Night Fever and Mamma Mia, and bring in a show where originality is actually a priority, and that our squeamish censors might get a sense of humour this time. Meanwhile, you can check out their official website at http://www.jerryspringertheopera.com/jerry_opera.html. You can also find the cast album on Amazon. Go for the music clips and see what all the hype is about!