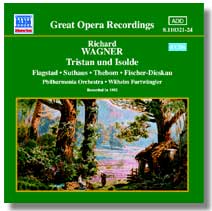 I wrote an introduction to this recording of Tristan und Isolde while it was on EMI here (cover picture on the left), back in our 72nd issue. Stately and measured, this recording of Tristan und Isolde has long since its recording in 1952 been regarded as the recording against which all other Tristans are measured. Kirsten Flagstad was beyond her prime and she isn’t the most dramatic of Isoldes – some find her rather matronly and certainly other singers, Frida Leider and Helen Traubel among them, added a dimension to the role that was beyond Flagstad at that time of her life, mainly in the first act, where her anger at Tristan and vulnerability is brought out to much better effect than by Flagstad.

But few have matched that sheer vocal effulgence and her security and familiarity with the role that she was so famous for, that one forgives any of these shortcomings. There are other recordings of Flagstad, including a famous one with Lauritz Melchior, where she is in fresher voice (she was 57 at the time of recording), but this was her last recorded version and is thus the best recorded. Her vocal shortcomings have over the years, I feel, been exaggerated.

Furtwängler’s conducting is a marvel from start to end, and even in the Prelude to Act I is impossibly moving – so natural as to defy any criticism. His conducting in the 1950s tended toward the monolithic, rather than the sheer visceral excitement of his famous wartime Beethoven symphony bootlegs and broadcasts, and this recording is no exception. What Furtwngler offers in this music is something far greater, that of a perfect (if slightly slow) pacing of the work, a unique understanding of how the different parts of the work and the instinctive control of his orchestra, here the Philharmonia Orchestra. The all-star orchestra made up of members of the leading London Orchestras at that time had only been formed by Walter Legge for a few years at the time of the recording but Furtwänglermakes them play the music like it was in their blood.

Ludwig Suthaus was not the only