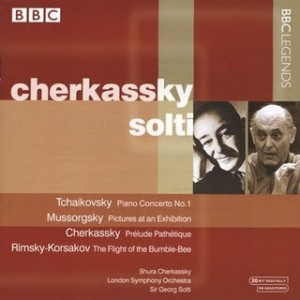 Shura Cherkassky (1909-95) was never boring, and this BBC Legends disc is an excellent souvenir of two memorable performances. His performance of the Tchaikovsky warhorse, where he teams up with Georg Solti and the London Symphony Orchestra, proves that there is imagination to be found in even the most trite of phrases. It is wonderfully alive and never heavy, but instead volatile in a debonair manner, if that’s at all possible. He gives life to the endless arpeggios and octaves taken so over-seriously by lesser artistes. In the Tchaikovsky, it’s easy to compare him with his nearly contemporary, Horowitz (1903–1989), but that’s like comparing two great magicians, each with their own tricks. By the time Cherkassky played this performance in January 1968, he was 57 and Horowitz had stopped playing the concerto for many years. The comparisons quickly cease once you’re in great stream of music that Cherkassky brings forth. A wonderfully rethought cadenza, masterful rubato, grand phrasing are just some of the highlights of his performance, and he punctuates like an orator, bringing new life to this unfamiliar music. 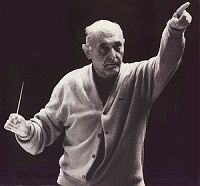 The London Symphony Orchestra and Solti are hand-in-hand with Cherkassky in this performance, with very alert accompaniment and some great wind playing from the English players can be heard. Solti in particular whips up a storm in the passage preceding the double octaves in the Finale (though this is somewhat underwhelmed by the lack of a timpani thwack at the end of said passage. The finale does lose a little steam at the end, which is a pity. There are no such reservations about the Ukrainian’s playing in the Mussorgsky Pictures at an Exhibition, another work which Horowitz and other Russian musicians made their own. This stems from another ‘live’ 1982 performance when Cherkassky was 71. There is an almost hypnotic quality about his playing in the pictures which is captivating, though as a whole this is a far less sombre experience than Richter’s many live versions, including the famous ‘Sofia’. The narrative quality of Cherkassky’s playing is again brought to the fore, with an atmospheric ‘Old Castle’ and ‘Bydlo, a whimsical and superbly characterized ‘Ballet of the Unhatched Chicks’, with ‘Samuel Goldenberg und “Schmuÿle’ bringing a full palette of colours to the table. His ‘Promenades’ range from pensiveness to grand, weighty, nearly orchestral crashing chords, punctuating the ‘pictures’ themselves marvellously. Wave after wave of colour are brought out in ‘Catacombes’, with a shimmering, superbly articulated island of serenity in the promenade preceding Baba Yagar, who is chillingly, wonderfully depicted. His handling of the ‘Great Gate of Kiev’ is majestic, yet lacking no finesse in the octaves, the bells insistent in their pealing in the triumphant, moving conclusion. The bravos that follow are richly deserved. A must-buy for the Mussorgsky. The two pieces that follow are excellent encores.