Whatever it is that surrounds the convoluted background of the origin of Bach’s seven solo harpsichord concerti, one thing remains clear – in this form, they are the very greatest of the genre. No one comes close. That the essence of the music retains its musical genius and power of expression is testimony to the notion that with Bach, every thing he wrote has the capacity to transcend its physical form. It is not without reason that someone once said that Bach’s music is the most transcribable of all. It does not matter so much what instruments are playing – Bach the master is always there.

If you have never listened to the music on these two volumes, and count yourself a Baroque fan, Bach fan and/or keyboard music fan – please do not wait any longer. My words here are not ever going to do any justice to the music – go out and buy these CDs now. Even those of you who may own Trevor Pinnock’s classic 1980s cycle on DG Archiv (currently in a 3-disc compilation covering all the single and multiple harpsichord concerti – 447 709-2)

No words will also do little justice to these performances. The soloist Robert Levin is better known for his highly acclaimed work in the Mozart concerti, with conductors John Eliot Gardiner (DG Archiv) and Christopher Hogwood (in an ongoing series on L’Oiseau Lyre, hijacked/assimilated by Decca). Here, in very recent recordings (May and September 1999) with the Bach Collegium Stuttgart and Helmuth Rilling, Levin again demonstrates his consummate skill and musical gifts.

The cosmic grandeur of BWV 1052 (let us all bow in homage to this King of Harpsichord Concerti: bow bow bow…) begins the survey, which spans the two volumes in BWV order. Hardly a moment is spared in tribute to this spectacular score. With immaculate phrasing and a beautiful instrument, the great D minor work surges with unstoppable drive under Levin’s propulsive solo.

Switching to the cheery pieces, works like the brilliant BWV 1055 are rendered with absolutely no lack of gaiety and life, befitting this happy embodiment of A major. Its sunny E major fellow, BWV1053, chortles with merriment under Levin’s team – just listen to the intellectual vitality, the effervescent exchanges between harpsichord and orchestra to experience but a small sample of what the two discs here hold. 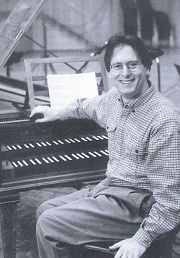 Surely Levin’s experience with Mozart has rubbed off something in these performances – there is a sensation of grace in his playing, a very satisfying flow which makes his crushed notes, upbeats, trills and rubato all very fluid and musical. If you would allow me a spot of abstract thought: Levin plays with more horizontal flow, more forward fluidity, whereas Pinnock focuses more on vertical architecture, which gives his readings more bounce. An example of these differences can be heard in their readings of the finale of BWV 1055. But in the final analysis, each has his measure of the other’s qualities, which makes comparison difficult, or perhaps unnecessary.

The slow movements are every bit as important as the fast, outer ones – again, Levin and his team show no shortage of feeling and artful elegance in the flowing arias of BWVs 1053, 1054 and 1056. The familiar slow movement of BWV 1058, which is a transcription of the Violin Concerto is particularly finely crafted – truly, one not merely senses the beauty of the music, but the amazingly concise and masterful structure of the score. The brooding majesty of BWV 1052’s slow movement demonstrates Bach in his out-of-this-world mode, floating somewhere between something proto-Romantic and proto-“Modern”.

Kevin’s slightly staccato, perhaps “hesitating”, way with the heavenly Largo of BWV 1056 robs some of his usual flow from the music. Though it is still a very beautiful rendition, I find Pinnock’s much more cantabile way with the music more naturally flowing, with superior rubato. Still, it is only because I am such a great admirer of this particular movement that I find myself nitpicking. Beyond this, I found myself constantly bobbing head and tapping toe to both these discs!

In this slow music, much of the nuances and phrasal solutions between both versions are wonderful in themselves because of the way different artists use disimilar ways to negotiate the musical passages. It is worthwhile to note that while Pinnock used the Breitkopf & Hrtel edition of 1869(!), Levin uses the New Bach Edition (NBA VII/4) for the Hänssler recording (at least for BWVs1052-54). So, those of you who already own the Archiv recording have something more to consider.

In BWV 1057, which is the alter ego of the familiar Brandenburg Concerto No.4, Levin produces a much more bubbly version, which makes Pinnock’s almost bland by comparison. I particularly enjoyed the contributions of the two recordists, whose phrasal solutions are very fun and natural. (Either that or we’re listening to the new editions). They negotiate their parts with uncommon elegance (for recordists) and appealing intonation – qualities which are in abundance throughout this cycle. 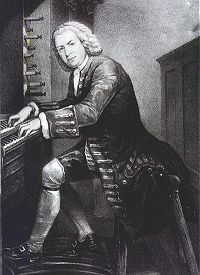 With such performances, you could hardly miss the violin version of BWV 1058 (a.k.a BWV 1041) – this is a very good reading, upbeat, full of life. The Hänssler notes are, as usual, enlightening and entertaining, with just the right tone for an introduction. Although Dr Bomba is still around, this time he is the editor to Michael Mrker’s fine essays. It is excruciatingly hard to describe this wonderful music, and I am thankful for any kind of enlightenment. For example, Mrker rightly points out that the first movement of BWV 1058, designated G minor, “is a very apt contradiction of the common assumption that major keys tend to be cheerful and minor keys sad, or at least more subdued. This minor setting exudes an irresistible spirit of confidence and determination.” Not an earthshaking revelation, but nevertheless an important point that highlights Bach’s originality and resourcefulness.

The extremely pleasing acoustics used by Hänssler are a great boon to the recordings, as is the top-class sound engineering. In comparision with the Pinnock recording, the Hänssler product is without doubt superior as far as sound is concerned. It has much greater definition than the older Archiv recording, and also a much warmer acoustic. Every note in Levin’s instrument is sparklingly, glitteringly and scintillatingly clear, chinkling with merry transparency; the differentiation of the voices in the solo parts are much more distinct here, and indeed, Levin’s harpsichord can produce different colours in different registers, which makes the layering of the music pleasingly varied. Even the orchestral accompaniment abounds in subtle detail, from soft pizzicato to breezy legato chords – all are reproduced with gorgeous delicacy.

But let it be known that twenty years have passed between these new recordings and Pinnock’s cycle! It is a wonder and a great credit to Archiv’s engineers that to this day, the latter’s classic recording remains a match to today’s standards. Personally, it’s quite unbelievable to think that so much time has passed between these masterly performances, but all the more believable then is the fact that in the hands of great musicians, we come closest to hearing Bach in his most ideal essence. This undeniably affirms Levin’s recordings to be the rightful heir to Pinnock’s classic recordings, and I am proud to recommend and place them beside each other.

CHIA HAN-LEON has finally done his taxes. (No, not for the Inkpot, but for his “proper” job)