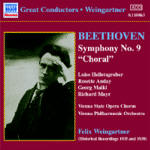 Here is Weingartners Beethoven in a nutshell: form without function, elegance without energy, clarity without cohesion. It is not so much an interpretation as it is a shell of one: hollow, half-formed, bereft of internal lifeone senses it might have been a great one were it not for the utter absence of any kind of vitalizing force at the actual moment of performance. It is, quite simply, flaccid, with both conductor and orchestra merely going through the motions of a performance. Such a glassy approach might have sounded more acceptable in less galvanic works, works in which lucid formal exposition is of paramount concernthe middle Haydn symphonies, or Stravinskys Symphony in Three Movements. But Beethovens Ninth Symphony is an inherently subjective work and bears the brunt of dispassionate objectivity badly. There may be much to admire in the logic with which Weingartner invests the development section of the first movement, or the clarity of voicing in the thirdbut there are other conductors who have done this far better than he, and in any case does it matter when the transcendent aspects of the work have been so perfunctorily dismissed?

Under Weingartners direction the finale, in which T.S. Eliot saw Beethoven reaching for the divine, has all the spiritual aspirations of an accountants balance sheet. I have never heard a drier Freude schoner gotterfunken or a more laconic Seid umschlungen. As for the presto choral peroration, it brings to mind nothing so much as a cantering cadre of cane-wielding geriatrics. One seeks in vain for vitalizing values such as rhythmic resilience or elegance of phrasein Weingartners world of ideal Beethoven interpretation they dont exist, for they are the mere encrustations of interpretative personality and should be avoided at all costs.

And yet the main problem with this performance is not that Weingartners creed of self-effacement has led him to systematically eradicate all traces of personality from his performances, disastrous an aesthetic stance as that might be. It is simply that he doesn’t seem to care about the music or what the music has to say. Dispassionate objectivity must be sustained by executive and interpretative consistency, of which Weingartner displays woefully little. Textural clarity, one of the virtues for which he is lionized, comes and goes: if it happens, he likes it; if not, that’s fine as well. His agon with the Mengelbergian Subjectivists has been well-documented, but he seems just as ready as a Mengelberg to alter the score as he wishes: melodic lines are irrationally doubled, especially amongst the trumpets; metronome marks are followed when they are convenient and ignored when they are not. One need not obey metronome marks to the letter if one retains the basic temporal proportions of the score, but anyone who trots through the final presto with such maddening half-heartedness is clearly uninterested in proportions of any kind.

The sumptuous tonal qualities of the pre-war Vienna Philharmonic would have done marvelously in Cosi fan Tutte, but matter not a jot in the Ninth symphony, the least coloristically-minded of all Beethovens orchestral works. It does not have the tonal heft to do this work justice, and its case is not helped by the virtual absence of bass from the recordingsome of the weightier sections sound positively anorexic. At least the orchestra can meet the technical demands of its partsmore than can be said for the Vienna State Opera Chorus, which sounds moldy in the lyrical sections and hoarse and feathery in the more fervent ones. The tenors entrance after the B flat major tenor solo in the finale has all the consistency of granulated cheese. The dry acoustic of the recording venue and the severely constricted recording itself make the chorus sound even more breathless than it is. None of the soloists are outstanding; the soprano Luise Helletsgruber and the tenor Georg Maikl founder on many of their high notes.

Perhaps I have been blinded to the virtues of this recording by the many greater ones which have followed it. There are many who think more highly of it than I do: Ian Juliers liner notes, for example, are almost embarrassingly fulsome in their praise. Yet I cannot confess to admiring it as anything more than a historical document. It is simply a mediocre performance, pedantic in conception and rather lazy in execution. It may stand well against the murderous Toscanini/NBC Symphony recording, but cannot bear comparison with enlightened contemporary readings such as Erich Kleibers Concertgebouw recording. In the generation after Weingartners the school of neue sachlichkeit found a far more sympathetic interpreter of this work in Herbert von Karajan, whose four commercial recordings have practically monopolized the Beethoven Ninth market since the 1960s. Apart from being subtler and more fascinating in conception than Weingartners, they are better prepared and far more ravishing on the ear, with the Berlin Philharmonic at peak form recorded in superior stereo sound. Another incarnation of the new objectivity, of a far more passionate nature, is Klemperers riveting 1958 live performance with the Philharmonia: here the plainness of the objective approach isn’t allowed to devolve into pedantry but made to attain a tone of sublime stoicism. But I want my Beethoven Ninths to be intensely personal in tone, and for that I will gladly return to Furtwangler, whose numerous Ninths banish all others by their combination of philosophical depth, totality of conception, and sheer cosmic intensity.