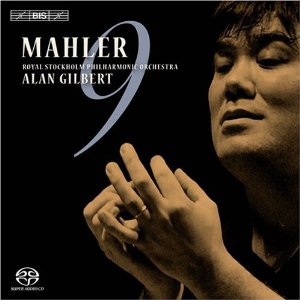 Mahler Symphony No. 9 in D major

New recordings of Mahler’s 9th are hardly the events they used to be even just ten years ago, but I listened to this disc with a great deal of anticipation, having heard some good things about it, including it getting the BBC Radio 3 Disc of the Week when it was first released. In addition, Alan Gilbert had just been announced as the new chief conductor of the New York Philharmonic, and my curiousity was duly piqued. Would this, perhaps be a new favourite recording?

Despite the stellar clarity of this multi-miked recording from BIS, the obvious virtuosity of the orchestra (there are no weak links here, and everyone plays their parts with great ease, as it comes across anyway), coupled with the obvious rehearsal (or perhaps, over-rehearsal), this performance isn’t top drawer Mahler. In fact, it is one of the most sterile performances I have heard of this work.

Efficient and without nuance, Alan Gilbert leads a tight ship with his former orchestra, the Royal Stockholm Philharmonic, in a finely graded performance, firmly controlled with a Szell-like precision. His priorities seem to lie more in bringing out the contrapuntal elements of the symphony (which he however, does superbly) than exploring its emotional core, which he neglects, to its detriment.

I can’t remember who it was who compared Mahler’s Ninth with Tchaikovsky’s Pathetique Symphony, saying that its intensity made the Russian composition appear like a walk in the park. Here, Gilbert succeeds in making the symphony sound exactly that walk. Every section, every instrument, sounds its notes perfectly in place, and beautifully every time (I can’t remember the last time I heard such consistently lovely string tone in this symphony), but the climaxes, the titanic struggles that happen in every movement of this symphony have as much tension invested in them as a tea party.

In the first movement Andante comodo, Mahler rails against his fate, fighting against it and seizing it by the throat. In Gilbert’s performance, you don’t get what the fuss was all about. Often Mahler uses stops on instruments, for example, the horns, or writes music in an awkward register for a wind instrument, to achieve a certain effect. In this recording many of these effects go for naught. Listen to the passage after the second collapse in the first movement, where the trombones hardly make their mark, as they do in the great recordings by the usual suspects – Horenstein, Klemperer and Mitropoulos.

In Mahler’s Ninth, there is that pervasive sense that the music is losing its bearings, a free-spinning into chaos, a struggle between the tonal and the atonal, that makes the music so exciting to listen to and so compelling. The second movement Ländler similarly collapses into a loose-limbed foot-stamping waltz, distorting the well-known dance forms into something grotesque and vulgar, which Gilbert’s manicured version summarily eschews, together with Mahler’s many written portamentos. There’s none of that foot-stamping here, only polite figurations – hardly ‘sehr derb’ (very earthy).

The third movement Rondo-Burleske is similarly low on irony or sarcasm (Mahler dedicated this to ‘my brothers in Apollo’ – referring to his critics), with hardly any of that manic violence one gets from someone like Klemperer, in his studio recording, or Horenstein in his live London Symphony Orchestra performance.

The final great Adagio goes some way to remedying the clinical lack of involvement that comes before it, and here again some ravishing playing is to be heard, but despite a more satisfying emotional pitch, for me it’s too little, too late. Perhaps due to the nature of the recording, the chamber music qualities of the movement, and its intimacy are emphasized over its scale. Strangely, he decides here to observe the numerous written portamenti, but these don’t come across very effectively and seem executed from without rather than within. When I reached the coda, I wondered how this recording would have turned out if the rest of the movements had been similarly played. As it is, this is one for the cull stack, and I will cling on dearly to my Horenstein, Klemperer and Mitropoulos performances for the Mahler I recognize and love.