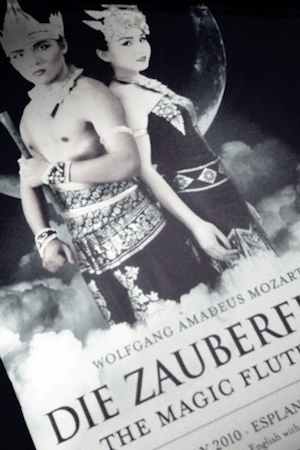 The Magic Flute is one of Mozart’s best-loved operas, although story-wise it is confusing, to say the least. This new, enjoyable production by Justin Way for the Singapore Lyric Opera, interestingly enough transplanted from Egypt to presumably ancient animistic Bali, fell short on new insights but allowed for interesting costumes all around, especially in the henchmen of both Sarastro and The Queen of the Night. If the publicity poster didn’t give the game away, their black and white checkered sashes surely did.

We’ve grown accustomed to semi-lavish sets that wow the audience when they see it (think the recent Traviata and Turandot). In some ways, this was a deviation from that general direction, with comparatively simple set design. A two to three metre wide disc set at an angle and placed in the middle of the stage served as a semi raised platform on which a character could gain elevation, while the two halves of another higher platform about two metres high, made to look like Bali’s rice terraces at one point, came in from either wing to join up so that other characters could make themselves seen. A flight of steps about waist-high in the background served as the entrance to the Temple from which various other characters emerged.

While the costumes and to an extent the sets (honestly the only other things I found immediately identifiable were the rice terrace and the stone pedestals on the entrance to the temple) appeared Balinese, I find that this was about the only point where that was implemented. Usually when a director decides to transpose an opera to another era or location, one hopes to find insights into the original opera; here I had difficulty seeing how Balinese Hindu god worship had to do with the plot, apart from a few tenuous echoes from the Ramayana.

Somewhat unrelated, but worth talking about – right after the overture, I hoped to see a serpent or a dragon as it were emerge, perhaps animated by a troupe on sticks. Instead what appeared like a large two dimensional lion’s head descended. As the three ladies put it to rest, the eyes just closed. Here was a chance to wow the audience, and I think it was a bit of a wasted opportunity, since a dragon is clearly mentioned in any synopsis. It would have been a good way to attract repeat visits to the opera.

For the seasoned visitor to the opera not too concerned about sets and visual effects, there were many things worth listening out for. In fact the best of the evening was presented before the appearance of the afore-mentioned serpent/dragon – the orchestra’s playing, under the baton of Alice Farnham, was some of the best I have ever heard in an SLO performance. Her interpretation, it must be said, was firmly middle of the road, with no surprises to this well-known music, but a degree of ensemble was achieved, with a rich orchestral sound especially in the nicely articulated winds, that I’ve not heard before. Throughout, she gave firm support without being entirely inflexible while doing so.

Still, it’s an opera and the singing is the thing. In this aspect things were more uneven. German operas are not frequently put up by the Singapore Lyric Opera, with the result that when they are produced, the German-speaking population in Singapore makes itself felt, including a particularly disruptive bunch in the row behind me. In this production, much like in their productions of Carmen, the SLO elected to use English in the spoken dialogue rather than German – a wise choice, it would seem, since the sung German was often spotty.

The most accurate German in the leads came from Song Kee Chang, the Korean Papageno, Lemuel dela Cruz as Monostatos, William Lim as the orator. The rest ranged from good to terrible, with Tamino (Kota Murakami) responsible for some of the worst pronounced German that I’ve heard for a while. 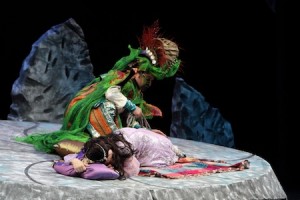 Vocally and dramatically, I think Song Kee Chang’s Papageno stole the show (he also received the loudest plaudits this opening night), with well sung and vocally-acted arias, from ‘Der Vogelfaenger bin ich ja” to  the later “Ein Madchen oder Weibchen”, with no vocal acting or overenunciation and a straightforward way of singing that was particularly winning.

I mentioned Tamino’s pronunciation earlier, and I should mention his voice as well. Basically a lyric tenor, his voice was light but not entirely without power, but in the higher tessitura (especially in “Dies bildnis”) there was strain where one expected a Mozartian legato.

Pamina, played by the ever-reliable Nancy Yuen, featured more Italianate singing than is usually heard in sopranos essaying the role; dramatically she seemed a little freer than before, her lyric voice with floating high notes put to good use, with a real Mozartian legato in “Ach, ich fuhl’s”. 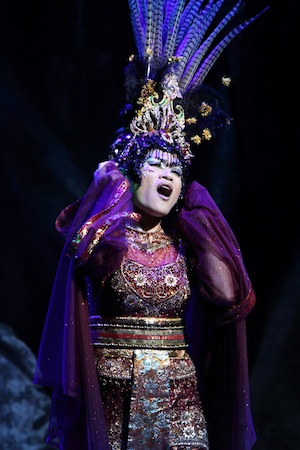 Her mother, the Queen of the Night (right), played by Tai Hsiao Chun, famed for the role in Taiwan, featured machine-gun accurate singing with a touch of the dramatic in her two colouratura arias, garnering enthusiastic applause. A word about her headpiece – although conceived with the best of intentions, it succeeded in distracting rather than contributing to her imperious image, appearing for the world as if a pineapple had grown out of her head. Still, the two arias were a delight, all the more impressive coming from so slight a figure, and delivered at so quick a speed.

Her counterpart, Sarastro, was played by Singaporean Martin Ng Hon Wai, who won International Singer of the Year Award in 2002, had a more baritonish tone than the dark bass for which the role was written. With a bit of a beat and strain in his low notes, they lacked resonance and clarity expected in this difficult role. Also on stage was William Lim, whose velvety rich bass put Martin Ng’s in the shade. Notably, William played Sarastro previously.

Usually the minor roles get little mention; in this case that would be wrong, since vocally as well as dramatically, they equalled or surpassed the leads. The three Genii, Laura Rogers, Ong Jean Wei, Azura Farid, deserve special mention, for besides singing and memorizing their lines they had to ring around the leads on stage in some parts and master some fancy footwork. They also sounded exquisite. The chorus, featuring a largely Filipino male choir and many local and expat females, was another bright spot in the whole production, sounding magnificently clear when they emerged, and with unambiguous German (how in the world did they get so many sumo wrestler types to appear bare chested on stage? Warrants a photo or two at least, eh, SLO?) Ee-Ping, Cherylene Liew and Anna Koor were the exemplary 1st, 2nd and 3rd Ladies, with a comic timing and ensemble in the first scene that was only outdone by yet another surtitling issue (such imperious English too, in the dialogue!)

A word about the surtitling. Syncing the surtitles displayed with what the characters are singing is a problem that has plagued performances by the Lyric Opera for the last few years – sometimes the surtitles don’t change until the characters have sung three or four lines down, and then the audience has to practise speed-reading when they are flashed by so as to get to the lyric currently being sung. It only happened a couple of times, but that’s something that can definitely be worked on. And if we’re going to be on the subject of surtitling, can we have more straightforward English rather than a version that may rhyme but is more difficult to understand? Some of the translated lyrics were positively Yoda-ish in their structure!

As a whole, I think the production was a success, and memorable on many levels, given the budget constraints that still bug our local opera company as a whole. It gave much to think about, and it was a pleasure to hear Mozart’s final operatic masterpiece once again, as well as a reminder that the hardest works to do well are those which are the best-known. In the orchestra, we finally have an opera-worthy vehicle. Bring on, then, Bizet’s Carmen, to be performed in January next year! 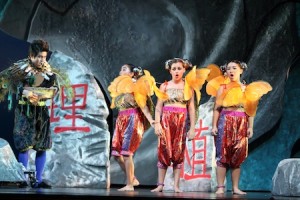 The three genii, sung by three girls, as it usually is nowadays. 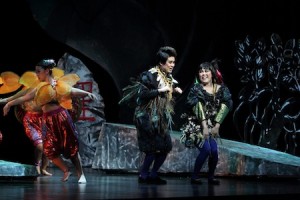 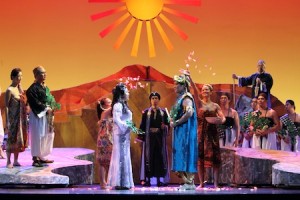 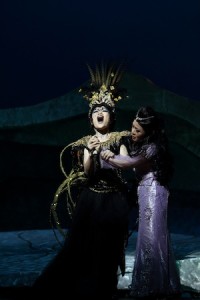 unfortunately, it was the English dialogue that murdered it. I cringed each time the singing stopped and the conversation started. One of the ladies even choked and forgot her lines, one of the Genni almost tripped on the raised

Actually, the genii that you mentioned, apparently slipped on a piece of Monostatos’ green cloak, and she twisted her ankle. Amazing how she managed to pull though and recover so fast! Got up on the beat too 🙂

I witnessed the last performance on Tuesday and the theatre was only a third full . Here’s what I think of the performance…Excellent was the overture, the 2 arias by the Queen of the Night. Nancy as usual was in top form. The entertaining scenes were Papageno and Monostatos, Papageno and Papagena. Overall, I enjoyed this more than Don Giovanni, unfortunately, it was the English dialogue that murdered it. I cringed each time the singing stopped and the conversation started. One of the ladies even choked and forgot her lines, one of the Genni almost tripped on the raised centrepiece…how unprofessional …almost like a school play……..glad I couldn’t get the $130 seats in the first place. All in all, this is a big step back from La Boheme, which was nearly full on the last performance. Let’s hope we will not have this terrible English dialogue in Carmen.

Hi Hsu Lin, Thanks for comments. I agree the English dialogue was distracting, but having them speak German could have been disastrous. A music-only Magic Flute wouldn’t have been quite right either. I guess box-office wise Magic Flute could have done better, but perhaps we shouldn’t over-play this point, otherwise we’ll never get to watch anything other than Verdi and Puccini! Which ‘Don Giovanni’ are you referring to?