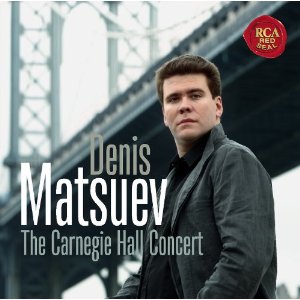 Complaints first. I know it costs extra to have more than 20 tracks on a CD, and there are already 20 tracks on this disc, but does that mean the 30-minute Liszt B minor sonata has to be shoehorned onto one track? Surely, Sony/BMG could have flipped the bill to spread the sonata along at least three tracks, as is common practice nowadays. Then again, given the current state of the classical music industry, maybe we are lucky to have this disc at all.

Quibbles aside, this is a glorious recital. Any pianist who starts a recital with a quiet work such as Kinderszenen must have a supreme trust in his ability to convey poetry and whimsy to an audience and in his listeners’ openness in receiving the same. From the opening notes, Denis Matsuev proves his trust is not misplaced. He gives us a Kinderszenen of unaffected, wide-eyed wonder, “reflections created by an adult for adults,” as the liner notes remind us, but filled with “nostalgia … and gentle melancholy.” In Matsuev’s hands, each of the 13 pieces that make up this cycle is not just dream-like, but a genuinely affecting, colorful tone poem, imbued with its own narrative arc and emotional trajectory. It joins Martha Argerich and Vladimir Horowitz as one of the finest traversals to date.

The Liszt sonata which follows Kinderszenen is pianistic blood-and-thunder of the first order. A staple of recitals and competition programs, it is a piece which we will probably hear a lot with the Liszt bicentenary coming in 2011. If so, then other pianists will have to really work to match Matsuev’s effort here. Matsuev gives us operatic Liszt, one that thunders with a full panoply of orchestral timbres yet also constantly sings. Matsuev’s speeds are propulsive in the sonata’s louder moments, but he also takes time to savor and caress the melodies in the quieter moments. Also, while he maintains flexible tempos, his changes in speed never feel contrived or inorganic to the music; everything pulses and breathes normally. All these qualities hold true for the Prokofiev Seventh Sonata. While that piece operates with a different set of pianistic weights and measures, it shares a lyricism in its less aggressive passages with the Liszt, in which Matsuev indulges to a refreshing degree. While he may not partake in the outer movements in the sheer diablerie in which Horowitz and Sviatoslav Richter indulged, he still gives full measure to the looming disquiet of the opening movement and the grinding motor rhythms of the finale. Three encores follow—a charming Liadov Musical Snuff-Box, a dramatic Scriabin D sharp minor etude (a favorite work of Horowitz’s, and given if not as seductive, then at least as gripping a reading as Volodya did), and a Grieg Hall of the Mountain King, in Grigory Ginzburg’s transcription, that literally brings the house down.

It is easy in these days of hype for this or that new pianist to downplay the importance of a Carnegie Hall recital. Once in a while, though, a pianist comes along who proves that he has something special to say as an artist. Denis Matsuev is one such person. As easy as it would be to ignore him in the flood of young artists now gracing recital stages and competitions, to do so would be a mistake. This recital showcases a pianist of interpretive maturity and technical skill, one who has thought deeply about the pieces he plays and has something important to say. Here’s to hoping he has the chance to say much more.