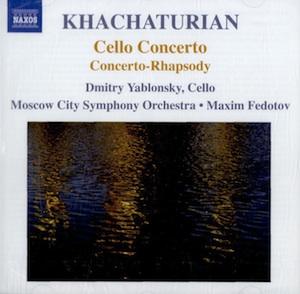 Cello Concerto in E minor
Concerto-Rhapsody for cello and orchestra

Aram Khachaturian’s Cello Concerto has proved the least popular of his three full-length concertos. Written in 1946, it does not have the big tunes of his violin and piano concertos. Worse, the brooding quality of several passages (including the appearance of the Dies Irae in the opening movement) did not endear the work to Soviet authorities, who would soon come crashing down on Khachaturian and several other composers with the Zhdanov decree, accusing them of “formalism” in their musical works. The concerto is nonetheless an attractive and inventive score, pulsing with dance rhythms throughout and, while the central andante is more introspective and melancholy than its brothers in the other two concertos, it shares with them Khachaturian’s trademark exoticism in its closing pages. Dmitry Yablonsky, who has appeared with Naxos several times as a conductor, shows himself a fine cellist and a fully committed soloist, possessing a big tone and a solid technique. With performances such as this one, it is our loss that the concerto is not heard more often. Maxim Fedotov and the Moscow City Symphony Orchestra are equally fine.

While the concerto-rhapsody is a more dynamic piece than its brother for violin and orchestra, it shares that piece’s main flaw—namely that it ambles forever without a respectable tune. Since the lack of first-rate melodic material is a trait shared by both pieces on this disc, the difference between them is not as severe as that of the violin concerto and the violin concerto-rhapsody. If you like Khachaturian’s music in general, you may enjoy the cello concerto and also find the cello concerto-rhapsody agreeable. But be forewarned: Although much happens in the concerto-rhapsody, and as pleasant as it is to hear, it does not add up to very much and is forgotten almost as soon as the music stops. That said, there are worse ways to spend the time, especially with as passionately driven a performance as this piece receives under Yablonsky and Fedotov.