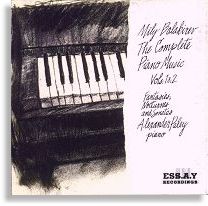 Balakirev, together with Cui, Borodin, Mussorgsky and Rimsky-Korsakov were called “The Mighty Handful” or simply “The Five”; they steered Russian composition away from the European school and uncloaked native Russian melodies to the international musical world. Though Balakirev’s style is highly reminiscent of the European Romantics (notably Liszt), he nevertheless utilises distinctly Russian elements. Sadly, for all his pioneering work, his disagreeable personality has left his works largely neglected, perhaps with the exception of Islamey, hardly his most representative work but largely valued for its opportunity of showmanship.

Alexander Paley was born in Moldova and graduated from the Moscow Conservatory, emigrating to the States in 1988. Given his training in the Russian School, Paley has indeed acquired a solidly-grounded technique, obviating many difficulties in Balakirev’s notoriously difficult works. 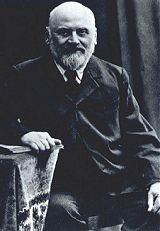 The first volume of Paley’s Balakirev (right) cycle opens with two of Balakirev’s largest-scale, and probably most well-known, piano works: Islamey and the Fantasia on Themes from Glinka’s “A Life for the Tsar” (which Glinka and audiences alike took to immensely). Large-scale, not only in concept and architecture, but also in technique. After all, the great Alfred Cortot once wrote that “the two most difficult pieces of piano music were Balakirev’s Islamey and Ravel’s Gaspard de la Nuit“. Given that Ravel wrote Gaspard de la Nuit partly to rival the extreme difficulty of the other piece, it then follows that Islamey was the original Mount Everest for pianists. Logical?

Harlow Robinson wrote of Balakirev’s extremely eccentric nature; the composer has also been variously described as being “demanding, fierce, and deeply spiritual” and “despotic and tyrannical”. Though Paley’s playing is adequately fiery, I could not catch the idiosyncracy or spontaneity of the two Fantasies, which I had somehow expected from a composer who possessed one of the most awesome techniques among the Russian composer-pianists.

Paley finds a more sympathetic voice in Balakirev’s smaller pieces. The short but charming Fantasiestck is quite typically Lisztian in its solitude, but with a Russian flavour that foresaw Rachmaninov’s darker chromaticism. The three Nocturnes are even more inward-looking, their depth of emotion, espressivity and lyricism ranking them with the Chopin’s own nocturnes. The Capriccio is rather sprawling with a Romantic middle section, but the recapitulation returns with greater force and ends with rich Russian weightiness.

The second disc contains the major sonata material that Balakirev wrote. Paced, suspenseful chords open the Sonata No.1, written when the composer was twenty, but, according to Paley (below left), was not completed. The first movement, including its chromatic octaves and virtuosic style, gives ample evidence of Liszt’s influence on the young Balakirev. Its grand excesses were cropped by the limited bass sonority of the piano (take, for example, the fff Grandioso section). Nonetheless, Paley gives a natural, rhythmic Mazurka and a reflective, thoughtful Andante third movement. 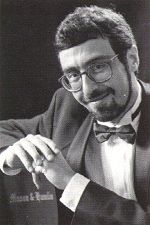 The short Sonatina (only 5’36”), subtitled “Esquisses” (Sketch), has traces of Lisztian writing too. It opens with a Schumannesque miniature, passing through an uncharacteristically brooding Mazurka, continuing immediately into the fleeting Coda. Paley demonstrates again his affinity for Balakirev’s shorter charming works.

The Sonata in B-flat minor is Balakirev’s crowning achievement in this genre. Its starts with a polyphonic introduction, starting with a single voice a la Bach’s fugues, and even throughout the body of the first movement Balakirev continues with the polyphonic writing, styled in a more Romantic way. Paley attributes this unique feature to the composer capturing the quality of Russian polyphonic folk choral music. The second movement is again a Mazurka, but this time expanded with a greater versatility of form. The Intermezzo floats with a dreamy nocturne-like lyricism, its reverie only broken by the lively Finale, which ends surprisingly with a soft ripple. With this Sonata, Balakirev has finally broken from the matured German school and found the fresh individuality of his own voice, achieving a concise maturity and focus of thought absent from his earlier Sonata no.1.

Though I feel that finer nuances and a more opinionated reading would add greater colour, vibrance and focus to an already polished and secure performance, Paley’s piano reverberates rather thinly and the recorded sound is crisp but not spacious enough. However, this cycle of Balakirev’s complete pieces for piano is an excellent introduction to Balakirev’s talent and art, and is a good recommendation for anyone who wishes to explore Nationalist Russian music before Rachmaninov and Scriabin.

In Singapore, this CD is available at or can be ordered from Borders (Wheelock Place), Tower (Pacific Plaza & Suntec City) or HMV (The Heeren).