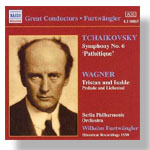 For those of you who jaded by Tchaikovsky’s Pathétique, this is a recording to restore your faith in it. It’s an interesting exercise speculating just why the great German conductor Wilhelm Furtwängler actually found sympathy in Tchaikovsky’s music, and no-one will ever know, but this recording demonstrates an exceptional willingness to take Tchaikovsky on his own terms.

Many conductors take the first movement as a series of episodes and emphasize each as it comes, to the detriment of the music. Not Furtwängler. The symphonic development of the music is always firmly in his grasp. For some his treatment of the lyrical second theme will prove too much, too moulded, but it sounds beautiful and never maudlin, and always sincere. 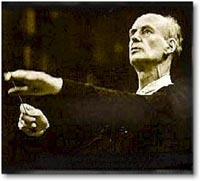 Few others, too, have achieved the feeling of an organic growth in this symphony the way he manages to. True, the tension in the start of the movement is somewhat lacking in some desks of the orchestra, but like a live performance, the orchestral players slowly respond to his music-making and by the time we reach the dramatic trumpet fanfares that herald the fugal section the tension is palpable. For Furtwängler  the emphasis of the symphony is firmly in the last movement, for he underplays the drama of the first movement somewhat, though in no way does it become light fare. I wonder what conception Furtwänglerhad of the music; to me it sounds as if he thought of it as somewhat of a fantasy than as an outright drama that others respond to it as.

The second movement, with its five-four  time waltz is characterized by agogic tempo shifits. Furtwänglermust have thought long and hard about this – the music blooms naturally, sounding totally natural. His transitions are also notable for the beauty – they sound natural always and never forced. There is nothing sinister about this reading; Furtwänglerobviously thought of it as an interlude, if a rather serious one, still he keeps a sharp eye on the long line and it lacks nothing in intensity.

The third movement is a rather straightforward, standard performance of the work – quite fleet and full of the high-jinks that are associated with this Scherzo. It isn’t until the bridging passage before the coda that the performance becomes suddenly malevolent and trenchant. The slamming on the brakes in  the last passage in the coda before he negotiates the accelerando to the end, much like in his 1953 Vienna recording of the Beethoven Seventh finale, albeit in a shorter time span, turns the music suddenly defiant and even hysterical. It is simultaneously thrilling and upsetting.

Performances of the Pathétique live or die on the their last movements. Furtwängler, together with Mengelberg, deliver the most intellectual performances I have ever heard. Superficially, Furtwänglerperformance sounds instinctive and intuitive, but closer listening reveals his response to the structure, again, of the music, while Mengelberg remains cerebral to the end. Both are affecting in their different ways.

The climax of the movement is notable for its volcanic power and anger. In this performance, Furtwänglerclearly rejects the notion that the Pathétique is at all self-pitying; a resignation associated with a composer battling with a society that did not understand him is instead the picture that we get from listening to this performance. The coda is nevertheless chilling and the strings bring mournfulness to a different existential plane.

Orchestral playing from the Berliners is at its best, though comparing them to the best orchestras nowadays invariably show them at a disadvantage. The current transfer is the best I have heard, other than a difficult-to-get EMI Japan transfer which I heard once. An A/B comparison with the EMI on the Tchaikovsky Historical set shows improvements, though hardly startling. Still at the super-budget price that Naxos gives, why not listen to the best?

Listening to the Prelude und Liebestod from Tristan right after is a heavy experience; certainly it isn’t as luminous an experience as the later performance (in the full Tristan, now on Naxos),  still it is in very good sound for the time and perfectly paced and played, lyrical yet dramatic. Having the Liebestod performed right after the Prelude is such nonsense that it should be banned, but if you want to listen to it, there’s no better man for it than Furtwängler(though performances by Toscanini run a close competition. The Liebestod here is in turns tender, then passionate and in the end achingly nostalgic.

An urgently recommended performance, for all interested in Tchaikovsky performance practices beyond the Russian school,  and Furtwängler.