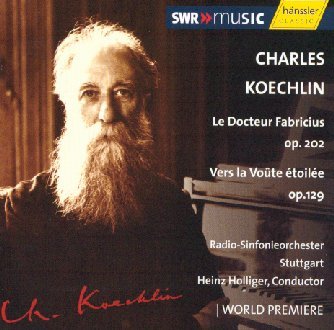 by Derek Lim
Charles Koechlin (1867-1950) could easily stand alongside Eric Satie and Charles Valantin Alkan in the League of Extraordinarily Gifted and Eccentric Gentlemen that France seemed to produce like vintage wine in the 19th century (but not without foreign competition from the likes of American Charles Ives and Russian Alexander Scriabin, among others).  Koechlin was born in-between Claude Debussy (1862-1918) and Maurice Ravel (1875-1937), but as it turned out, he outlived them by decades, living to see the new developing voice of composers in France.

Perhaps in part because he lived so long, Koechlin was, like Igor Stravinsky, a stylistic chameleon throughout his compositional career, as witness his best-known work, The Jungle Book.  A series of tone poems that started out as a trio of songs for orchestra and stretched out in gestation for decades, The Jungle Book, begins in a quietly impressionistic mode, eventually evolving into a spiky monothematicism as he reached the final segment of the series, The Bander-Log.

Koechlin was also as tremendously productive as he was correspondingly unknown, the latter thanks to and not really the fault of his compatriots Debussy and Ravel.  Debussy and Ravel were so representative of the French school of music, achieving so much fame and influence, that they unwittingly made their countrymens efforts seem trivial.  It surprises me still that, in light of fame so eluding them, so many other composers continue to persevere with their vocation, writing music in the sheer need to write it.This new disc, recorded in 2003, features two works by Koechlin arising from different periods of his career, and establishes Koechlin as a fascinating composer with a unique voice, taking in the various influences of his time but tracking his own course nevertheless.Vers la Vote toile (Toward the Starry Vault) is a “nocturne for orchestra” whose tonality and harmony mark it unmistakably as a work of the French school.  Influences of Ravel and (less so) Debussy are present but the writing is definitely coloured by the German late Romantics, Wagner, for sure.  Composed between 1923 and 1933 it was dedicated to the memory of Camille Flammarion, a French astronomer who wrote the book Astronomie populaire, a volume responsible for Koechlin’s nascent love for the discipline. Unbelievably, Vers la Vote toile was premiered only in 1989 at the Berlin Festival. Koechlin was obviously very comfortable with the use of the orchestra and his juxtaposition of instruments is a pleasure to behold – always natural and yet full of little delights. His constant shifts in tonality are facile and equally comfortable to hear. In temperament, Vers la Vote toile feels much less aloof and objective than what you might hear from Debussy — more full-blooded and even heart-on-sleeve, emotional and expressive. A gentle melancholy runs through the work Koechlin’s yearning for “eternity, and beyond”, perhaps.Le Docteur Fabricius seems a more substantial work, lasting a full 51 minutes.  Like Also Sprach Zarathustra it is based on a philosophical text (in this case a book by Charles Dollfus, Charles Koechlin’s mother’s younger brother, an important figure amongst French intellectuals and a strong influence on the composer).  Like Zarathustra,  this symphonic poem is conceived on an epic canvas.  It brings to mind the works of Messiaen in its daring scale, its brief foreshadowing of the later composers style in the dissonant fugue in La Revolte (The Revolt), as well as the use of the ondes martenot.   Premiered in 1949, Le Docteur Fabricius has since never seen the light of the concert hall, perhaps a victim of its own complexity.

The tonality per se in the beginning (Le Manoir The Manor) is about as adventurous as in Vers a Voute etoilee, but Koechlin quickly shows how much he has developed as a composer in the intervening years. Again, it is the facility with orchestration that impresses the music is atmospheric and organic but with his use of forms such as the canon and the fugue, Koechlin appears more ambitious.  Some movements, such as “La Joie”, are not as successful as others (mainly the slow sections, but also La Revolte). What makes this music so interesting is that advanced musical vocabulary and also that Koechlin continued developing and refining his musical language even in his seventieth year. The orchestra, conducted by the Swiss conductor Heinz Holliger, plays well for such unfamiliar repertoire.  Holligers passion and intense commitment toward Koechlins music infuses every bar, and the orchestra responds with like determination.  Their playing is very good, particularly in the slow sections, but even when the players stretch a little past their collective reach in the more complex parts, their dedication and enthusiasm carry the day.  The performance is vividly recorded, without a hint of sonic cloudiness a must in as intricate and stunning a pair of works as these.

Anyone with even a faint taste for French music should find this vintage both stimulating and highly rewarding.   Like a fine wine, Kochlins music has not only aged well but its complexity and mix of flavors has matured into a spectacularly fine yield.  Now is the time to take it from the cellar to savor and enjoy.