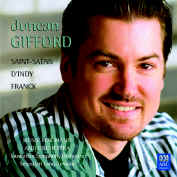 The final piano concerto which Saint-Saëns wrote was, in part, an attempt by the composer to deflect the unhealthy preoccupation that audiences had with his Second Piano Concerto into his other music. On hindsight, we can also see Saint-Saëns’s prescience in incorporating into a symphonic form the so-called exotic flavours from the “East”, which also influenced the aesthetics of his compatriots Ravel and Debussy.

There is an easy, playful pictorialism in the opening Allegro animato here by Gifford, who phrases in long lines and makes light work of holding one’s attention effortlessly. More remarkably, Lang-Lessing responds to Gifford’s inspirational playing with alacrity, eliciting a balanced response from the orchestra. The economical size of the Tasmanian Symphony, well-deserved of its reputation of being one of the best “small” orchestras in the world, certainly helps in this respect, where the delicate filigree of Gifford’s casual pianistic virtuosity doesn’t get smothered by excessive string or wind timbre.

The chosen tempi tend to favour the slow side, allowing Gifford to be contemplative in long breaths without veering into the glutinous indulgences that soloists sometimes use. The central section with the famed Nubian love song passage is played with a numinous lyricism, with a certain emphasis on capturing the right atmosphere. The “boat motor” ostinato of the last movement had a tempestuous rigidity which belies the warmth and sweep of the previous tone-painting, and could have benefited from a bit more rhythmic flexibility. If indeed these are engines which the performers were attempting to portray, they must be some kind of jet-powered propulsion, from the robustness with which Gifford barnstorms away at the keyboard.

The catalogue isn’t exactly overflowing with renditions of d’Indy’s Symphonie cévenole, so Gifford and the TSO’s contribution is quite a welcome one, especially when delivered with the level of poetry and characterization here. As before, both soloist and orchestra have an outstanding empathy with each other, even if some portions of d’Indy’s hybrid composition can sound mechanically contrived in the wrong hands, somehow Gifford and Lang-Lessing manage to make it sound at least entertaining: non-trivial at worst, and positively inspired at best.

As filler, the obscure Les Djinns also makes a curious addition to the catalogue. It was written by Franck (in 1884, the same year as Saint-Saëns’s Rhapsodie d’Auvergne) in response to a request for a short work for piano and orchestra by pianist Caroline Montigny-Rémaury, although she did not ever perform it. Instead, the première of Les Djinns was given in 1885 at a Société Nationale concert by the pianist Louis Diémer who, interestingly, is our link to the other pieces on this program: Diémer was the dedicatee of Saint-Saëns’s “Egyptian” Concerto, and also d’Indy’s piano teacher.

The symphonic poem Les Djinns comes from an eponymous prose poem in Victor Hugo’s Les Orientales collection. As a generous thirteen-minute encore on this album, it contains quite a bit of ham-fisted writing as Franck attempts to musically portray a swarm of evil spirits menacing an Arabian city. Lang-Lessing delivers a persuasive, self-effacing advocacy in bringing Franck’s musical story-telling to life, immensely helped by Gifford’s sparking contribution on the piano obbligato. As a novelty, the music itself is only modestly attractive, and as its obscurity proves, one doesn’t come off with much of an impression apart from the heavy weather which the performers are made to drive through.

The sound is recorded with the usual resonant sonority one has come to expect from the Federation Concert Hall in Tasmania, and the piano is given a pleasant veneer of translucency over the massed orchestral substrata. The works offered in this collection provide an excellent opportunity to explore and build up one’s collection in obscure Romantic French repertoire, assuming one wants either or both the Saint-Saëns Egyptian and the d’Indy Symphonie cénevole. Certainly one could do much worse than the Gifford-Lang-Lessing-TSO partnership, and we should hope to hear more from them in the future.