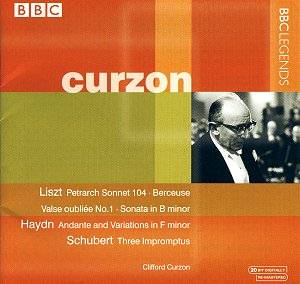 by Derek Lim
Clifford Curzon was one of those pianists for whom the saying “the spirit is willing but the flesh is weak” seems to have been invented. Poetic and crystalline in Mozart, for which he is best known for (his recordings of selected piano concerti as well as the quartets with the Amadeus Quartet remain gold standards for many), he nevertheless played a wider (and more technically difficult) repertoire than is generally known – he recorded Tchaikovsky’s first piano concerto, Rachmaninoff’s second and Britten with the composer, for instance.
In the studio, he was a much different pianist than when he played in concert, sometimes dramatically so. In front of an audience, nerves frequently got the better of him and memory slips and fistfuls of wrong notes were not uncommon. More importantly, though, is the daring he displayed in concert.
Listening to this disc, which stems from three concerts in 1961, the Liszt is what strikes one as being remarkable, though the Schubert and Haydn are also noteworthy. The Petrarch Sonata is played with panaché and verve – certainly mistakes are made and he doesn’t always have the full grasp of the notes but certainly the music-making is masterly and up there with the best – the sweep of the playing is what remains in the memory, long after the mistakes are forgotten.
In the Berceuse as well, there is an extroversion of conception of the work that you might not expect from his sublime Mozart performances – certainly there is introspection where it is called for but again I was surprised at his comfort with the Lisztian idiom.
The Liszt Sonata is the meatiest item on this disc, and for some will be the main reason for purchasing it. Febrile and wildly exciting in places it is, and Curzon hurls himself right from the start into the Lisztian flame, self-immolating in the process, as if lost to a world of his own. Sample his performance of the middle “movement”, and you know that you are listening to a master Lisztian – he handles the juxtaposed changes in mood, rhapsody and rhetoric utterly naturally and in some parts his playing is more sublime than any other account that I have heard in recent memory, and that includes the Richter performances I love so much, Pollini and Zimerman.
The downside to this – and it is significant – is that in throwing caution to the wind, he also plays more wrong notes than even Cortot – more, in fact than any major pianist I’ve heard in this music. The last movement in fact includes a memory slip that alone would probably have led to Curzon forbidding the release of this performance, a pity, since parts of the rest of it are utterly astonishing.
The performance lasts only 25 minutes and 23 seconds and as such must rank as one of the fastest. Curzon lives for the moment, but somehow manages to delineate the general structure of the sonata without doing it too much harm.
Haydn was a composer whose music Curzon should have played more often but didn’t, and this performance of the well-loved Andante and Variations is the only recording that survives of his Haydn. Healthily conceived and not at all like the Dresden china performances of his Mozart, it doesn’t disappoint – his way with a phrase makes it seem utterly natural although from all accounts Curzon must probably have slaved over it at the keyboard for ages – an example of Art concealing Art. Unlike the Liszt sonata, it is perfectly free from mistakes.
The rest of the disc consists of three Schubert impromptus – the E-flat major, G-flat major and A-flat major, works he recorded in the studio. Again the live accounts are more “alive” and volatile than those recorded in the studio, which are more introverted, much more, in fact, like those of his teacher, Artur Schnabel. The E-flat major even comes across as demonic in parts, the G-flat positively seething with torrents of emotion. All in all, Curzon was an inspired Schubertian, and these performances are on a very high level, but if I had to make a choice, I would probably go for the slightly more controlled studio performances.
In all, this is an invaluable release for listeners interested in another side of Clifford Curzon. Fans of his playing will be fascinated by the differences and forgive him his slips – non-converts are advised to sample, if possible, before purchase.