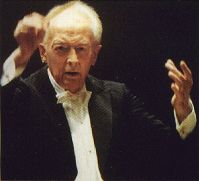 Gunter Wand (left) is the antithesis of the modern jet-set conductor. He deliberately shuns publicity, limiting the number of guest appearances he makes a year, preferring to devote his time and effort to building up the orchestra he is committed to. With such an approach. it is hardly surprising that Wand does not command the attention of the media of the music world. Yet it is this steadfastness and honesty that characterises Wand’s Beethoven. By avoiding the limelight on his person as a conductor, Wand lets his voice speak through the music he creates.In 1982, Wand assumed the post of chief conductor of the NDR Symphony Orchestra and went on to explore the Brahms and Beethoven cycles. Recorded between 1985 and 1988, the Beethoven symphonies exemplify the best of traditional Austro-Germanic interpretation and performance to the present-day listener. Despite the appealing claims of the historically-informed performance (HIP) school, a traditional set played on modern instruments will still remain the first choice for most people coming to the symphonies for the first time. Those looking for a HIP set can always turn to Gardiner (DG), Harnoncourt (Teldec), Hogwood (Decca/L’Oiseau Lyre: budget-priced!), Bruggen (Philips) and Norrington (Veritas Edition – mid-priced). In a sense, Wand’s set distills the wisdom of decades of traditional practice, much like what the recent Dresden Staatskapelle/Davis (Philips) set also achieves, instead of attempting to correct or revise the old ways. This cycle will please those who like their Beethoven grand and Romantic, rather than sparse and lean.
The NDRSO provides a weighty and sonorous sound akin to rich chocolate, and this is further aided by the warm recording. This textural thickness brings attractive advantages in the Third and Sixth Symphonies while reducing the dramatic impact of the Fifth, Seventh and Ninth Symphonies. Despite these inevitable caveats of a complete set, the positive traits of the Wand cycle are substantial. These are mainstream and strongly traditional readings in the best sense. Far from being bland, these are musically fresh and convincing recordings, free of idiosyncrasies and artistic changes that mar some of the other lauded cycles.

The First Symphony is performed in a manner that looks forward towards the future symphonies rather than backwards. Although the Classical structure is firmly in place, all the Beethovenian fingerprints are here, such as thrusting rhythms, dynamic speed changes and instrumental layering. Wand’s is a highly agreeable performance that convinces you that this is young but pure Beethoven. Whereas the First can still be imagined coming out of the minds of Haydn and Mozart, the Second Symphony is truly an experimental work. Known to be Furtwangler’s least favourite of the nine, the symphony struggles to break out of the uncomfortable confines of the Classical idiom. Wand boldly tackles the partially-developed ideas in a confident fashion, making the best of this awkward symphony.The Third Symphony, the “Eroica”, is the major highlight of this set. This is the most convincing and awe-inspiring version that I have heard. Wand simply gets all the proportions right, recreating the heroic journey of discovery that the work encompasses. After the arresting strokes of the opening, Wand takes a fairly brisk pace, although he never seems to rush. The music is allowed to flow naturally, finding sufficient gravity in the Funeral March. A nice middle ground is found in the Scherzo, not too heavy-footed or too light-weight, both which would be inappropriate with the rest of this grand symphony. Wand’s expertise is clearly displayed with the easy handling of the difficult transitional passages in the final movement. Judiciously avoiding plodding speeds (something the highly-rated Klemperer versions suffer from), Wand presents us with a grand vision of this massive symphony. It was his “Eroica” that prompted me to acquire this set, and it remains my top recommendation for the work.The Fourth and Fifth Symphonies are done well, although they are not distinguished in any way. The first movement of the Fourth is somewhat heavy-handed — compare this with the fleet-footed treatment in Bruno Walter’s Columbia SO recording (Sony). The Fifth is good, but it is no match for Carlos Kleiber’s highly dramatic version (DG Originals). Wand does not provide enough pauses in the famous “Fate” motif, and there is a telling lack of hysteria and grandeur in the third movement march and the fourth movement. The orchestra sounds distant, and the opulence of the recorded sound often obscures the complex details, particularly in the Fifth.

This tendency towards muddiness conversely adds to the luxuriant atmosphere of the Sixth Symphony (the “Pastoral”), another highlight of the set. The lack of complete clarity actually contributes to the suggestion of serenity. The lower strings throb beautifully in the first movement. This version may lack the shimmering quality found in other drier recordings, but the idyllic mood is still effectively conveyed. The merry-making peasants do seem a trifle withdrawn, but the rustic picture of the farmers resting after a long season of working the fields is vividly portrayed.

The Seventh Symphony again suffers in comparison to Carlos Kleiber’s maniacal reading (coupled in the abovementioned Fifth, it is a necessary purchase. Buy it NOW!). The buildup in the first movement is relatively ponderous, while the brisk second movement does not really plumb the emotional depths. The third movement is strangely weighty, while the finale is rushed and lacks the dervish grin of Kleiber. Unfair as the comparison may be, Wand’s reading seems almost pedestrian. The Eighth Symphony is an altogether more successful affair, as Wand brings out a delightful Viennese lilt to the fabulous work.

Any cycle of the Nine will inevitably be judged by the Ninth Symphony, the “Choral” Symphony. Happily, Wand’s version is well-taken. It is not as dramatic as Karajan’s 1977 version or as razor-sharp as Gardiner’s, but Wand’s succeeds by delivering a “no-frills” Ninth. The warm recording again enriches the spacious Adagio, but also hinders the cacophonic entry in the fourth movement. The timpani in the second movement sound splashy, more like oil barrels. There is, however, a sombre serenity in the introduction of the Joy theme — a clear sign that Wand grasps the heart of the work. The four soloists are fine (though not superlative) and work well as a team, although the choir is not ideally recorded. There is a hint of routineness, as the choir seems at times to be talking through, rather than singing in a declamatory spirit.

Right: ‘Beethoven Composing the Missa Solemnis’ (1819).
Anonymous, after a painting by Josef Stieler

Overall, this set is very good indeed. All nine symphonies are beautifully sculpted by a conductor who obviously has known them intimately most of his life, and the recording is nicely sympathetic. The drawbacks concerning the Fourth, Fifth and Seventh are, in perspective, minor, as they are being compared to legendary versions. These are well-balanced, sensible performances, lacking idiosyncrasy, very traditional yet not pedantic. It is highly rewarding to listen to a cycle by one orchestra/conductor team — one gets a consistent guiding vision of the symphonies, which is in itself a wonderful learning experience — and the Wand set is the best such cycle available. Due to this factor, this set is THE one to buy if you desire a complete cycle. If you already have a complete cycle, it is still worth your while to get your hands on Wand’s “Eroica” (74321-20280, with the Eighth) and “Pastoral” (74321-20278, with the First).

Let me get something out of the way: this set does NOT replace any of the cycles that have been agreed, by consensus, upon by the majority of listeners as landmarks in the Beethoven oeuvre: BPO/Karajan 1960’s (DG Beethoven Edition) and Cleveland/Szell (Sony) being the most prominent (and Ferencsik and Kegel, both on Laserlight, further down the price ladder). It is fair to say, however, that it joins alongside these distinguished cycles. It is impossible to declare any single set to be definitive or best — the nine symphonies of Beethoven were born out of an age of revolution, and will always remain exciting works, yielding limitless treasures from endless interpretations. For individual symphonies, there are numerous recordings by Furtwangler, Kleiber, Bohm, Bernstein, Walter, Monteux, and others that will out-inspire Wand’s versions — there is no point arguing about that. What is worth noting is that Wand’s cycle is consistently of a high level of quality, both musically and technically. There is much enjoyment to be found in this set, and that is a great achievement in itself.