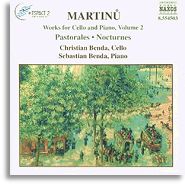 Works for Cello and Piano Vol.2 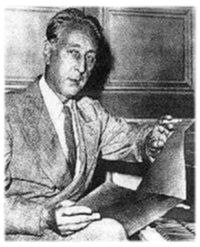 Martinu (left) is not generally associated with much popularity in the classical circles, but like many of his Eastern European compatriots, his music is often rich and colourful, often from both a technical as well as lyrical viewpoint. If Dvorak is to Mendelssohn, Martinů could be to Stravinsky (or thereabouts).

The Rossini Variations really bring to mind Schubert rather than Martinu; it possesses more than enough Italianate wit to pass off as a work by the Italian himself. Composed for the cellist Gregor Piatigorsky in 1942, and as is expected from the opera composer, the basic theme is a singable piece with a sunny, somewhat gentlemanly gait, lightweight yet well-poised, cheery with just a tint of humour – very Rossini. The four variations and conclusion are very short, the entire piece coming in at just over nine minutes. The Bendas provide lively playing, technically assured, though I think it would be better if the cellist used a brighter and lighter tone. His dark and deep-set cello voice sounds best in the nocturne which forms Variation III (marked “Andante”).

The Variations on a Slovakian Theme was written in 1959, the year of the composer’s death. The main theme is full of sorrow, to be played with rubato. The Bendas do so sensitively, though I would prefer more weight. The five variations range from Moderato to Allegro tempo. Variation II is particularly well-crafted, with an attention-getting piano intro leading an energetic passage followed by a noble and sad cello song, a mood taken up in the following variation. The last of the variations is a whirling Allegro, colourful and vibrant, full of technical play.

The longest and the most interesting work on disc are the set of six pieces from Pastorales. It begins with a six-minute Andante, dark and quiescent, followed by a confident and vivacious Allegretto moderato. It is in these pieces I think where composer and the players on record really come into their own. Although the set is called Pastorales, I seem to detect something urban in the music, espescially in the musings of the eloquent third movement Adagio as well as the fifth, a Largo. The fourth movement is a deliberate, mercurial Moderato, clever and witty, a mode repeated in the final movement. All this music manifests something of that Martinu-ian dark, evocative colour and mood, and greatly bear repeated listening and examination. The Bendas bring out the atmosphere and energy of the set with much expertise and familiarity.

The Nocturnes are no less worthy of mention. In Martinu’s best traditions, all four pieces radiate conciseness and subtle intelligence, including the lively Allegretto moderato which ends the set, where Christian Benda demonstrates some of Martinu’s vibrant pizzicato writing. The Suite Miniature (subtitled “Seven Easy Pieces for Cello and Piano”) are light pieces which make a relaxing and satisfying end to this evocative album.

I would say that if one sampled this disc only at the beginning, it might not seem so interesting. For my tastes, the middle pieces are the most interesting, and as we progress there, the players seem more in their element, even in the simple Suite Miniature. Christian Benda is heard best in the Pastorales and the Nocturnes, rather than the Rossini Variations where his instrument seems to need more definition. His partner pianist Sebastian Benda proves a fine accompanist throughout. All in all, a by turns provocative, colourful and relaxing album.

CHIA HAN-LEON has just finished reading George R.R. Martin’s A Storm of Swords and highly recommends it to everyone.