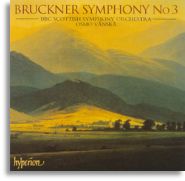 Poor Anton Bruckner. After finally getting his wish to meet Der Meister, Richard Wagner, at Bayreuth in 1873, he received no end of grief over his Third Symphony, dedicated to his hero and quoting from his operas. The 1877 premiere of the work in Vienna under the composer’s direction was a disaster, and the subsequent critical mauling shattered Bruckner’s confidence.

Of course, any work dedicated to Wagner and using his material as Bruckner did was bound to send up a red flag. With the progressives under Liszt and Wagner and the conservatives under Brahms continually at one another’s throats, such a composition would be attacked out of general principles, regardless of merit. To be fair, Bruckner never considered himself in either camp. He was too naïve to realize what a firestorm he would bring down on himself, too gentle to go on the attack, even in self-defense, and too childlike to realize the politics and personal agendas of his detractors. 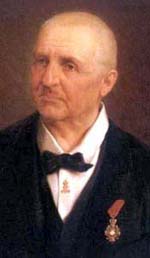 The criticism Bruckner (right) received over the Third Symphony further fueled his already rampant insecurities, which included a mania to incessantly revise his works. Having already worked over the Third three times before its premiere, the composer would personally attend to or allow others to overhaul the score four more times before his death. No less than nine versions of the symphony exist today, complicating the situation of which version conductors today should perform.

So far, I have heard four versions of the Third Symphony – the 1873 original, two editions of the 1889 version, and this one – an 1877 version which interpolates an 1876 version of the Adagio, both edited by Nowak. The 1873, though not as tightly organized as revised versions, contains some beautiful passages, even more Wagner quotations than in later versions and a first movement coda so different as to be an entirely different concept. The 1877, tighter than 1873, is still occasionally given to rambling, especially in the first movement, but not annoyingly so. The 1889 is the most cogent version, but sometimes makes its points a little too quickly for the benefit of the music.

This is Osmo Vänskä’s first Bruckner recording, but he already shows a mastery of this composer’s music. He does not drive the music too hard, allowing ample opportunity for it to breathe without losing direction or letting the music go slack. Neither is this a performance that lacks drama. From the mysterious opening measures, the conductor very effectively points out the currents of tragedy and malevolence pulling under the surface of the music. While also demonstrating an excellent sense of Bruckerian ebb and flow, as well as allowing the sunnier moments to shine like sunlight illuminating an Alpine meadow in late Spring, Vänskä allows a gentle, sometimes almost imperceptible tension to pull us along and keep the music together.

The Wagner quotations are highlighted without being pulled out of context from the rest of the work, and add to the shadowy quality underlining the movement. At times, such as the section beginning at 8:05 in the first movement, they become both hauntingly reverent in tone and extremely spooky in foreshadowing darker turns in the music.

When the music does become bold, such as the restatement at 11:01 and the dramatic outburst immediately following (a passage that always reminds me of knights in armor charging forth on horseback to do battle), Vänskä does not suddenly speed up to give those passages a shot of adrenaline. Nor does he have to. Ever since the quotation at 8:05, he has been slowly ratcheting up the tension without our being fully conscious of it, and by not speeding up the tempo, he gives the restatement tremendous weight and power. Neither does the music lose tension after the passage ends, but keeps building in cumulative power until the coda.

The coda is my only complaint about the movement. Like George Szell in his recording of the 1889 version (Sony 63519, with the Eighth Symphony – two discs, budget-price), Vänskä speeds up considerably here, and while this can be exciting, it actually dissipates the tension that has been building throughout the movement. Kurt Sanderling, in his recording of the 1889 version with the Leipzig Gewandhaus Orchestra (Berlin Classics 2151 – mid-price), keeps a steady pace, and while the passage is no less exciting, the resulting massiveness and force is truly devastating.

The Adagio is perhaps the high point of this performance. In the notes for this recording, Stephen Johnson maintains that this version of the Adagio is simpler and more gravely eloquent at times than subsequent revisions of the movement, and more Brucknerian in its expansiveness than the 1873 original. It is definitely less perfunctory than the 1889 revision, with the extra time and notes lending the music a timelessness and magic to which Vänskä and the BBC Scottish Symphony Orchestra fully avail themselves.

In the hands of these performers, this movement takes on near-human characteristics. It not only sings, but sighs, hesitates, hopes and remembers fond memories. This is the first of the “prayerful” adagios for which Bruckner would become known, and a listener can detect a sense of divine communication, with inner conflict and soothing consolation alternating throughout. Adding to this dualism are the two Wagner quotations used here – from the chorus “Gesegnet sollst du screiten” (“Go forth with blessings”) from Lohengrin and the cascading string figurations from Tannhäuser. Both operas feature a medieval Christian knight – one chastely married, the other un-chastely devoted to Venus, the goddess of love. 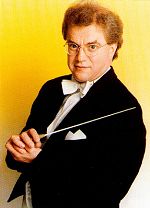 In the scherzo, I have never heard the string figures that open the outer sections done with such a combination of teasing beguilement and bump-in-the-night dread. Vänskä (left) and the orchestra give the outer sections considerable bite and power while making the central trio almost airy in its lightness, and spring the ländler rhythms throughout the movement very engagingly. Though the performance itself seems a little too refined to make the music seem truly rustic, it is still a highly effective one, and the orchestra’s ability to change gears so completely between the contrasting sections is literally amazing.

Conductor and orchestra also make the most of the finale, the most problematical movement here (Bruckner did not really master effective finales until the Fifth). They lend real flair to the rushing music that opens the movement and reappears occasionally afterwards, as well as considerable charm to the dance music and solemnity to the chorale Bruckner wrote as contrasting elements. The composer does not attempt to blend all these elements, but juxtaposes them, wanting to show the joy of life (the dance music) alongside its sadness (the chorale). Since these elements are so disparate, holding the movement together can become a serious challenge.

Vänskä does an expert job of maintaining the general flow here, giving each musical style its due while not allowing the proceedings as a whole to unduly fragment. If the level of energy is not quite as high as in the other movements, it is fully understandable, considering that conductor and orchestra are juggling so much here already. That is not to say they have their hands too full to make the music exciting – it is actually very stirring, and has an overall sweep that will keep you listening very intently – but there is much more going on here than sheer thrills. As in the scherzo, the orchestra differentiates the various styles of music here so convincingly, and plays those styles with such versatility and contrasting individuality, that the result borders on the miraculous.

This is a highly recommended release, not only for the high level of conducting and playing, but also for a version of this symphony that is not played as often as perhaps it should. Special mention must also be made for the BBC Scottish Symphony Orchestra. Though the orchestra does not possess the tonal sheen of the Vienna Philharmonic – a benchmark to which any orchestra performing Bruckner is inevitably compared – it acquits itself very nicely, with excellent strings and warm brass that only occasionally becomes more assertive than necessary. I am looking forward to hearing more Bruckner from them as well as Vänskä.