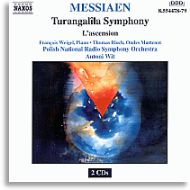 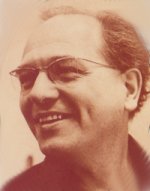 The introduction of Olivier Messiaen’s two most important orchestral works to the super-budget catalogue – here under Naxos – cannot be too highly overstated. While there have been several other renditions of these works available as an increasing awareness of Messiaen’s compositions grows, none have (at this time of writing) yet appeared in this price range; certainly not the two together, in any case.

The Turangalîla-Symphonie is a truly massive paean to spirituality, with its overt influences from Hinduism. The title itself is in Sanskrit, made up of two words: “Turanga” denotes time, surging ever onward, held back by “Lîla”, which signifies “play”, articulating the flow of time with drama. Together they encompass the compound notions of oppostion, creation and destruction, and love.

The work owes its existence to the conductor Sergei Koussevitsky, who commissioned Messiaen to write something for the Boston Symphony, with complete freedom as to the kind of work, its length and size, and most importantly, the liberty of taking as much time as Messiaen needed to finish it. This beneficence was promptly repaid by the composer, who – although not exactly a fast or prolific composer – required only just over two years to come up with Turangalîla.

Ondes MartenotWith the advent of electronic sound after the turn of the previous century, a variety of exotic electrical instruments started to appear. Of them all, the only extant instrument still in use (more or less) is the ondes Martenot, ondes being French for “waves”. It is named after its inventor and dates from the late 1930s. 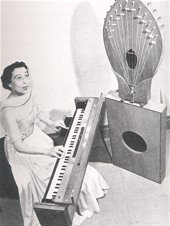 Sistine Martenot, sister of the inventor of the ondes Martenot, Maurice.

The reason for its endurance, not including its potentially fascinating variations of sound and timbre, has to be attributed to the composers who wrote important works for it – much in the same way that the basset horn, for a time, was kept alive by the music of Mozart.

Apart from Messiaen’s Turangalîla-Symphonie and Trois Petites Liturgies, we can also include Honneger’s Jeanne d’Arc au bûcher and Koechlin’s Seven Stars Symphony as key works of the period which featured the instrument. In the latter-named work, its sound was used to portray the character of no less a luminary than Marlene Dietrich.

The sound of the ondes Martenot is an eerily piercing wail; in some ways artificial and inhuman, in other ways mysterious and fascinating. In Norman del Mar’s seminal treatise Anatomy of the Orchestra, he includes it rather tellingly between the zither and the human voice.

The instrument can be played in two ways, described in notation as au clavier and ruban. The former makes use of the keyboard, a five-octave span similar to that of a piano, with the additional ability of broad vibratos and quarter-tones. The latter style is an entirely different affair: the player wears a metal ring on the right forefinger, controlling a ribbon across a condenser to produce the desired pitch, using the keyboard as a visual guide to achieve portamento and glissando effects.

The result was a massive ten-movement work built on diatonic chords and systematically derived chromatic modes based on Asiatic Indian and Balinese gamelan influences. Bernstein gave the premiere of the work in Boston in December 1949. Significantly, the instrumentation included, in addition to a piano obbligato and huge percussion section, the electronic ondes Martenot. The nature of the music, freely formed after four central themes “found anywhere in the work”, is radical and abstruse, and for most listeners, quite an unforgettable experience.

Antoni Wit takes on this Everest – more accurately, this range of Himalayan peaks and summits – with an irrepressible earnestness and flair. Maestro Wit has had the benefit of having worked with the PNRSO for a long time, as principal conductor and artistic director for the last seventeen years, and manages to elicit an empathic response from his players in this lengthy and challenging work.

The introduction is strong and the first exposition of the love theme is admirable. François Weigel gives virtuosic support from the piano; as does Thomas Bloch on ondes Martenot. The first dream sequence of Turangalîla is a schizophrenic mise en scène of moods, leading up in repeated sequences to the dream theme. The conflict is would up very tightly by Weigel’s obbligato, leading into the metamorphosis of the second movement: his cadenzas are brilliant.

There is real swing in the jazz-like fifth movement – a strongly-characterized joy, as it is titled, in the blood of the stars. Maestro Wit has no lack of lyrical freedom, with a definitively atmospheric contribution from the ondes Martenot – not positioned here as an out-and-out concertante instrument despite its novelty, but more of a willing accompanist in the rank-and-file. The conclusion is resounding.

The following movement is sharply contrasted against the preceding one with a restlessness that propels the music onwards – here again with some help from the ondes Martenot. The pianistic contribution in the second Turangalîla sequence is exuberant and wildly ecdysiastic (in the aesthetic sense, of course.) I found it “unputdownable”, to use a literary reviewing term, in listening to it.

The Développement de l’Amour section is rendered by Wit and the PNRSO as a stimulating – in more ways than one – eclectism, setting the stage for the last two movements. In the finale, the interplay between the orchestral tuttis crafted by Wit and the solo piano expositions by Weigel, against the electronic canvas provided by Bloch, raises the music to the level of apotheosis.

This indulgent reading, which is spread across two discs, may be excessively lengthy and quite possibly anaesthesize the newcomer to the delights to be experienced herein. No matter; the work can also be appreciated in small parts, but taken in the greater whole, there is a discernible and purposeful emotional objective which Wit manages to discover in this music.

In the less-than-epigrammatic filler, Wit offers L’ascension, the most significant and last orchestral output in Messiaen’s works of juvenilia. The first verse of the méditations finds long, sonorous brasses on sustained chords which are thoughtful and contemplative. The second verse contains some excellent woodwind, although the conclusion is slightly less fulfilling. There are passages reminiscent of Turangalîla in the third verse, with the orchestra superbly virtuosic.

On the whole, this is an outstanding performance of Messiaen. Wit manages to capture the Frenchman’s idiomatic style very well and this rendition, amongst others, stands as a testimonial to the capabilities of the PNRSO. There are no complaints about the quality of the sound, which is bright and fresh. Weigel and Bloch also deserve a share of the credit: Weigel taking on his demanding part with an incisive and deeply-felt contribution and Bloch evoking a very convincing soundscape indeed.