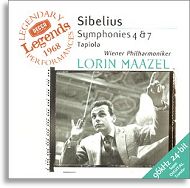 If any set of performances deserved to be called legends, it is these. Not only were they the highlights of Lorin Maazel’s Decca Sibelius cycle of the late 1960s, but it was also the first and, so far as I know, the only time the Vienna Philharmonic ever recorded the Sibelius Fourth Symphony. According to Guy Richards’ biography of the composer

, when Paul Weingartner tried to conduct the work in Vienna in 1912, the Philharmonic members simply refused to play it. To go from adamant refusal to recording the work for a young but dedicated conductor was a huge step, especially for as conservative an orchestra as this one.

Of course, this fact would mean very little if the performance were lackadaisical or uncommitted. That is not the case here. The playing here is sharp and polished, fully focused on the music at hand. As for the interpretation, while Herbert von Karajan’s three recordings of this work are darkly brooding, and Osmo Vänskä’s interpretation

is one of rare eloquence, Maazel’s view is one of throat-gripping drama and intensity. This performance grabs you from the opening bars and does not let go until the end. It is definitely not to be missed.

In the case of this symphony’s history, the metaphor for Maazel’s performance is especially apt. In 1908, Sibelius underwent a series of 13 operations in Berlin to remove a growth in his throat. Though this growth was found not to be cancerous, there was no guarantee that cancer would not manifest. As a result of this and severe indebtedness partly due to medical expenses, Sibelius lived in constant tension and fear of imminent death for several years. Despite all this, there was one positive effect: The severity of Sibelius’s illness accelerated his musical evolution, a process already begun with his Third Symphony.

In September 1909, Sibelius’s neighbor and brother-in-law, the painter Eero Järnefelt, invited him to travel with him to Koli, a remote mountain area in North Karelia. The outing allowed Sibelius an opportunity to reflect on his life and work, and that plus the icy, rugged terrain not only inspired him to compositional action but also profoundly influenced the nature of the new symphony itself. Even with this inspiration, however, it took him more than two years to complete the score – far longer than any of his earlier three symphonies.

Stark, at times unsettling and at others achingly beautiful, with its musical materials rigorously based on the tritone – traditionally the diabolus of music – Sibelius seemed to pour all his anxieties and dark thoughts directly into this work while graphically capturing the frozen, desolate winter landscape of Koli. The Fifth Symphony may be more popular due to its sunnier, more Olympian nature, but the Fourth is where Sibelius truly pushed the envelope of tonality, even while calling the work “a reaction against modern music.” In that sense, the Fourth is Sibelius’s most adventurous and uncompromising tour de force.

Even in the bleakness, however, there are gleams of light and moments of pure splendor, all of which Maazel and the Vienna Philharmonic capture as well as the work’s shadows. While not slighting the undertone of potential menace in the scherzo, they allow the movement’s general radiance to shine through the clouds. Maazel builds the final allegro with a sure hand and an excellent feel for he work’s rhythms; and while the despair of the preceding movements returns in the coda, stomping out the joy of the rest of the movement and, in effect, snatching defeat from the jaws of victory, the final cadence is not played without a glimmer of hope.

The ensemble playing is not just outstanding, but incredibly sensitive to detail. When the violins begin their passagework at 3:37 in the slow movement, there is an added delicacy that perfectly captures both the tone of melancholy and the fragility of thin ice over a pond, ready to crack with the least amount of weight at any time; and they maintain this delicacy even as they lean into the music beginning at 7:10. The solo work is just as impeccable, including some incredibly expressive cello work in the opening movement and an excellent flute solo at the start of the slow movement.

By the time Sibelius wrote the Seventh Symphony, he had refined his symphonic style and condensed his use of structure to the barest of elements. Rather than limiting him, this restriction freed his sense of fantasy, and urged him to incredible feats of musical imagination and resourcefulness. Nevertheless, he struggled with the Seventh, telescoping what was originally planned as a three-movement work into one continuous movement of power, majesty and yearning. It seems hard to believe that he even struggled with whether or not to even call it a symphony (at the premiere performance in Stockholm in 1924, it was labeled a “symphonic fantasy), because the music is so resolute in intent and granitic in its resources that it is impossible to think of the work as anything else.

My favorite version of this work has long been Leonard Bernstein’s with the Vienna Philharmonic (DG 415305), one of the best of his late recordings that has inexplicably gone out of print. Bernstein delineated the music beautifully in a magisterial and unmannered performance that gave full rein to Sibelius’s extraordinary feats of imagination and would have done his mentor Serge Koussevitsky (an early champion of Sibelius and especially of this symphony) extremely proud. 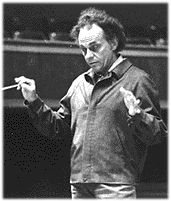 While not as commanding as Bernstein nor as overwhelming as in his own performance of the Fourth Symphony, Maazel leads a fleet and sensitive account of the Seventh that really stands out. Though the brass is not as well captured as in Bernstein’s recording, the string work is exceptionally nuanced and fluid, and Maazel (right) conveys an excellent sense of flow and movement. He is also more committed than Vänskä

, who seems strangely washed out after his exceptional Sixth Symphony. If in the long run I find the Seventh’s final moments more cathartic and earth-shattering in Bernstein’s hands, Maazel brings the same multi-faceted aspect that he lent to the coda of the Fourth. There is twilight here, but also hope for another day.

Maazel’s Tapiola, on the other hand, is simply incredible, and kudos to Decca to unearthing this performance from their vault. If the Seventh Symphony evokes a great range of sunlit mountains, Tapiola plunges us into the depths of a thick, multi-shadowed forest. There is a dark, elemental power to this score that can be unsettling, as though the elements themselves have been contained in it and violently struggle to break free.

Originally released on LP with the Fourth Symphony, Maazel’s Tapiola shares the Fourth’s extreme concentration, adding a more pronounced passion and a fierce wildness that is just barely kept in check. The Vienna Philharmonic again outdoes itself, combining conviction, delicacy, power and a dangerously dark beauty in a performance will not only keep you listening but will give you goosebumps. It is recordings such as this one that make one wish Sibelius had not given in to self-doubt and allowed his Eighth Symphony to see the light of day, as it definitely shows the composer at his best.