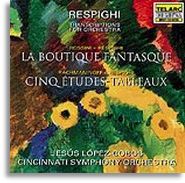 It is interesting to note that when Sergei Koussevitzky, champion of the émigré Russian composers and conductor of the Boston Symphony recommended the name of Ottorino Respighi (left) to Rachmaninov as the orchestrator of the Études-tableaux, Rachmaninov was so taken with the idea that he personally selected five of the seventeen piano pieces. Additionally, he also wrote a letter to his young protégé, narratively detailing each of the portraits depicted in the patently programmatic “Picture Studies”.

Here, the Cincinnati Symphony Orchestra – perhaps better known in their alternate guise as the Cincinnati Pops Orchestra, under Erich Kunzel – teams up with Jesús López-Cobos. López-Cobos has previously recorded Church Windows, Brazilian Impressions and Roman Festivals (Telarc CD-80356) with this orchestra, in addition to an earlier collaboration on Ancient Airs and Dances and Trittico Botticelliano (Telarc CD-80309) with the Lausanne Chamber Orchestra. This is a continuation of his exploration of Respighi’s symphonic repertoire.

The playing of the Cincinnati Symphony, as one might expect, is sumptuous and full of verve. The orchestra glitter and sparkle with Respighi’s most lush tonal colours within the resonant atmosphere of Music Hall, vividly bringing to life the musical tableaux originally penned by Rossini and Rachmaninov.
Colours to the Page: Orchestration

The comparison between pianism and orchestration can be likened to that between a pencil sketch and a watercolour on canvas: the former depicts images only in stark lines and gradiated shades of grey, while the latter is a feast of colours upon the eyes.

With the advent of Romanticism, the trend of Classicism where the orchestra was viewed as a holistic unit whose objective was the production of harmonious and graceful sounds was changed. High instruments got the melody, middle instruments filled out the harmonies and the low instruments provided the rhythmic accompaniment – and there was little variation from this norm.

With the Romantics, things changed. Woodwinds – which normally doubled the string parts – started getting their own expressive passages: witness the oboe cadenza in the first movement of Beethoven’s Fifth. The variegated instruments of the orchestra were no longer used to fill out a harmonious sound, but to create sonic effects and evoke sharper emotions. It became more dramatic and pictorial: Berlioz’s Symphonie Fantastique or Mendelssohn’s Midsummer Night’s Dream music, for example.

Artistic terms like “dark” and “light” were borrowed into musical vocabulary. The concept of sound being associated with colour led to composers using daubs and splashes of a particular instrument’s timbre to add depth and breadth to a composition. Some composers took this to extremes: Scriabin, for example, associated the C major chord with “red”.

This, of course, demanded a very extensive practical knowledge of the orchestra’s capabilities from the composer, to use the palette to best effect. Composers had to know the intricacies of their instrument’s capabilities: the addition of valves to brass, for example, gave rise to Romantic passages of music all but unplayable on earlier valveless instruments. Less often mentioned, perchance, is the fact that composers, in their quest for effect, did write unplayable passages for instruments from time to time – albeit with the best of intentions.

Rossini is perhaps as much underrated as a composer of beautiful lyrical melodies as Respighi is as an orchestrator. The Fantastic Toyshop, commissioned from Sergei Diaghilev for the Ballet Russes, possibly is an ideal showcase to put these misconceptions to rights.

The music opens with a loud, ambient fillip, characteristic of the Cincinnati Symphony’s fetish with exaggerated percussion and bass timbres. The Overture is built up with much grandeur, before segueing into the coy Allegretto of the second movement which sounds not a little like a chanson from a Sondheim musical – such is the level of lyricism which López-Cobos draws from his players.

The highlight of the piece arrives early on, in the whirling Tarentella (from a set of twelve short piano pieces Rossini wrote entitled Les soirées musicales). The orchestra, interestingly, have recorded this work – or its close approximation, in an arrangement prepared and conducted by Erich Kunzel – ten years previously, in an anthology entitled Trumpet Spectacular (Telarc CD-80223) which featured Doc Severinsen.

But the high-octane adrenaline rush of the opening sections start to flag thereafter: the following character dances, on the whole, have no special individuality, even if the playing is polished to a sheen with opulent strings and brasses. The winds are comparatively restrained.

There is a hint of self-consciousness, a holding-back of sorts, in the Waltz, as with the Valse lente: one senses that the personality of López-Cobos’s reading is somehow worn down by the impartiality of the orchestra. The Nocturne wants for more poetry; the Galop is agreeably vivacious and full of panache, but this is perhaps an instance of too little too late.

For Rachmaninov’s tudes-tableaux – surely, an even sterner test than Rossini – the Marche Funèbre is searching and digs deeply, but misses the last degree of lugubriousness. On the other hand, the diminuitive La Foire – a scene at a fairground – is simply lovely and evocative. The tone picture of Little Red Riding Hood and the Wolf is fraught with menace, as it should be, with full orchestral crescendos and rumbling basses. In the final analysis, these musical portraits somehow come off more successfully than Rossini’s ballet setting.

Even allowing the music to speak for itself, Respighi’s sonic dress is so corpulent there is the danger of sounding weighty if the tempo is not achieved correctly. In this respect, López-Cobos manages to pull the orchestra through. What is missing is the culmulative excitement as the stories (as it were) unfold; what is not missing, though, is the brilliant sound and balance, which is up to Telarc’s spectacular standards.

Fans of the Cincinnati Pops who enjoy their cover versions of popular movie themes might find this an interesting alternative repertoire of their favourite orchestra, as will audiophiles with, ah, perhaps less discriminatory tastes in the aesthetics of interpretation.

But there is nothing new about the uneveness of the results when the Pops orchestra turns Symphonic. As much as the high technical quality of the musicians are still evident, their ventures into the classical hallowed ground have been in the past and still is now, it seems, largely a mix of hits and misses.

BENJAMIN CHEE once played in a friend’s experiment in which a Mozart symphony was transcribed for seven B-flat clarinets. The noise was simply undescribable.