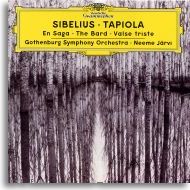 What makes this En Saga different, on first impression, is the rather quick tempo which Järvi takes for the opening stepwise/”trudging” motif. He proves himself as a master of pacing, though, by sensitively moulding this unusual speed into the main section of the work. What emerges is a more regal and dignified account of the tone poem, as opposed to the raw fury of Ashkenazy’s reading (Decca), or the mythic magic of Berglund’s.

Järvi (left) and the Gothenburg players bring into the music a sense of broad epic, of smooth snowy vistas – don’t get me wrong, this saga does not present its adventurers with an easy trek. Rather, it presents them the heroism of the mythic landscape, the musical and spiritual meditation of its Kalevalian inspiration – witness the bittersweet sigh of the closing clarinet hymn, forlornly sung by Urban Claesson.

The same sort of treatment is offered in the performance of the first of the four excerpts from Kuolema – the world-famous Valse triste. Its climax here does not have the fury of other readings (Karajan’s 1980s recording comes to mind) – and in this way impresses me with its dedicated unity of atmosphere and interpretation. The waltz rhythm is less obvious here, which is an interesting variation for this much-recorded work. Even in the final excerpt, the Valse romantique, the sensation of dance is de-emphasized, it seems, in order to showcase a rather more smoothened (and soothing) flow in the music.

The performance of the “Scene with Cranes” exhibits a tendency for faster than expected tempo as well. The crucial clarinet cries are done with a spot too much theatrical contrast and too little sense of mystery, but on further listening, I find it is nevertheless evenly sustained, atmospheric and well-paced. By and large though, I still prefer Simon Rattle’s rendition on EMI.

One exceptional skill that Järvi possesses is his expert hand at crescendo/diminuendo and the building/resolution of tension around climaxes. This is put to good use in the rendition of the Spring Song, an orchestral paean to the natural grandeur of the season. Järvi pulls no stops in the voluminous climaxes, and judges the sequence of growing passages with noble exuberance.

The Gothenburg orchestra is as fine as ever, from their glorious days at BIS to today. They have a richness and togetherness of sound which, in combination with their conductor, has formed a model of Sibelian soundscapes (matched only by the Lahti Symphony). Just listen to the detail of the individual sections of instruments within the fused voice of the entire orchestral picture – the pizzicato in Valse triste or the luscious Canzonetta (of Kuolema), for example.

Of all the music on this disc, there are two high points: The Bard, and Tapiola.

I have been a longtime worshipper of Järvi’s classic and unbeatable 1986 performance of The Bard on that old BIS CD (CD-384). This “new” version was recorded in May 1994, and for the most part (especially the first two thirds), sounds very similar in spirit. It is almost another case of Järvi’s two recordings of the Andante Festivo, again the old one on BIS and the new one on DG

This newer DG version shows a little more of the score’s details; or perhaps another way of putting it is the balance of instruments is slightly different. In the final analysis, I still prefer the older recording – it still retains a greater sense of forlornness, of loss, sadness and the finality of life in its last heroic breaths. In this DG reading, there is again a sense that Järvi is smoothening the music. The great cry of brass that forms its climax is handled with more feeling in the BIS performance, and the ending of that all the more heart-breaking. The single note of the tam-tam is hardly audible in the DG version, whereas it is one of the most spine-tingling details of the BIS recording. Nevertheless, by and large, both performances are very satisfying, the BIS version being the more touching. 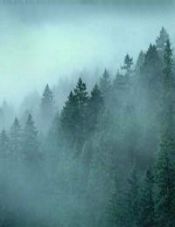 And then, we come to Tapiola, certainly one the holiest grails of Sibelian conducting. This time, Järvi’s sense of orchestral breath and unity of sound and sequence is hardly a fault. This Tapiola breathes, flows, floats, drifts, burrows, rustles, grows and seethes with measured – but quickening – pace.

This forest isn’t as dark and sorcerous, perhaps, as the classic Karajan reading of 1984 (also on DG), but it has an underlying excitement balanced with a light concentration. What I am trying to describe is a sense of smooth flow fused with a soft(er) tingle of magic. Tapio here seems not so much the brooding dark titan, but more an ethereal misty presence wafting through the forests.

The storm section towards the end, as expected, did not match the blizzard of the most fearsome performances, but it fits into Järvi’s interpretive choice. Once again, watch how, at the end, he raises a heaving crescendo which only slides magically away into quiet of the final chord; and this concluding B major string hymn is very serene indeed, much more than the usual. A very interesting Tapiola then, more light than dark.

Despite the small reservations I have mentioned above, this is definitely a very welcome and recommendable disc. Perhaps only those who demand darker and more emoted interpretations should stay away. Personally, I enjoyed this disc immensely – it is good to hear some variation on some oft-recorded works, the unity in the execution of these works as an album, the fact that Järvi and the Gothenburg orchestra remains good, and last but not least, a new recording of that under-recorded and under-rated masterpiece, The Bard. (But if you can, you should still get the BIS version).

In Singapore, BIS discs can be found or ordered from HMV (The Heeren, City Link).

The Inkpot Sibelius Nutcase does not visit HMV very often. When he does, he has the tendency to reduce the amount of Sibelius CDs they are carrying at anytime by about 5-10%.