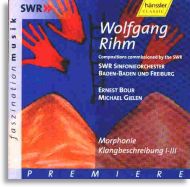 By his own account, Wolfgang Rihm writes that “music must be full of emotion, and the emotion full of complexity.” This calculated significance of music as a cathartic fount for emotions and pathos is perhaps what characterizes Rihm’s work as the point of departure from the body of dodecaphonic composers of the previous generation – Webern, Schönberg and Berg.

It is not just dissimilitude alone that marks Rihm as the prodigal, however: he has hitherto forayed deeply into realms of complexity and presentiment, carving for himself a niche much in the intellectual musical lineage dating back to Beethoven, Bruckner, Wagner and Mahler.

Morphonie is one of Rihm’s early cornerstones that already heralded the emotional disposition of his music. Premiered at the the Donaueschingen Music Festival in 1974 when the composer was only twenty-two, this music was at the same time both intensely stirring and yet shockingly daring, the expression of a bold new voice bursting on the scene.

There are unmistakable elements of Berg and Mahler, combined with Romantic yearnings (for want of a better word) and forward-looking hints of Rihm’s muscular, almost sculpture-like treatment: musical contours and masses carved out with tactile quality and unflinching shape and colour. 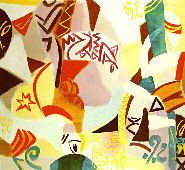 An intensely organic work from start to finish, Morphonie exhibits idiomatic characteristics of Sturm und Drang with jagged instrumental lines punctuated by strident attacks from winds and percussion, with moments of tranquility woven into a riotous tapestry of sound. Even then, Ernest Bour takes these quiet moments as counterweights of sustained sounds, fraught, as it were, with brooding and disquiet.

The quartet soloists, who play concertino to the orchestal ripieno, respond excellently with tension-laded passages of loneliness and pathos. At the end of a forty-minute journey – for Morphonie is that long – we can hear the thickly painted strains of a “song of farewell”, noble and stoic, which tips its hat to Mahler.

Just from the listening, this is actually quite difficult music to perform. The SWR Orchestra under then-director Ernest Bour (in 1974) is quite at the top of its form. This music, as all of the works on this disc, was originally commissioned by the orchestra. Recorded in the studio at the time of its premiere, the quality of sound is excellent, even if the lateral focus seems to give a viscosity in the tutti passages. For sure, the difference in the quality of sound is clearly discernible from the latter works, between which there is a thirteen-year interval.

Klangbeschreibung (“Sound-Description”) is no less seminal than Morphonie, although more than a decade spans these two works. If nothing else, Rihm’s narrative vocabulary of the 1970s gives way to more laconic and enigmatic devices of the late 1980s. Like its sibling, Klangbeschreibung was also premiered at Donaueschingen – in 1987 – and also recorded at that time, when the work was still freshly written.

Klangbeschreibung is a tryptich of varying orchestral sections: a dialogue for three orchestral groups and another huge orchestral movement, twice as long, framing a central section that serves as the emotional core of the work, a setting of Nietzsche for four female voices, five brass instruments and six percussionists. The two bookending movements are characteristically similar, although there is a rather purposeful progression of style as the music unfolds.

This development is, in fact, at the very heart of Rihm’s musical idiom: it has been likened to a type of poetic speech with random words and syllables placed side by side, which somehow find their way into a musical unity. Under Michael Gielen’s advocacy, nothing is allowed to detract from this musical argument and the gradual revelation of the symphonic plan. There are lingustic touches which span a gamut of emotions: I found myself disturbed by the highly-compressed brass interjections in Klangbescheribung I, and equally “comforted” by the blunting wind contours.

The music (and listener) is never given an opportunity to settle, which says much more of the uncanny powers of concentration of the SWR Orchestra and its conductor. Like Morphonie, each of the two outer movements has a distinct coda that draws the work to a reposed conclusion. But it is the middle movement of Klangbescheribung which is enigmatic. 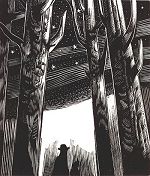 Using only selected words from a passage of Nietzsche, The Wanderer and his Shadow, Rihm’s music is pared down to the marrow of disembodied substance, with fragmentary interjections by soli brasses and voices. These threadbare contours contrast very sharply with the outer movements, crafted with a great degree of skill, reminiscent of a surgeon’s scapelwork and demonstrative of Rihm’s signature talent: hewing not just huge chunks of sound from the orchestral dross, but also chiselling in great close-ups of detail with precision.

In Our Man in Havana, the English master of prose Graham Greene writes that:

“Schools were said to construct character by chipping of the edges. His edges had been chipped, but the result had not, he thought, been character – only shapelessness, like an exhibit in the Museum of Modern Art.”

Greene plangently had mastered the art of paying a compliment and an insult in the same breath – but in applying a paraphrase of this observation to Rihm, one finds that the supra-musical drama of what “happens” in his music is purely a mass, shapeless or otherwise, of violently hewn tone-colour. But this is perhaps the nature of Rihm’s musical aesthetic: a sculpture of abstracted sounds.

There is a marked improvement of the sound on Klangbescheribung over the earlier recording; certainly, there are sections which border on demonstration-class. It says a lot for the level of sound engineering that the massed orchestral sections come through quite cleanly and vividly.

That said, these works are quite long. Morphonie, as mentioned before, is a forty-minute juggernaut; the three Klangbeschreibungen are twenty, thirty and forty minutes respectively. Spanning more than two hours across two CDs, the intensity of this music makes great demands on the level of concentration on the part of the listener – definitely not a vehicle for those looking to test-drive Rihm.

An intriguing disc, then, with a higher than usual difficulty rating, and fitting very much into Hänssler’s series on Faszination-Musik. But this is strictly only for afficionados of the avant-garde, or perhaps those seeking to join their ranks.

Benjamin Chee feels that there are too many contemporary artists who simply just avant-garde a clue about aesthetics at all.