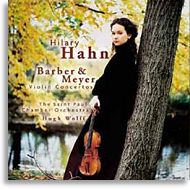 This was my first encounter with Hilary Hahn’s musicianship (though by the time this review is published, I would have seen her ‘live’ in Singapore on Nov 18 ). What strikes one immediately is her absolutely mastery of her instrument, which multiplies and graces her maturity of expression. Graces I say, because there is no hint of something … shall we say, “arrogant” about this musicianship. It is not glorified, yet is glorious. It glows with beauty, but is presented with humility. Maybe it is the music, but somehow, I feel Ms Hahn has a big part in it.

It is not just a matter of articulation, where the 20-year-old is effortlessly musical and, well – perfect;there is, at least on my first few impressions going through this disc, that quietly ecstatic vibrato. She has a wonderful instrumental voice, which sings so beautifully and tingles so naturally in the gorgeous Andante. She bites into her entries without any ugly cracks – indeed, her playing is glowingly smooth.

The Saint Paul Chamber Orchestra under Hugh Wolff accompany her with well-matched tone, pace, colour, and dynamic levels. The recording itself balances soloist and orchestra in a warm and amiable acoustic. Witness the wonderfully subdued end to the first movement…

… which leads into the aforementioned heaven of the Andante. It begins with a sweet oboe solo, the mood taken up by strings, then handed to clarinet and flute. The St Paul CO draw a serene, a little bittersweet, soundscape which makes a more than perfect base for Ms Hahn’s impassioned solo. Her ascents into the heights are lovely to hear, wonderous to behold. And once again that meditative, philosophical atmosphere, which is held to the end.

The speedster appears first in the finale of the Barber – and speedy it is indeed! As I write this, I fill myself with expectation regarding that Shostakovich No.1 she is going to play this weekend at the SSO – oh my, I’m now utterly embarassed that I’ve taken so long to listen to her. The St Paul CO bravely and successfully matches her pace. Suddenly, that final passage of virtuosic insanity – and all of 3’25 is gone. Bravo!

The Edgar Meyer work was written in 1999, the composer a friend of the violinist. Hilary notes – with that same grace she displays in her playing – how Meyer faxed each page of the concerto to her as he finished it: “and [she] learned it as it arrived. If this is not the world’s first faxed concerto, it is certainly the first [she has] ever received that way.”

It is an instantly accessible work which I’m sure will find universal appeal easily. The clever orchestration is colourful without being garish; that is, making good use of its solos for various instruments in the orchestra. The first movement is 10 minutes long, energetic (but not hectic), with a motoric figure on strings punctuated by the solos just mentioned. The violin sings, quips and chatters in amidst this concise soundscape, very attractively. There are a couple of almost-false endings, which cleverly returns to earlier material, creating a pleasing familiarity. This flows seamlessly into the second movement, consisting of a thrice-occuring passage of breathtaking tranquility through which Ms Hahn’s artistry sails, plus an energetic central section.

When I first met Hilary Hahn the person – there she was, perfectly normal and unfazed, youthful. I didn’t totally agree with her Shostakovich that night , but the concert really was more than just about the music-making, but the music-MAKER. The only thing which made her look out of normal was the gown she wore for the performance. But then, that’s not what you’re looking at. You’re caught by a distinct absence of “stardomness”. When she speaks to you, it’s all natural and quietly sincere. “Hi, what’s your name?” (she signs it on every autograph). “Do you play an instrument?” (“I used to play the Chinese flute”) “But no longer?” (“yeah, not since I started work, etc.”). I complimented her grace in her playing and told her to keep that with her always. “Thank you!” with a warm, sweet smile.