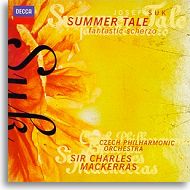 When Josef Suk joined Antonin Dvorak’s composition class at the Prague Conservatory in 1891, two things became readily apparent – first, that he was exceptionally talented, and second, that levity was not a quality he cultivated in his music. A nearly unbroken string of serious compositions in minor keys culminated in Suk’s graduation piece, a Dramatic Overture in A minor. That piece moved Dvorak to suggest that Suk “lighten up” and write something more cheerful for a change. The result, the Serenade for Strings, made Suk’s reputation, impressing Johannes Brahms favorably with its charm and lyric grace.

In the years after his graduation, Suk’s bond with Dvorak deepened and matured. In 1898, Suk married Dvorak’s daughter Otyika and completed his incidental music to the play Raduz and Mahulena by Julius Zeyer, later adapting the music into the concert suite A Fairy Tale. This suite, written in the fantastic vein of Rimsky-Korsakov but sounding much like his father-in-law’s work, contains some of Suk’s most beguiling and hauntingly beautiful music. Compositions that followed A Fairy Tale, and followed a similar path of hummable melodies and dreamy introspection, included a Fantasy for violin and orchestra and the Fantastic scherzo.

However, in the years immediately following the Fantastic scherzo, tragedy struck. Dvorak died suddenly in 1904, and to work out his grief, Suk threw himself into composition of a large-scale symphony, Asrael

, named after the Muslim angel of death. After Suk had finished the first two movements, Otyika’s equally sudden passing in 1905 further shattered his life. Suk extended the scale of the symphony to five movements in a dual homage to the closest people in his life. It was by far the most ambitious composition he had attempted, and proved a watershed in his life.

After Asrael, Suk (left) was an entirely different composer, with the pre-Asrael sunniness and tuneful allure gone for good. Orchestral works needed to measure up to the Mahlerian scale of Asrael. Even his piano works, which had previously been little more than salon works, became harmonically more astringent and economic in their musical material. Suk became known as the one Czech composer to rival the Moravian composer Leos Janacek, but he became increasingly less prolific as he pushed his works further into new directions.

Taken together, Asrael and the three large symphonic works that followed it – Summer Tale, Ripening and Epilogue – form a tetralogy through which Suk labored to come to terms with human existence and its fundamental problems, as though each work were in itself one movement of a vast symphony focused on one musico-philisophical point. Each work expanded progressively in scale as Suk’s musical thinking became increasingly complex.

Having plumbed the depths of his despair in Asrael, Suk determined not to repeat himself in Summer Tale. The tone is less desolate than much of Asrael, but undercurrents of distress still work their way to the musical surface. However, the overall mood of Summer Tale is more kaleidoscopic than in Asrael, and its musical construction correspondingly more intricate.

The first movement, “Voices of life and consolation,” begins with a faint horn call and low strings, plunging us back into the despairing world of Asrael with frightening perorations from the full orchestra. After this somber introduction, though, we are not left in the dark for long. Woodwind solos and an ascending violin line lead us into a forest world of light and color not far removed from Janacek’s music for The Cunning Little Vixen. A wide range of moods and textures follow, but far from fragmented, the music holds together remarkably well, with a number of short motifs giving the movement a complex but firm foundation.

After the broad canvas of the first movement, the next two focus on more specific images. The second movement, “Noon,” highlights a somnolent march against a shimmering pedal point in the high strings that suggests the midday sun. The third movement, an Intermezzo entitled “Blind Musicians,” follows like an unwelcome ghost from the past.

Scored for a chamber group of two harps, two English horns and reduced strings, “Blind Musicians” was first written as additional music for a revival of Raduz and Mahulena in 1907, thus echoing back to the far happier early days of Suk’s marriage and a much simpler compositional style. While it shares the exoticism of the earlier Raduz music, it plays out in a tone of remoteness and unease. A central episode for solo violin and solo viola, added when the Raduz music was used for Summer tale, is said to represent two itinerant musicians Suk had seen, who played the same pathetic tune repeatedly. This section is stylistically more in keeping with the rest of Summer Tale, and is as jarring when juxtaposed with the rest of the movement as it is effective.

We move on from one ghost to several. Swirling strings and disjointed brass fanfares faintly resembling the Raduz music plunge us squarely “In the land of phantoms,” a danse macabre of prancing demons and mocking imps. The forest music of the first movement returns, but twisted and forbidding, with a palpably malevolent air. This parade of grotesques continues until a quieter passage ends the proceedings like a shaft of moonlight cutting through the dark.

That shaft of light grows to softly illuminate the final movement, “Night,” a tranquil nocturne only occasionally punctuated by echoes from the first two movements. Nature reasserts its role as comforter and healer, with chorale-like textures slowly predominating. The work concludes with a lushly scored, affirmative coda that ends softly.

This is potent, endlessly fascinating music that deserves a wider audience, and perhaps this recording will help toward that end. Sir Charles Mackerras (right), a specialist in Czech repertoire, coaxes a commanding performance from the Czech Philharmonic. I have not yet heard the Naxos recording, but the only performance I have heard that rivals this one is Libor Pesek’s with the Royal Liverpool Philharmonic Orchestra on Virgin (545057 – no longer available).

Where Mackerras emphasizes the more modern aspects of this score, Pesek concentrates on its moody drama. Mackerras’s speeds are slightly faster than Pesek’s, but while those tempos are a slight minus in terms of atmosphere, they are a plus in holding this composition together as a cohesive whole. If Virgin re-releases the Pesek, do not hesitate to buy it – especially since EMI has been playing the game of “now you see it, now you don’t” in taking Pesek’s Suk recordings out of print almost as soon as they have been released. In the meanwhile, I would wholeheartedly recommend the Mackerras as an introduction to Suk’s later music.

There is also the added bonus of the Fantastic scherzo on Mackerras’s recording. A breezy, imaginatively scored work that Dvorak could probably have written, the scherzo is given an equally winning performance here. The only vaguely unsettling aspect of hearing it here is remembering how soon afterwards Suk’s world came crashing down on him, and how blithely unaware he was of it from the cheerfulness of the music at hand.