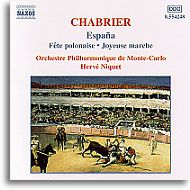 If you’re looking for an album bursting with joy and melody, then look no further. If you don’t know Chabrier, that’s not to be blamed – but whether or not you recognise the name, chances are you will recognise at least a few melodies in this collection of his famous orchestral tunes. Even if you do not recognise the melodies – listen to a few tracks, and I guarantee you won’t feel you have wasted any money on this disc.

“In the evening we are forever in the bailos flamencos, both of us surrounded by toreros in town clothes, with black felt trousers showing off sinewy legs and the shapeliest of buttocks. And the gypsies singing their malagueñas or dancing the tango, and the manzanilla which is passed from hand to hand and which everybody is obliged to drink.”

The album begins with the exuberant and colourful España, Chabrier’s most famous piece. Written to celebrate the vibrant musical rhythms and colours of Spain, it was inspired by a visit to the country in 1878. As the very fine notes by Isabelle Battioni indicate, Chabrier used the rhythms and motifs of the Spanish without actually copying the material.

Without doubt, the Orchestre Philharmonique de Monte-Carlo capture all the fun and life of the work. They play with all the colour one would expect from a Medditeranean country (Monaco), and their sense of lively rhythm as far as this music is concerned is faultless – never is there a hint of boredom or slackening in this whole album. The accomplished French conductor Hervé Niquet, better known for his series of Lully motets, shows vividly that this repertoire is also every bit his cup of tea. Every swing of tune, lilting rhythm and energetic sweep is captured with verve and spirit.

The Suite pastorale, originally for piano, comprise four pieces of – as the title suggest, idyllic pleasant music. It begins with a moderately paced Idylle, all ear candy. A energetic Danse villageoise follows, then the birdsong, wafting breezes and sunlit meadow of the Sous-bois. The Suite ends with a joyous Scherzo-valse, the performers here relishing the stomping rhythms and clarinet gigues – I assure you, it doesn’t take long for these wholesome melodies to take root in your head. 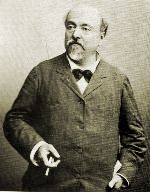 No composer interested in Spanish music forgets the distinctive sway of the habañera, and Chabrier produced a tribute to it in 189, orchestrating a short piano piece into the Habeñera here. This one is truly breathtaking in its simple beauty, and the Monte-Carlo orchestra in this performance – swaying basses, floating winds, singing strings – ah….. One thing about Chabrier is that he is not afraid to score melodic lines for the “odd” instruments, including tuba, trombones and the like – you’ll hear these around the contents of this delicious album.

Two slavic dances from Chabrier’s light opera Le roi malgré lui add to the cheer – the exuberant Danse slave makes great use of lively rhythms as well as brass and percussion. More festivity comes in the Fête polonaise, which begins with an extended orchestral fanfare-ish introduction, followed by a grand waltz (the scene is a ball).

A timely interlude in the album takes the form of the 8-minute Lamento, which Chabrier wrote around the time when his wife was suffering from deteriorating eyesight. The manuscript of this independent work was lost until recently. Hervé Niquet is quoted in the liner notes describing it as “the equivalent in sound of gradually deteriorating sight, the tones becoming thinner, the mass of sound fading away by degrees.” Like the following Prélude pastoral, these are works of powerful but well-controlled passion.

This enjoyable Naxos production ends with another famous Chabrier piece, the Joyeuse marche, a riproaring ride for orchestra with raucous horns, bubbling woodwinds – the Monte-Carlo orchestra plays with what I think is best called “orchestral laughter” – as this ends, it’s time to start the CD from the beginning again! Enjoy!

You can buy or order this CD in Singapore from Sing Discs, HMV or Borders (Wheelock Place).

Thank you for providing this to my very own attention. I truly appreciate it when individuals take time to assist others out there. This is a really great site and I anticipate visiting once again.