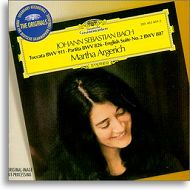 by Jon Yungkans
The heartening news that Martha Argerich made a solo recital appearance in the United States for the first time in 19 years is an excellent reason to celebrate. Always one of the more elusive and private of the great pianists, Argerich had not given a solo recital since 1983, and had spent much of the last two years undergoing treatment for melanoma, including an experimental drug program and the removal of a lung tumor. The cancer is now in remission.

When Argerich strode onto the stage at Carnegie Hall on March 25, 2000 to play a benefit recital for the John Wayne Cancer Institute in California, where she has been treated, she was greeted with as immediate and thunderous a response as Vladimir Horowitz received when he returned from his self-imposed retirement in 1965.

She soon proved the applause well-founded, showing in a program of Bach, Chopin and Prokofiev that she has lost none of her digital or interpretive prowess – that she is, in fact, better than ever. The standing ovation she received mid-concert was more than deserved. 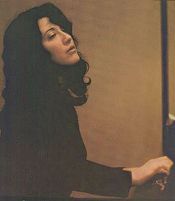 An added bonus to her fans and classical music lovers in general has been the recent spate of Argerich releases by her current record label, EMI. But among this flood of music is a most welcome reissue – and timely, since this is the 250th year ofJohann Sebastian Bach‘s death – of three of Bach’s keyboard works, the Toccata in C minor, the Second Partita and the Second English Suite, that she recorded for her former label, Deutsche Grammophon.

At this point, I need to clear the air. I have not been a Martha Argerich fan. Although I can admire her technique, her approach, especially in Romantic repertoire, has always been too agitated, her flame burning at too hot a temperature, for me to sit down and enjoy. Perhaps that is the point – you are not supposed to sit complacently, but become actively involved is what is unfolding before your ears. But I have neer been a complacent listener. Even so, I have generally not been able to listen to an Argerich recording more than once or twice before flaming out with fatigue. Until now.

Argerich’s way with Bach is entirely different than her approach to Chopin, Schumann or Rachmaninov. It is considerably more poised and simpler in approach, much more in keeping with Sviatoslav Richter orGlenn Gould than to Daniel Barenboim or Alfred Brendel. It burns with less heat but no less steady a light, and with the perfect amount of warmth for comfort.

Like Gould, Argerich avoids pedaling, emphasizing clarity, counterpoint and rhythm, though, unlike him, she does not indulge in mannerisms that could be considered eccentric. Her playing is more percussive, less legato than I generally prefer in my Bach playing, but she does not ignore the long lines that wend their way through Bach’s music.

Also, when needed, Argerich can tint passages with a number of subtle colorations. As much as I have enjoyed Ivo Pogorelich’s recording of the Second and Third English Suites through the years (DG 445573 – mid-price), there are times within a particular movement when his playing becomes monotonous equally entrancing.

The Second Partita has long been a favorite of Argerich’s, and she chose it to open her Carnegie Hall recital. Here it is more delightful than the toccata, pointing up the dance rhythms more than anyone else I had heard, even Gould, while letting light and joy into the music. This is infectious, festive music making, made with a wink and a smile, which cannot help but warm the listener’s spirits. The Second English Suite is equally enchanting.

My only complaint about both these pieces – and it is a minor one – is that Argerich plays the Capriccio of the Partita and the two Bourees of the English Suite much too fast. Taking these movements only slightly slower would allow them to burn with a more beguiling flame, and allow the embers of magic that have glowed through the rest of these suites to smolder a bit longer. But when Argerich fans the flames, you are caught up in the blaze of the moment, and do not feel left out in the cold.

Jon Yungkans hasn’t danced this much in years.