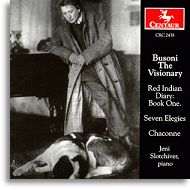 J.S.BACH Chaconne from Partita No.2 for Solo Violin in D minor, BWV 1004 (trans.Busoni)

This article first appeared at http://www.msu.edu/user/gualtie3/ and
is reproduced here courtesy of the author.

The usual line about Ferruccio Busoni (1866-1924) is that his ideas were more important than his music, yet the more of his music I hear, the more I’m inclined to question that notion. The monumental works are well known, indeed the Fantasia Contrappuntistica (1910) has spawned an entire sub-genre of all-encompassing compositions such as Kaikhosru Sorabji’s Opus Clavicembalisticum and Roland Stevenson’s Passacaglia on DSCH. Equally impressive, if less influential, is Busoni’s gigantic Piano Concerto (1904) which was recently recorded by Marc-Andr Hamelin on Hyperion. 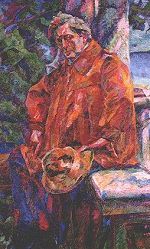 These works, important as they are, give a false impression of Busoni’s achievement. He was a skilled performer, remarkable even in an era rich in great pianists. He produced important editions of the music of Bach and Liszt. He was the teacher of such varied talents as Kurt Weill, Oscar Luening, and Edgar Varse. He was an inspiration to the composers of the Second Viennese School. He was an important theorist, his classic work, Outline of a New Aesthetic of Music (1907), remains in print to this day. His operas, Doktor Faust (1925, based on Marlowe’s play), Arlecchino and Turandot (both from 1917, the latter pre-dating Puccini by several years), still hold the stage. Yet it is as a composer of music for piano that he produced his most important work.

The pieces recorded here give a good picture of the range of his compositions for piano. The Red Indian Diary (1915) is a legacy from a visit to America in 1910. Moved by the wretched state of the North American Indians, Busoni wrote these pieces feeling that music was able to “transcend all boundaries.” Busoni’s pupil Egon Petri performed these pieces on the radio in 1959. In his hands they sound like rugged chips off the Central European block. Jeni Slotchiver’s reading emphasizes the “Americaness” of the Diary. Rhythms are more flowing and syncopated. Indeed, one of the Hopi tunes from the slow third section is made to sound quite similar to the spiritual “Deep River” with its sonorous and sustained chords.

The Seven Elegies (1907) were completed the same year as the Outline of a New Aesthetic of Music. Busoni claimed that “The Elegies signify a milestone in my development. Almost a transformation.” They form a fascinating cycle, encompassing several of Busoni’s obsessions: complex harmony, rich textures, subtle counterpoint, Lutheran chorales, Neapolitan song, and a mastery of chromaticism that never becomes pointlessly dissonant. Each Elegy is a miniature tone poem imbued with the depth of Liszt’s music at its best.

It is not Liszt, however, but Bach with whom Busoni is most closely associated. Busoni wrote numerous adaptations and transcriptions of Bach’s music, none more famous than the Chaccone. Jeni Slotchiver’s interpretation is quite different from Arturo Benedetti Michelangeli’s performance on EMI recorded in 1948. Michelangeli pulls out all the stops, bringing out all the passion and virtuosity inherent in the piece. Slotchiver is more restrained, more in keeping with the sarabande style of Bach’s original. The pulse is steady and rubato is used sparingly. The dynamics are almost as wide as in Michelangeli’s performance, but transitions from loud passages to soft are less abrupt and ultimately less jarring. 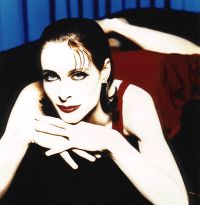 In comparing Slotchiver’s interpretation with the classic recordings of Petri and Michelangeli, one is struck by the change in performance practice since that time. Both Petri and Michelangeli sound mannered and romantic in their approach. Phrasing is more emphasized, dynamic changes are more abrupt. Slotchiver, in contrast, emphasizes forward momentum and rhythmic polish. One feels the music is being allowed to sing. This is, to some extent, a contemporary prejudice. Petri was considered Busoni’s great disciple and his playing can be assumed close to the composer’s own style. But our ears have changed since that time, and to try to ape Petri’s style would be absurd. Slotchiver (left) doesn’t do this and instead brings Busoni’s music into our own era. It is a bold and brazen choice.

This release is a revelation. Jeni Slotchiver is a pianist of the highest artistry. Fully in control of this notoriously difficult material, she has the technical equipment to let the music speak without impediment. Her plans are to record Busoni’s music in its entirety over the next ten years or so. I look forward to her next installment with relish.

The liner notes, written by Ms. Slotchiver, are comprehensive, coherent, literate and easily readably. In this one package Busoni comes alive in music and words!