Music of the Troubadours 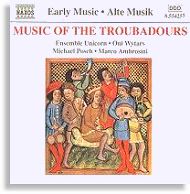 Either through reading fantasy books, or poetry, or some historical brief perhaps, we often assume that since the troubadours are a European cultural legacy, their music must sound “Western”. If you think this way, as I myself did in the past – whoa, be prepared to be surprised in a most musical way.

There are many troubadour albums in the market, much of which contain similar music as this one does, if arranged differently. That Naxos continues to engage the very fine services of these musicians is a great boon to any music collector either interested in this Early Music, or the curious/wary listener looking for a cheap path into this huge and complex genre.

As the synopsis on the back of the CD (which is a very good idea all classical CDs should carry) ably describes: “The poems and songs recorded here provide a vivid glimpse into the very speacial world of European secular song in the twelfth and thirteenth centuries. The Troubadours themselves, dedicated to the ideal of courtly love, were far removed from the wandering minstrels beloved of the nineteenth century imagination.”

The influence of the Arabic cultures is perfumed throughout the music – one will be hard put to see where any modern sense of “European”-ness is. Tant m’abelis begins the album with a fittingly festive atmosphere. The work is by the Catalan 12th century troubadour, Berenguier of Palou, who came from the present border area between France and Spain. In moderate pace, he celebrates the joy of life bathed in the love of his fair lady. This realisation, by the combined forces of the Ensemble Unicorn and Oni Wytars, is very delicious indeed, with smooth execution, catchy rhythms and light yet colourful instrumentation. The style of performance is very natural – though we can never know whether in the 12th century, it actually sounded like that, I think the readings in this disc are very fine; in the final analysis, I really enjoyed the disc.

The range of emotions portrayed are wide. Bel m’es qu’ieu chant is a melancholic love song in praise of an unnamed lady. Sung in chant-like manner, it is beautiful as it is hypnotic, with the sublty florid recorder in accompaniment. I also greatly enjoyed the wonderful spirit with which the Ensemble and Ms Lafitte perform Ai tal domna – such goregous rubato and authentic(?) atmosphere; the mood they evoke is pure sensuous music, and the phrase that comes to mind is a “bearable lightness of being”.

Another one of the most beautiful songs here is the heavenly Humils forfaitz, a slow love-song-prayer to the Virgin Queen, beseeching mercy. Ms Lafitte is at her most pleasing low soprano tone here, and matched with exquisite grace by the solo Gothic harp. An unforgettable gem.

Michael Posch, leader of Ensemble Unicorn, cannot escape the listener’s notice, with his wonderful recorder playing. In Cantaben els osells (“The birds were singing”), he shares his fluttering solo with the solo fiddle, both reveling in the vivid flourishes of the birds singing at dawn.

For me, the (medieval) bagpipe remains a very acquired taste. I must admit that I tend to avoid the bagpipe tracks. Be prepared for complaints from neighbours if you play the music too close to anyone! But given time, one cannot deny it too possesses a highly evocative sound, one which is both pungent and emotional, as in the sad cries of the instrumental estampie, Reis glorios.

Included in the album is the famous Domna, pos vos ay chausida, an anoymous work which enjoys presence in many an Early Music album. If you like fast, vibrant dances, like I do, you’ll love this rendition of Quan vei la lauzeta mover. The fast and heart-fluttering music is a lyrical translation of the powerful poetry, which depicts the envious lover who poetically compares his anxiety to the restless and energetic flight of the lark.

One of the most enjoyable things about Early Music is its lack of formal atmosphere. It’s all very fun when everyone joins in. In this album, we have a lusty rendition of Ara lausatz, lausat, lausat, a bawdy (and anonymous!) work from the Monastery of St Joan of the Abesses in Catalonia. The men join in with Ms Lafitte in shouts of celebration and fun as they sing a somewhat subtle message regarding, um, gaining profit while on your back…

The CD’s synopsis continues: “Often they were men of the highest social position – princes and lords, even kings, however limited their domains… There were others too, of lower social status – the sons of shopkeepers and tradesmen – and the rich mix of outlooks and backgrounds resulted in music and poetry of unique refinement and emotional vitality.”

One unsaid thing which is implied here is that, whether or not the cosmopolitan world of medieval Europe was so “status-liberated” as the synopsis suggests, it remains clear that one of its legacies is the art of its people; in this case, of music. Whether or not this music and poetry came from a lowly villager, or a king, they were all affected by universal forces which continue to affect us, and chose to record their visions, now well over seven centuries old, in this form. And you can actually have a taste of it for less than S$10!