N i c c o l
PAGANINI “The Devil was at his elbow!”

THE NAME “PAGANINI” is so often seen (especially at violin “prodigy” concerts) that one wonders how many classical music enthusiasts are left not aquainted with the man and his music. Born on the 27th of October 1782, Niccol Paganini revolutionised violin technique and also created the legend of the mystical Romantic violin virtuoso, equiped with practically superhuman powers of violin-playing.Paganini’s appearance on stage had a tremendous influence everywhere in Europe during the time. Two guineas was then known as the “paganinearl” as that was the ticket price to his concerts, and kings and queens showered him with a sizeable collection of jewel-encased snuff boxes. Endless rumours, slanderous remarks and poems have been written about him, making him probably one of the most controversial musicians in music history. And the reason for this universal show of histronics? His incredible, and possibly still unsurpassed, faculties on the violin.

The Gamble of the Violin
A great man is rarely ever without his quirks. Paganini indulged excessively in gambling and romantic love affairs, and even went so far as to set up the “Casino Paganini”, which unfortunately was a failure. (Perhaps he could have tried “Planet Paganini” or… hey, isn’t it about time somebody made a film on this guy?). Nevertheless Paganini eventually achieved great fame in his many concert tours around Europe and was a rich man for much of his life. Before that, at one point he was in such dire straits that he had to pawn his own violin to settle his gambling debts. A French merchant later lent him a Guarneri violin to play at a concert and after hearing him, gave the violin to him! In any case, Paganini owned, by the time of his death, eleven Stradivari, two Amati and four Guarneri, as well as a Stradivarius viola and double bass. 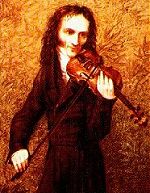 Paganinis many adventures and extraordinary indulgences apparently sparked off stories of his being in league with the devil and that he had even been imprisoned for murder. “The devil was at his elbow!” was the claim made to explain his technical prowess at the violin. Someone even swore that he saw the devil directing Paganinis arm and guiding the bow! As a result, his burial in consecrated ground was actually delayed for 5 years.

Nothing too Difficult
Europe was constantly in search of novelty at that time, and Paganini appeared at the right moment to surprise that world with his talents on the fiddle. Everywhere he went, his reputation arrived much earlier than he did, and his concerts had people flooding the hall above its capacity – the equivalent of pop artistes today. He did everything that no other violinist could do or even dream of, dazzling the crowd with left-hand pizzicati, extensive doublestopping parts and ricochet phrases. A favourite act of his, which critics frowned upon as a circus trick, was to play demanding variations on a theme using only the G string.

Fittingly enough for this master of showmanship, he started the trend of playing from memory. In 1833 he settled in Paris and commissioned Berlioz to write his Harold in Italy – but Paganini never played it supposedly because he thought the viola part was too easy! Berlioz recorded in his Memoirs Paganini’s reaction: “That’s no good. There’s not enough for me to do here. I should be playing all the time.”

Two Strings Are Better than Four
His technique demanded an extensive use of then unheard-of methods and effects. Always a flamboyant showman, Paganini possessed extraordinary powers of improvisation and would sometimes – deliberately – sever one or two strings on his violin and continue to play on the remaining strings! Although his skills are no longer considered unique or impossible, he can nevertheless be credited as the pioneer of the use of harmonics, special effects obtained by special methods of tuning, several styles of bowing as well as new ways of using staccato and pizzicato.

Inhuman Proportions
Paganini excited the curiosity of all who saw him due to his strange appearance and his technical virtuosity. He was evidently very thin and gaunt: “His bony fingers seemed to stretch from one end of the violin fingerboard to the other without effort; and it has been asserted that without such a length of finger he never could have played the passages he is known to have executed.”

Left: Photograph of Paganini in action? According to one of our commentators (see below), this is a faked photograph. Click here for more info. The Flying Inkpot is indebted to Mr Ted Gegoux for this information.

Pretty soon, newspapers gave up trying to describe his concerts which left everyone speechless. Nobody could add to the list of exhausted adjectives used to praise his performances. Violinists attend his concert to hear the man who dared to compose the impossible 24 Caprices, and who had the nerve to claim that he can play them too. Paganini was a performer who could count Schumann, Schubert, and Liszt as part of the audience, the last who was so inspired by him that he went on to become the Paganini for the piano. In short, he single-handedly inspired the virtuosic movement and left a great legacy to music history.

From 1834, Paganini made few appearances in public and died in Nice on May 27th 1840, of cancer of the larynx – and was reputed to have been buried alive! All this, whether true or not, added on to the already legendary name of Niccol Paganini – the Devils Violinist.

Ong Yong Hui plays the violin. Chia Han-Leon does not play the violin.