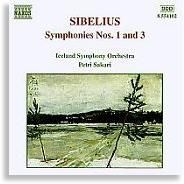 True to his name, the Inkpot Sibelius Nutcase is still not sick of the First Symphony.