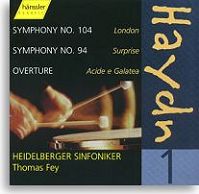 Can this be? On the cover of this disc is printed a number “1” two centimetres tall. But it is – this is Volume numero uno of Hänssler’s Complete Haydn Edition, a series to be issued in loose sequence. The label, the notes explain, is aiming for 2009, the 200th anniversary of the composer’s passing.

For the series, Hänssler has procured the services of Thomas Fey, director of the Heidelberg Symphony Orchestra and the Schlierbacher Chamber Orchestra, and former student of Nikolaus Harnoncourt. With the latter in mind, it is not surprising to learn that the orchestra will play in “historical” style, but with modern strings and woodwind. Like Harnoncourt’s award-winning Beethoven cycle on Teldec, the Heidelberg Symphony will use period brass instruments (much to my approval) and calfskin for the timpani top.

Thomas Fey writes that his “goal is to convey to today’s listener’s not only the beauty but also the boldness of Haydn’s music.” If the performances are anything to go by, Fey has scored an immediate victory – and I am now fully intent on collecting this series (I hear a few of you laughing in derison). The reading of the 104th Symphony (1795) which begins this album is bold and energetically driven. Although most of the instruments are modern, the resulting sound Fey has created is more “period” than I expected. What I mean is that you’re not going to hear an orchestra which sounds like a double chocolate milkshake.

The articulation of the players and their massed instruments is sharply edged, sharply accented, each phrase carefully but vibrantly etched – just listen to those lightning whizzing strings in the finale. The balance, care and commitment is such that the readings display the Classical harmony-scape – that distinctly defined palette of solid, polished clours – with ample and pleasing transparency.

For me, a stickler for historical authenticity and conviction of sound and interpretation, Fey’s readings instantly convey a very satisfying solution. The brass are suitably brash and forward, but can also be soft and round, as the horns demo in the middle two movements. In terms of interpretation, Fey’s picture of the work is one of superb craftsmanship, tip-top clarity and noble, let’s-do-it! drama. His handling of the flow, the ups and dows of Haydn’s propulsive forces, the interruptions to the quiet sections of the 104th’s middle movements – are simply outstanding. The producers have even timed the pauses between each movement to perfection – really, just listen to the symphony and you’ll see.

I first encountered Symphony No.94, the “Surprise Symphony” when I was 14 or 15 – I bought the tape for the simple reason that I was curious to find out what the “surprise” was. Unfortunately, for us 20th century people, Haydn’s surprise was by now nothing special. I remember rewinding the tape back and playing the symphony again and again in frustration, wondering where the heck the “surprise” was. The tape had no notes to illuminate me, so when I later discovered through reading where the “surprise” was, it was of course no longer one.

I must confess though that it’s been years since I’ve heard the “Surprise Symphony”, and my memory of the work was more than a little vague. Good for me, for now, some dozen years after first being not-surprised by the work – I got a jolt from this performance!

This 94th, written in 1791, sparkles with life; the little waltzes of the first and third movements are infectiously danced, with lively orchestral swayings and chirpingly fresh woodwind. Such bright tone from the Heidelberg strings, from the rich basses up to the shining violins. Fey’s range of dynamic in the Andante is wide but carefully controlled for maximum balance and musical effect. Interpretation-wise, it is fun, smile-inducing and, whether the tempo is fast or slow, full of life, greatly and immediately enjoyable. Tutti passages are powerful but transparent, with some really exciting forte passages. 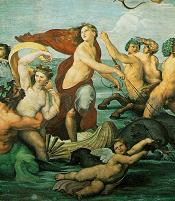 The Overture to Acis and Galatea is an early work from around 1762. A miniature symphony in three movements – a legacy of the Baroque sinfonia – it is overflowing with energy in the best of Haydn’s tradition. Armed with a chinkling harpsichord at the bottom of the score, the 6-minute work has both the transparent beauty of Classical music and the flavour and energy of the Baroque. The lilting Andante grazioso is a perfect example. The outer fast movements show the Heidelberg orchestra in unrelenting forward momentum, bursting with vitality.

Fey admits that “[a]fter intense theoretical and practical grappling with the symphonic works of Mozart and Beethoven, [he] admittedly discovered [his] love for Haydn’s music only a few years ago.” He adds in self-skepticism, “Had I really been of the opinion that Haydn, was less of a symphonist than both of his Viennese contemporaries…?”

My experience is not dissimilar. For some time, I had held opinions of Haydn similar to Stravinsky’s own rather unwise thoughts on Vivaldi(‘s “1 x 400” concertos). But make no mistake, my fellow music enthusiasts – Franz Josef Haydn is the Father of the Symphony.

I myself won’t explain oww. Thomas Fey adds that this ambitious recording project “offers a chance to relive first hand the development of the classical symphony.” To this I clap my hands with total approval and support, and to Fey’s performances – all electric 59 minutes here – I bow in respect then cheer with glee. Next volume please!

As a curious teenager, Chia Han-Leon was also attracted to the names “Drumroll”, “Military”, “Haffner”, “Posthorn” and “Buck Rogers”.