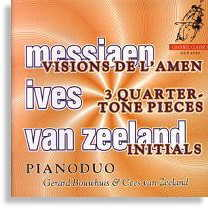 Olivier Messiaen (1908-1992) is considered one of the greatest composers for his clearly defined and unique character: inspired by nature and Catholic ideology. His music is known for its melodic invention – ranging from the liveliness of ecstatic dance to the serene austerity of plainsong – and for its rhythms marked with the freedom of Indian classical music; above all, for its unchartered terrain of unusual and beautiful harmonies.

Throughout his lifetime, Messiaen carried out the roles of performer (as parish-organist), teacher and composer with Christ-like dedication; and the fruits of his labour are duly apparent: the enlargement of the organ’s repertoire in contemporary composition, an army of renowned students who have included Pierre Boulez, Karlheinz Stockhausen and Alexander Goehr; and a portfolio of some of the greatest music ever written.

Within this extensive catalogue are a number of highly original works for the piano which have become permanent cornerstones of late twentieth-century virtuoso repertory: Vingt regards sur l’Enfant-Jsus and Catalogue d’oiseaux come immediately to mind. But Messiaen’s singular contribution to the repertoire of the piano-duo must be counted amongst the most valuable of all time: gone are the leisure-traits which have characterised much of the nineteenth-century’s developments in four-hand (or more) writing – Visions de L’Amen is a tour de force exercise in musical architecture, sonority and rhythmic complexity.

Inspired by a work of theology, Visions serves to justify Messiaen’s conviction of the four-fold definition of ‘Amen’: the act of creation, the ‘Amen’ of acceptance, desire, and the ‘Amen’ afforded by Paradise’s fulfilment. To these he has added “the lives of creatures that say Amen through the simple fact that they exist”.

Conceived as a virtuoso vehicle for Messiaen and his brilliant young pupil, Yvonne Loriod (whom he would later marry), the music exploits very different temperaments and techniques by assigning entirely separate roles to the two pianos: the first part – given to Loriod – has all the technical ravages, the bells, birdsongs and decorative figuration; while the second (Messiaen’s own part) carries the themes and underlying harmonies.

Visions is a compound of seven movements: a work of unity that may be perceived as two symmetrical halves (of three movements) sandwiching a central section. The opening movement (Amen de la Cration) introduces the “theme of Creation” amidst a double-layered rhythmic ostinato in a gigantic wave of crescendo; the subsequent movement (Amen des toiles, de la plante l’anneau) displays three different developments of a five-note motif in a kaleidoscopic swirl of pianistic colour.

Movement three (Amen de l’Agonie de Jsus) introduces a genuine interplay of pianism in a passage of sonorous heterophony; whereby three ‘weeping’ motifs serve to represent the agony of Jesus on the Mount of Olives. The central ‘Amen’ (Amen du Dsir) begins in ineffable calm and brings the tension to mount in an impressive display of jazzy improvisation and big-boned virtuosity for the second pianist.

The fifth movement (Amen des Anges, des Saints, de chant de oiseaux) calls upon the “theme of Creation” in a more fluid – almost improvisatory – incarnation; bordering a central section of ‘birdsong’ (a typical feature of Messiaen’s music) in which strains of nightingales, blackbirds, chaffinches and whitethroats have been meticulously transcribed.

Amen du Judgement is a brief exposition of three icy notes; in nature, a grim mirror-reflection of the third movement’s solemnity. The final Amen de la Consommation transforms the “theme of Creation” into a triumphant chorale amidst a carillon of chords and brilliant scintillating rhythms. With Visions, the first fruits of partnership between Messiaen and Loriod were sown; and thus begun the composer’s association with the piano in most of his large-scale works.

Towards the end of the 19th century, it was discovered that the interval of a semi-tone on a tempered hierarchy of twelve, pre-ordained ones could be further broken-down into even smaller intervals (easily obtainable on string instruments) – thus leading to the discovery of “Microtones”, a collective term which includes the phenomenon known as “Quarter-tones” (i.e; half the interval of a semitone).Bartók made generous use of quarter-tones and other microtone intervals (borrowed from gypsy and Balkan cultures) in his scores; and Czech composer Alois Hba even invented an array of new instruments to produce fragmented tones. Curiously, it was Charles Ives (1874-1954) – American insurance-broker and experimental composer – who learnt of it when his father, a former bandleader in the American Civil War, built himself a piano to explore quirky sonorities.

In 1923, Ives composed three miniatures for a quarter-toned piano. The Largo first movement employs quarter-tones only as non-harmonic tones (passing-notes, suspensions, etc.) within a diatonic framework; the following Allegro movement is an interplay of rhythms la Stravinsky for two pianos – one tuned a quarter-toned sharp. The final Chorale movement was carefully constructed to give full-rein to manifold quarter-toned possibilities in both pianos: it simply takes as its harmonic basis a primary and a secondary chord, and each instrument works through a myriad of splintered-tones in various chordal formations. An intriguing experiment in musical composition, this one!

Dutch pianist/composer Cees van Zeeland (b.1954) – one of the artists featured in this recording – has done well to ally himself with the French ‘school’: Initials, written in 1989, is full of references to post-1945 dogma perpetuated by Boulez and the Messiaenists. Lucidly segmented into sections each designated with characteristic motivic patterns, the work attempts to eventually amalgamate all material which at first seemed rich in contrast.

From a calm, sustained opening, the music suddenly explodes in furious, ascending four-note figures and blistering chord-groups. Following this, a section underlined with jazz-like rhythms is interspersed with Boulezian note-splinters. Patterns from the preceding segment return to mingle; before the music subsides again into tranquility – a quasi-aria passage.

Soon gaining in momentum, the peace is disturbed with sharp, staccato-chords of variegated combinations. Then, familiar motives are once again recalled and juxtaposed with more recent conjurings; before all proceedings slide for the last time into stillness. The work closes with a recapitulation of the introduction; culminating in a straightforward exercise of intelligence and coherence, though largely forgettable. 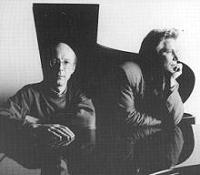 The pianists in this recording – Gerard Bouwhuis and Cees van Zeeland, both renowned in the Netherlands as accomplished contemporary-music practitioners – have taken great pains to perform the challenging music on this recording with expert clarity and dexterity.

Their performances are nothing short of awe-inspiring and exemplary: beginning with Messiaen’s massive affirmation of faith, both Bouwhuis and Van Zeeland are revealed to possess a rock-solid conception of the work’s structure and significance; successfully conveying the “growth” of Messiaen’s brainchild from primordial silence to ecstatic bravura.

The first movement is infused with a sense of abysmal mystery; as the players craft carefully and diligently the all-encompassing crescendo with unflinching momentum. A wild, almost savage dance erupts in the second movement – full of panache in Pianoduo’s vision: savour their clarity as they trudge through the thickets of polymodal turbulence.

Then, listen to how gently they sculpt the agony of Jesus’ lament; before lashing out in high-spirited, jazzy brilliance in Amen des Anges, des Saints, de chant de oiseaux : here given a colourfully vivid evocation of ‘song’ and ‘soul’. A sense of foreboding shades the opening of the next movement, culminating after every turn in crashing chords of thunderous might.

Pianoduo’s confidence reaches its peak in the exciting conclusion: be amazed at how stylishly they “pass” the proceedings from one to another – culminating in a display of fantastic duo-pianism second to none – and partaking in a flourish of “finger-fireworks” that lead the music to a rousing finish.

The same clarity of purpose characterises the rest of the program: Ives’ quarter-toned puzzles are intoned meticulously – it is not difficult to detect Pianoduo’s firm belief in this music’s artistic significance. Every detail is elucidated clearly and not without character: I particularly relish the humour in the Allegro movement – full of piquant flair and lan. And in Initials, the players waste no time in convincing the listener of their amazing familiarity with contemporary music – its myriad forms, structures and styles – and their dedication to performances of crystal-clear definition.

With such impeccable teams as that of Gerard Bouwhuis and Cees van Zeeland in existence, the future of duo-piano music is very bright indeed.