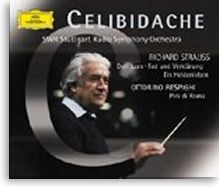 The continuing cycle in Deutsche Grammophon’s Stuttgart recordings under Celibidache offers some of the most compelling music making I have ever heard on disc. It also offers at least one performance that is as infuriating as it is great. But that is the spell that Celibidache, almost alone amongst the great conductors, seems capable of weaving. Unlike the two previous issues, of Brahms symphonies and Russian showpieces, this set offers evidence of Daniel Barenboim’s description of Celibidache as “part magician and part gypsy” in ample measure.

Celibidache’s attitude to Strauss’ tone poems seems to have been as idiosyncratic as that of Furtwängler. Both conductors had rather negative views of the large orchestral works (Ein Heldenleben and Also Sprach Zarathustra) and rarely programmed them, although the shorter (but by no means less grand) works appear often in both their concert registers and recording archives. This Ein Heldenleben is, therefore, an important aural document of Celibidache’s approach to this work, not least because it is his only known performance to exist on tape (a Munich one has never been available).

It is an infuriating performance because it elicits real greatness with many details of the score you simply do not hear in any other performance. Such transparency in Strauss is rare and is only really accomplished because of the very slow tempi. Celibidache is almost a full ten minutes longer than Fritz Reiner on his famous Chicago Symphony Orchestra recording (1954, RCA 09026 61494-2) and the only other recording to approach Celibidache’s 50+ minutes is Barbirolli’s LSO account on EMI (CZS5 69349-2).

The Celibidache performance shares a great deal with Barbirolli’s version: a sumptuous sound from the orchestra highlights the opulence of Strauss’ writing, there is greater tension and electricity in the battle scene, and the acerbic wind writing is more keenly articulated. Few wives appear as nagging as Celibidache’s. It remains, however, more a tome poem in Celibidache’s hands with the drama unfolding like the pages of a novel.

The performance of Tod und Verklrung is a different matter all together. Indeed, it is the greatest version to appear on disc in the stereo era, and rivals versions by Victor de Sabata and Dmitri Mitropoulos (in a ‘live’ New York performance given days after the death of Guido Cantelli – and badly needing a mainstream reissue).

This is a performance that crosses the emotional extremes, the tenebrous opening absolutely dark, the colour Celibidache gets from his strings graphically elevating above the norm, the sense of an ill man suffering. The violent shift to the man’s agonies are dramatically handled by Celibidache, and only in the Mitropoulos version is the delirium and possession of these intense pages so vividly defined.

Violins in this performance really sweep, the soaring passion of the love scene furiously, and palpably, played. One can almost feel the hammer blows in this Celibidache performance, such is the immediacy of the moment, and the death of the invalid is presented as a gesture of pure catharticism. It is a memorable performance of one of Strauss’ most noble and beautiful works.

Don Juan requires a playing time of about 17 minutes. Comparing Reiner’s Chicago performance at 16 minutes (on RCA 09026 68170-2) and Celibidache’s Stuttgart reading at 18 minutes – there is actually very little to separate them in terms of the excitement generated by these two different performances. Both open impetuously with both orchestras playing with stunning virtuosity. But there the similarities end. Reiner is more objective, far less romantically inclined than Celibidache whose interpretation is masked in an intoxicating lightness of touch and delicacy.

The perverse coupling for this disc is Respighi’s Pini di Roma. Oddly, there have been numerous earlier performances by Celibidache of this piece, and it found favour with conductors as wide-ranging in their tastes as De Sabata, Reiner and Toscanini. Fine as all of these performances are, the music still sounds hackneyed and in the wrong hands can lead to the most jaundiced of listening experiences.

Celibidache’s performance is suitably evocative and, at times, warm-blooded and sultry. Textures are often ravishing but if anything, and where the piece calls for drama, in the final approach to the Appian Way, Celibidache’s conducting seems very understated. The recording doesn’t help (it appears rather recessed), and Celibidache simply doesn’t build up the momentum in the way Toscanini does in his famous recording of the piece (RCA GD 60262). A rather tame experience, and a disappointing end to this set.

But the Strauss performances are invaluable. All come near to those by Furtwängler, both in terms of elasticity of tempi and in depth of emotion. There is something inherently trustworthy about these performances that seems to unite the polar Strauss worlds of lightness of touch and a sense of the frivolous. In all the pieces the orchestra plays in an authentically middle-European manner, with strings given superb depth and definition. My only regret is that Deutsche Grammophon could not find room for Celibidache’s 1965 Till Eulenspiegel.

Marc Bridle‘s shrine to Celibidache can be visited by appointment only.