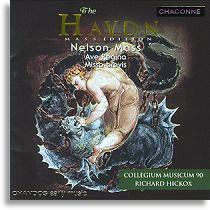 Includes libretto in Latin with translations in English, French and German.

Besides Purcell, Handel, and the rest of the English (or slightly Hanoverian men), I have greatly enjoyed British renditions of Haydn – perhaps it has something to do with their cosmopolitan disposition, something neither too heavy nor too fiery, something genial and honest to goodness.

The combination of Richard Hickox and his team of fine performers with Haydn’s late masses is, based on their reputation from other choral albums, downright irresistible. This can be immediately sampled on this album’s first track – the majestic D minor Kyrie of the “Nelson Mass” – weighty trumpets over timpani, strings sharply voiced and cutting, then skittering glitter in running passages. And the glory of Hickox’s vocal soloists – if this track impresses you – well, it only gets better!

Through the beautifully articulate and above all sunny bright voices of the Collegium Musicum 90, the results are simply astonishing in their musical purity and vitality. They truly speak – sing – for themselves.

The Haydn Mass Edition on Chandos Chaconne is one of the best series of recordings the label has produced. To be precise, the series only involves the late masses of this ‘genial’ Austrian composer, all written to celebrate the nameday (effectively birthday) of the Esterhzy’s Princess Marie Hermenegild. (Apparently, there are plans to go on to record the earlier masses).

This fifth (of six) instalment presents the justifiably popular “Nelson Mass“, quickly written in 53 days, in September 1798. The year was a particularly hectic one for Haydn, who was then 66. He had recently completed a two-year project – The Creation (which I hope Hickox will record with Chaconne), for which had also to spend the first five months of 1798 preparing the score for performances. At mid-year, the weary Haydn was aware of his requirement for the Princess’ nameday celebrations, but probably due to his exhaustion did not begin work on the mass until 10 July. It was completed at the end of August and premiered on 23 September.

Later, the Mass was also performed before Horatio Nelson when the great Admiral visited Eisenstadt, hence the popular nickname. The heroic and jubilant nature of the music caused later commentators to make references to Nelson’s victory over Napoleon at the Battle of Aboukir, also in 1798. This relationship is, of course, an anachronism, since Haydn only learnt of the victory after he had completed the Mass.

But no matter, witness the happy jubilation of the Gloria on this CD – such a wonderful way Haydn weaves solo voices into the choral textures, supported by his brilliant orchestral writing. Soprano Susan Gritton – currently queen of the British (Baroque) sopranos – leads the vocalists which include the very best in the business: experienced and clear-voiced Stephen Varcoe, pleasant and naturally in-control Pamela Helen Stephen, secure and smooth Mark Padmore. It is amazing how quickly vibrato has returned to the HIP scene, here beautifully balanced with the straight vocalisations of the choir and the orchestral strings – the result places each in its place, supporting and complementing each other to wonderful effect. There is no single track I can do justice to – every chorus, every quartet, trio, duet, orchestral tutti, every note in the Mass is melodiously beautiful music of the most highest Haydnesque tradition, and superbly performed here by Hickox’s forces – simply marvellous.

Later, Haydn registered the new Mass in his catalogue as a “Mass in straitened times” (Missa in angustiis), but this was also not its formal title. Other than the reference to his limited time he had to work with, the “straitened” conditions may have also referred to the fact that courtly budget cuts had caused the dismissal of the wind section of the court orchestra. Haydn was left with the strings and organ, to which he was able to supplement with timpani and three hired trumpeteers.

But look at the results! The very Baroque textures would have left Bach himself breathless, as the choir, strings, trumpets and drums of the Collegium Musicum 90 roll triumphantly for Gloria, the Et resurrexit, up to the sunnily dancy and joyous Dona nobis pacem.

Coupled with the “Nelson Mass” is the Ave Regina in A major, believed to be a work from Haydn’s early life. Ms Gritton takes up the melodious solo with delightful conviction, bravely injecting bright tone, brightening as it rises, warbling trill and lovely vibrato into the Italianate swoops and curves of this otherwise sweetly Mozartian work.

Unlike Mozart, Haydn lived to the ripe old age of 77. In these late years, his publisher Breitkopf & Hrtel continually asked him for sacred music, for which on at least one occasion he simply recovered some of his earlier works, made a few modifications and sold it to Breitkopf. The 12-minute Missa brevis in F major is believed to be Haydn’s first mass, written when he was around 18. The aged composer apparently remarked wistfully about its “certain youthful fire” – what one would hear mostly is the quick choral takes in each of the short movements, alternating with deliciously sculpted duet-writing for the two sopranos.