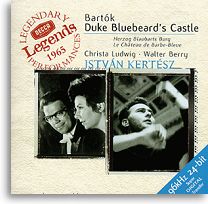 Notes in French, German and English.
Full libretto in Hungarian with translation to English only.

I have been wanting to get a version of Bluebeard’s Castle since the SSO performed it several years ago in original Hungarian (not the latest performance in English). I was amazed at how accessible this opera is, despite me not knowing a single word of Hungarian. This music doesn’t grow on you, it affects you instantly!

The recent acclaimed readings by Haitink and Boulez are understandably at full price and this reissue with Hungarian interpreter Kertsz at the helm could not have come at a more welcomed time! The performance merits here are undoubtable – the London Symphony Orchestra is at the peak of its roller coaster ‘career’, if I may use that word to describe the fate of the unfortunate orchestra. Further, Kertsz, who was much over shadowed by Solti in Decca and later made his fame with his impeccable Dvork symphonic cycle, did in fact leave behind many other fine interpretations of modern works from his native Hungary, one of which was this unbeatable recording of Bartók’s only opera.

Bluebeard’s Castle was once described by Kodly as a “musical volcano erupting for sixty minutes of tragic intensity” and true enough, there are musical impresarios here to deliver that needed impact. Kertsz leads the LSO thrillingly, capturing vivid drama and intensity to drive home this heavy weight of an operatic experience. The remastering boasting 96kHz-24 bit Super Digital Transfer is excellent. It is justifiably warm and spacious. There is little to compain of with the exception that Walter Berry’s voice was at some parts given too large a reverberation than is convincing. There are also minor cut-and-paste flaws that is occasionally disturbing to the astute ear. Nonetheless, the merits in this reissue exceed the flaws and the improved sound makes for an intense 60 minutes into the terrifying yet pathetic psyche of Bluebeard. Kertsz’s perfectionist meandering of soulful pain and angry flounderings is brought out in full sonic vigor, enough to make me hit the panic button! 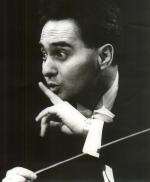 The outline of this dramatic story has been very well detailed here. Kertsz (right) says: “the point is that all the blood is Bluebeard’s [his] blood, it means his suffering.” True enough, everything happens in the imagination and the husband and wife coupling of Christa Ludwig and Walter Berry as Judith and Duke Bluebeard are in dramatic terms, la divina par excellence! They capture the turns and twists of this boiling tragedy and propels my imagination, darkness and all, with their superb vocal subtleties. Kertsz achieves the ‘sighs’ which Bartók requests in the score with a sort of mixture between the ‘sound of weeping women and the wind of the night’. This effect is heightened by the current remastering and the monophonic panning sort of isolates the listener into further engagement with his own soul…the Bluebeard inside all of us.

It is impossible to imagine any other dramatic coupling more successful than this current pair. Their voices and vocal technique are first rate. Ludwig’s glorious mezzo has been one dramatic voice that I have loved since I first heard her in a recording of Wagner’s Ring. This recording beats all that! She is alot more insightful here, personable and contextually more appealing. I shuddered and moved with her at her pained cries and tender outpouring at the opening of each successive door. Walter Berry’s large bass voice is a dwindling rarity, full of forward warmth and never too dark for my liking. It is extremely absorbing to hear the two of them not just for sheer compatibility of the timbre of their two voices, but for their dramtic engagement of each other and the matching LSO. Hear the orchestra swell together with them. The effect is enormous! Such a monstrosity of sound!

In Singapore, EMI discs are available at or can be ordered from Sing Discs (Raffles City), Tower Records (Pacific Plaza and Suntec City), HMV (The Heeren) and Borders (Wheelock Place).

Ng Yeuk Fan‘s been at it again, not bluebeards, but blue muffins for tea, anyone?