An Inktroduction by Chua Guan Ee

Béla Bartók’s opera, written in 1911 a youthful work of immense promise and assurance is perhaps the one Debussy did not write. It was Bartók’s singular foray into the genre: on hearing it, one would certainly wish he had left us a more fulfilling legacy. Bluebeard’s Castle is an exercise in symbolist drama; and Bartók’s score aptly serves its purpose it is here that we may experience the composer at his most sensual, as he strives bar-after-bar at creating atmosphere to Bla Balzs’ superb text; pointing the way to the Bartók of The Miraculous Mandarin (1919) – even the much later Concerto for Orchestra and yet wholly different. Here the composer’s sole preoccupation with textures and timbral effects far outweigh his later experiments; a world apart from the more angular and idiomatic Bartók we are more familiar with. Here, listeners will be able to recall sporadic influences of Debussy whom Bartók greatly admired especially in the orchestral writing; and glimpses of Richard Strauss in the work’s operatic treatment. 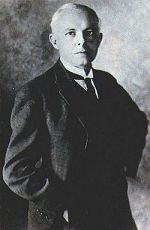 The legend of Bluebeard was thought to have been based on the 17th-century figure of Gilles de Rais, dubbed the “wickedest man in the world”, who at the time of his death had murdered, by way of ritual sacrifice, 800 children. The folklore which forms the basis of Balzs’ operatic adaptation offers a chilling portrayal of the wife-killer as the embodiment of pure evil: as this CD booklet-notes aptly describes, ” [Bluebeard’s Castle] has the archetypal quality of something that is part fairy-story, part Freudian case-study. The confrontation between a passionate yet ultimately submissive woman and a charismatic, sinister man is the stuff of high drama, and Bartók (right), prompted by Balzs’ text, presents that drama as the enactment of a single catastrophic event “. Balzs’ model for his symbolist ethos was none other than Maeterlinck; and Bluebeard seeks in some ways to mimic the latent qualities in the latter’s Pellas et Mlisande.

The Music. The music is ringed round a symmetrical sequence of tonal regions, and always ends where it had begun. Various motivic features, especially that associated with the recurrent image of blood, are deployed to lend the score a suitably post-Wagnerian coherence and continuity. As in the German composer’s music dramas, Bartók’s Bluebeard does not have the characters singing arias at each other.

Melodic formulae are, nevertheless, inventive and the composer obliges with memorable lyric ariosos. Here, as in his other works, the elements of folk-music are transmuted into richly patterned, sophisticated art music; and simple, modal outlines are made to serve various interesting purposes to underline the action on stage. As each of the seven doors is opened, the music offers vivid pictures in sound; and even more so, conveys the emotion and shifts of mood often extreme of the two characters.

The Tale. Duke Bluebeard is an eccentric figure who dwells alone in a stony, Gothic castle; totally devoid of windows and even the tiniest glimpse of sunlight. The air within his spooky domain is deathly stale, bearing unmistakably the stench of blood. A vast circular hall empty, dark, as if hewn out of rock – is flanked on both sides by stairways: the one on the left is the entrance into the castle; and the one on the right leads upwards to seven enormous doors.

Bluebeard enters with his new bride, Judith, and immediately she begins to take in her gloomy surroundings. Bluebeard questions her continually if she is afraid, but she brushes the queries aside and the rumours she had heard about her sinister groom and chirps confidently that she will bring “warmth, brightness and love” to the castle. However, the man maintains obstinately that “nought can glitter in my castle”. At this, Judith commends herself to him submissively. But as soon as she becomes aware of the seven huge doors above them she demands to know what lies behind each of them. Bluebeard warns her of her request, calling to mind the gossip which runs amok of his evil-doings she had surely heard. Judith stubbornly refuses to give in, and insists that her love for him allows her every right to unlock the doors. Bluebeard’s eventual acquiescence spells eternal damnation for the woman. 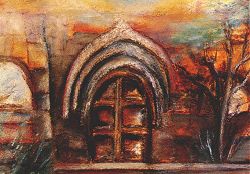 Left: Detail from a stage design for Bluebeard’s Castle, created by Wilhelm Matenaar for a 1984 production in Berlin.

The first door opens to reveal the castle’s torture chamber shackles, daggers, racks, pincers and branding irons; and beyond this hideous artillery, stone walls coated and dripping with blood. Behind the second door she discovers his armoury – Bluebeard’s collection of murder-weapons, all unsuspectingly stained with blood. Door number three opens on the castle’s treasury the man’s luxurious vault of fortune amassed over many lifetimes. Blood is ever-present, even here, amidst the gold and glitter.

The fourth door hides behind it a secret garden; its various shades of green paling in comparison to the odious crimson of blood spattered all over. The fifth door opens to a grand vista of land over the hills and further, far beyond the castle’s exteriors; the endless domain which is no one else’s but Bluebeard. A blood-stained cloud hovers ominously above, and blocks out every ray of light. Behind the sixth door, a lake of tears greets silently its astounded visitor: its stagnant pool giving no clue as to its unfathomable depths of despair.

The final door opens to Judith a fatal revelation: the decapitated bodies of Bluebeard’s three previous wives, each representing morning, noon and night; and Judith, alas, must join them

Behind his seventh door, Chua Guan Ee hides his ghastly collection of mutilated musicians… The Inkpot reviewers often go there to dispose of unwanted friends, or just for kicks.