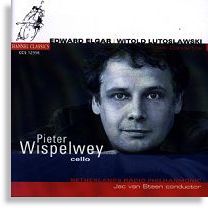 The man’s sincerity, humility and wisdom, put across by his writing, are but additional qualities we can admire next to his virtuosity and masterful musicianship. An expert on stylistics and a master of both authentic and modern instruments, Wispelwey is no mere personality when he approaches a piece of music. He has left more than “traces” of originality in his take of this immortal concerto, giving us a refreshing alternative to du Pré’s legendary recording.

While I’d still heartily recommend the du Pré/Barbirolli on EMI (CDC 5 55527-2) to anyone who wants a good stereo recording, I’d persuade all the rest of us who already have that to get a copy of this one.

Du Pré’s and Babrirolli’s unbridled emotions and perfect dramatic timing erupt into torrents of feelings – one moment in the history of music recording that will never be forgotten. Wispelwey and van Steen is equally relentless. Though certainly not matching up to the energy of the former recording, it achieves that collapse of inner restraint that brings tears to one’s eyes.

The playful scherzo that follows this tragic movement blends the virtuosity and cheekiness, reminiscent of Yo-Yo Ma’s delightful account with Previn (Sony SMK53333). The third movement Adagio is sublime in du Pré’s hands. Wispelwey takes it faster, losing some of the atmosphere of contemplation, coming across in a kind of yearning. Here his tone is ravishing with just the right amount of vibrato. This movement becomes all the more captivating thus; for me it became so beautiful that I did not want it to pass quite so quickly.

Adrian Tan will be away in hiding from De Pre fanatics for writing an article about another version of the Elgar Cello Concerto.