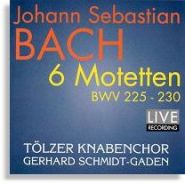 This recording is available for purchase exclusively from Tölzer Knabenchor at:

History. The story goes that around 1989 I first heard the Tölz Boys Choir singing these choral masterpieces in a cassette recording dating back to the 1960s. I was amazed by the treble voice but could not quite pinpoint what with. Then in 1997, I chanced on a recording of the Six Motets by another treble choir, the Kammerchor der Augsburger Domsingknaben (reviewed here).

That incident led me to start a “world-wide” search to find a Tlz Boys Choir recording of J.S. Bachs Six Motets for my private CD collection. Philips Classics – which I had thought owned the original copyright to that first recording I heard, apparently knew nothing of that mysterious production. My attempts to contact the Tlz Boys Choir through letters were not successful for one reason or another. Nonetheless, my search for a version of the motets sung by a treble choir led me to discover many other good performances of these motets and inadvertently spun a series of reviews for the Inkpot.

I had almost given up until a friend in Germany then told me that the Tlz Boys Choir had published a new recording of the motets by themselves. I set about immediately to search for it and when I received this CD in my mail, I was so happy that my search had finally come to a fruitful end. It is with great joy and excitement that I introduce to you this recording.
Review  This recording with certainty sets the boys apart from the men in choral singing. Well, literally, and not quite literally. Let me explain.
Treble choirs by definition comprise young voices taking the higher parts, usually the soprano and alto parts. These can be boys or girls. The usual (traditional) and my preferred treble voice is the boys voice for its many natural wonders – an internal deep, dark, mysterious chest sound balanced by a bright and clear head tone that borders on sparkling. This is a result of the unique shape and size of the boys body versus head ratio. This is then combined with an untamed buccal edge in the boys tone which is the result of the boys shallow mouth cavity. The entire tonal qualitiy is very rarified and nothing short of sheer delight! I have more than once described the special boys treble sound as a certain fearless-precarious sonic experience that quite simply defies explanation. One must experience the Tlz boy sopranos solo singing to further understand my undefinable enchantment with the boys voice – words simply fail!
I am swayed to believe that the Tlz sound achieves the most lovely balance of these aforementioned qualities. The placement of their soprano and alto resonances heard in this CD demostrates a perfect understanding of the unique advantages of the boys transient instrument. In my opinion, the subtle balance I hear here is simply lacking in the average American or British Boy Choir. In fact, few of the worlds best treble choirs can even come close to the phenomenal tone of the Tlz. Founder and music director Gerhard Schmidt-Gaden has conducted the boys since 1956 and surely has much to be proud about!
There are many sections in the Six Motets which employ small ensemble singing and here the individual solo voices can be heard distinctly in their full glory. Watch out for the characteristics that I have described above – they are everywhere! In particular, the chosen alto soloist has such a remarkable resonance and focus that would put many singers twice his age to shame.
Other important issues which are frequently taken for granted include the difficulty in sustaining long lines given the limited lung capacity of the young voice; the training of the untamed boys voice to achieve blend, enacting choral discipline in a bunch of naughty, hyperactive pre-pubertal boys etc.. all terribly close to “mission impossible”. This added with the demands which composers such as Bach puts on the voice, renders any recording of the Six Motets by a lesser boy choir close to a hopeless project. As if these facts are not daunting enough, this is a ‘live’ recording!! The odds are just formidable – which brings me to my point – that this recording sets apart the men and the boys in treble singing.
On boys and men literally, choral forces are well-balanced throughout between the boys and men (tenors and basses) and though Schmidt-Gaden does not employ any audible spatial division into double choir arrangemnent for the double choral motets, the alternative echoing play of lines remains vey much alive due to the charismatic attack which the boys give to their lines. The Tlz men have refined voices and are an excellent match and basis for balancing the vocal brillance of the boys.
Occasional intonation problems are heard with trebles, being the main source of flatness. However, this is well within acceptable limits for a ‘live’ performance of such demanding music by any standards, Nonetheless,one is more drawn to the wondrous thickness of sound – a grainy-fine blend that capitualises on the nature of the untamed treble sound.
Schmidt-Gaden lends an amazing wealth of knowledge to this music with his brow-lifting insightful phrasing of complex vocal lines and further in his impeccable control of tempi to bring out the innate pulse of the motets. There is no sweet refinement here as was heard in Herreweghes impeccable and close-to-faultless version on Harmonia Mundi (reviewed here) but then it is the raw energy that I want from these fiery fearless boys and Schmidt-Gaden achieves a most subtle balance. This is connosieur choral finesse that is without a doubt among the best in the world.
This recording is available for purchase exclusively from Tlzer Knabenchor at:
Konzert GmbH
Kaminskistrae 13
83671 Benediktbeurern
Tel : 08857 / 9061
Fax: 08857 / 1470
or via email: Toelzerknabenchor@t-online.de)
T h e B a c h M o t e t s  Inktroduction & Review Index
NG YEUK FAN welcomes any recordings of treble choirs and soloists.