Memories of Beethoven:
From the House of the Black Spaniards
AUS DEM SCHWARZSPANIERHAUS by
Gerhard von Breuning
Edited by Maynard Solomon
Translated from the original German by him and Henry Mins.

THE YOUTH WHO KNEW BEETHOVEN.

By its nature, what’s most obvious can easily escape our attention, so it may be worth noting that Beethoven‘s era is beyond the recall of any living person. Theoretically, there might now be some living centenarian whose grandfather could have known him, or at least been in his presence and spoken with him – but this is conceptual, and though conjecture is fruitless it’s still fascinating. We can’t talk with Beethoven or his intimates, none of whom lived into the 20th century – but here one of them operatively speaks to us, if not literally then surely effectively.

Edited by Beethoven scholar Maynard Solomon and translated for the first time from the original German by him and Henry Mins, the book From the House of the Black Spaniards – Remembrances of Beethoven from My Youth was authored by Dr. Gerhard von Breuning and first published in Vienna in 1874.

The title is fitting. As a 12-year-old, the author (whose father was a close friend of the composer) was privy to Beethoven’s inner circle and played a small but important role in the composer’s daily existence during the last year and a half of his life. He helped him in various ways by assisting with his correspondence, running special errands, helping him keep order in his dwelling, and doing what he could during Beethoven’s last illness. The boy eventually developed for the composer a feeling approaching worship. Beethoven reciprocated this devotion by guiding some of the boy’s musical education. When the young Gerhard eventually asked the older man’s permission to address him with the familiar Du (rather than the formal Sie), the boy was overjoyed when Beethoven consented.

Dr. Solomon says in the book’s introduction, “Like many children, Gerhard was a keen observer of small details” This boy, who became a respected Viennese physician, evidently was the early 19th-century counterpart of today’s “kid who doesn’t miss a thing” (even pinpointing in his book such details as the exact location and number of windows of Beethoven’s street-facing top floor apartment). His precision was fortunate and significant for posterity: it extended even to the minutest specifics about Beethoven’s dwelling, personality and character, mood swings, daily conversations about his circumstances, personal preferences and other matters now irretrievably beyond our reach and forever lost. Often even the smallest details, about any subject, can be keys to opening large doors behind which are answers to some important questions. Beethoven’s life was dramatic enough without the need for embellishment a-la-Hollywood, and von Breuning illuminates his subject from the real-world viewpoint. 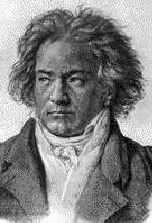 His book takes its name from the building, the Schwarzspanierhaus (House of the Black Spaniards) – Beethoven’s last residence, and where he died on Monday, March 26, 1827. In Vienna today, the site of the house (demolished ca.1904) is Schwarzspanierstrasse 15, marked with a memorial plaque and the characteristic red and white Austrian banner. In his day the address was 200 Alsergrund am Glacis. Perhaps because of its Beethoven connection the street was later renamed Schwarzspanierstrasse: the composer’s swarthy complexion in his youth prompted some to call him “The Black Spaniard” – which in turn might have been what induced a few revisionist claims in our day that the composer was African.

When Gerhard von Breuning died in 1892 he was the last survivor of those who had personally known Beethoven. Though his accounts were written late in life, he was there to witness the events of the composer’s last years. This gives us not only a more immediate picture, but perhaps more importantly, bottom-line details which shed a bright light on what transpired more than a century and a half ago. This proximity gives special value to accounts like these.

Among the book’s photographs are Beethoven’s desk, the entrance hall and main door to the very apartment he occupied in the Schwarzspanierhaus, the building’s exterior, an intriguiging floor plan of the actual dwelling, and Gerhard von Breuning himself in old age.

Perhaps the most compelling illustration is a superb photograph of Beethoven’s life-mask, made by Franz Klein in 1812. It’s compelling because it offers a literal glimpse into the past: Beethoven lived before the advent of photography, but this life mask represents him effectively as he looked at 42 and gives us the most accurate rendering we have of his physical features. Artists might disagree – but this illustration, by its very immediacy, seems to enlarge and strengthen the links in the chain that binds us to our own musical history. 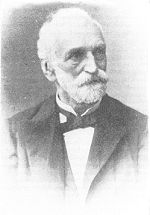 Von Breuning’s reports range from the humorous and fascinating – about Beethoven’s fondness for puns and sarcasm – to the exasperating and even heartbreaking: Gerhard (left) was devastated when as a young adult the numerous handwritten notes he had received from Beethoven were inadvertently discarded by a servant who thought they were trash.

This book is for those who want to know about Beethoven from someone who truly knew him. Historians compile and present an amalgam of data; author von Breuning via editor Solomon takes us into a courtroom and displays primary evidence unsullied by the traditional legendary gloss, the ghosts of myth, and the passage of decades. Though no-one’s memory is infallible, he still places before us, devoid of cosmetic veneer, the raw material from which we can experience our own reactions, form our own opinions, and draw our own conclusions.

The editor of this work has prepared a book that can be read and enjoyed by both reader and scholar. Its content is authentic, not synthetic – a treasury of material taken from a primary source: someone who literally knew Beethoven and who reports from this distinctive perspective. There are few if any substitutes for accounts like these, and a more superlative book of this type would be hard to imagine.

There’s no other book quite like it so its singularity makes it quite special. About Beethoven there are countless tomes, perhaps more than about any other composer, but this book provides something rather unique, which adds to its value: a compendium of fascinating details that would be difficult, if not altogether impossible, to find in any other single volume. The book is, in a word, superb and for both the reader and researcher can be enjoyable, even fascinating and, perhaps more importantly, enlightening reading.

INKPOT#8x CLASSICAL MUSIC REVIEWS: JANACEK From the House of the Dead