a survey of contemporary composers

A Polish Requiem
The Dream of Jacob 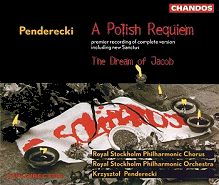 As far as requiems go, the compositional process of Penderecki’s masterpiece is perhaps a curious one: written in several stages between 1980 and 1984, its individual movements were performed on isolated occasions. The earliest were composed individually (as “stand-alones”), and were later integrated into the work: the Lacrimosa was written in 1980 for former Polish-premier Lech Waesa and his trade union Solidarno in memory of the victims who perished during the rising of the Dansk dockers; the Agnus Dei, completed in a single night in 1981, commemorates the death of the composer’s friend, the great Polish churchman Cardinal Wyszyski; the Recordare, Jesu piae which recalls Christ’s sufferings and death, was written in 1982 for the beatification of the Franciscan father Maximilian Kolbe who had volunteered in 1941 to die in Auschwitz in place of another prisoner who had a wife and children; and lastly, the Dies irae is to remind the world of the insurrection on 1 August in Warsaw against fascist Germany. 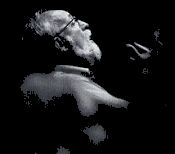 Penderecki (left) is a staunch Roman Catholic of unwavering belief and you can be sure he takes his religion and his Requiem seriously. The above references perhaps could fashion one’s perception of this work less as a mass for the dead but rather one for a nation’s sufferings. The composer has slightly altered the liturgy: he incorporates an old Polish hymn (“Swity Boe, Swity mocny”) in two movements, and omits large parts of the Offertory. As if to make up for this, he throws in a grand finale to follow the Lux aeterna and Libera me at the end of the work.

This huge opus calls for four vocal soloists, a large mixed chorus and full orchestra (with quadrupled winds and six horns). The work was premiered in its entirety on 28 September 1984 in Stuttgart under the direction of Mstislav Rostropovich, one of the composer’s most ardent champions.

The Polish Requiem clearly belongs to the composer’s “fourth phase” so to speak of his compositional style: though not to the same extent, say, with Beethoven’s, or even Stravinsky’s. Penderecki, always the “odd-man out” in Polish contemporary music, began his career as perhaps the first Polish composer to embrace the new aesthetics of Boulez, Stockhausen, Xenakis, etc. he had encountered during the newly-established Warsaw Autumn Festivals. Soon after, in the 1960s the time of the Threnody for the Victims of Hiroshima and De Natura Sonoris 1 & 2 he had broken away from the Darmstadt influence and went his own way: one which blurred the fine line between conventional concepts of music and noise.

In the 1970s, a different Penderecki arose in the retrospective ‘romanticism’ inherent in such pieces as the First Violin Concerto, the opera Paradise Lost and the Second Symphony; and the 1980s saw what would have been a total synthesis of what had gone on before, musically and conceptually. This is the period from which the Polish Requiem stems: in other words, this is

As the booklet-notes inform us,

“[Penderecki] has discovered his own musical pluralism, a predominantly polyphonic chromaticism without tonality, but with themes and motifs that make possible a contrapuntal interaction … he feels that his fascinating confrontation with late nineteenth-century music which has occupied him in recent years has considerably enriched his own compositional expressiveness. This is confirmed by the music of the Requiem Polskie, in which finally everything comes together that moved Penderecki, the man and artist, the patriot and Catholic, in such a difficult period for his country”.

Indeed, to the listener, this work is like a journey from beginning to end: it is a journey into the depths of a twentieth-century conscience which sees and feels its surrounding turmoil, and hatred, and inhumanity; a lone voice which though does not demand to be heard succeeds to be one of the most important representative of its nature.

The composer is equally at home in the craft of conducting: he has retained a post as Principal Guest Conductor of the NDR-Sinfonieorchester, Hamburg for some years now. That’s not to say he’s of immense maestro-material, la Karajan or Rattle; but he certainly possesses considerable control of the orchestra. He elicits passionate playing from the musicians in the some of the most exciting moments in the score (Dies Irae, Mors stupebit); and ensures religious sanctity to the quieter moments pianissimos are almost inaudible. My only reservation is perhaps the lack of transparency in texture a thick monotony of sound results; which pervades some of Penderecki’s compositions I’ve heard him conduct. The chorus is well-prepared to the virtuosic demands of the score, and the four vocal soloists are more than capable. The recording quality is without fault Chandos’ engineers certainly know their task; and the booklet-notes are amply annotated by the composer’s biographer and close friend, Wolfram Schwinger.

Introitus: A solemn, haunting dirge in the lower-strings opens the introduction. The chorus enters quietly with a recurrent falling semitone-motif; first in multilayered polyphonic strands, climbing in strength to a full-bodied unison to the closing words: ” Hear my prayer, unto Thee all flesh shall come. Eternal Rest.” The seamless “melody” sung by the chorus is actually a motivic mainstay throughout the entire work, and its presence is always readily detected.

Kyrie: The melodic material from the Introitus is continually in use here, and further expanded; as the chorus is joined by the vocal soloists. Dies Irae: Rapid, descending figures in the woodwinds and strings characterise this “Day of Wrath” movement, almost suggesting balls of flame descending upon the earth. Here is a glimpse of the avant-gardist Penderecki: with his once customary noise-like clusters and glissandi. The music is lent a sinister quality throughout; so apt in expressing the doom-laden ambience of the text. Tuba Mirum: Continued uninterrupted from the preceding movement, the melodic “leitmotif” that has been present ever since the Introitus is taken up this time by the bass-soloist, accompanied by a sinister array of orchestral sounds.

The Dream of Jacob, in one movement and lasting almost nine minutes, was written in 1974. Penderecki found as his source of inspiration a quote from Genesis 28:16, “And Jacob awaked out of his sleep, and he said, Surely the Lord is in this place; and I knew it not.”Although it is relatively tonal, it closely resembles Ligeti’s experiments into the field of sonority where tonality (or the absence of it) is largely secondary to the sonic capabilities of the ensemble. Penderecki the experimentalist is very much alive in this work the customary string-glissandi are all the rage here. Twelve ocarinas even lend a buzzing cascade of sound in accompaniment to the opening’s delicately shaded colours. From this mysterious stillness evolves a gnawing restlessness (effected by glissandi), which allows the music to finally erupt in a fury of turbulent sound (marked furioso and fortissimo in the score); characterising Jacob’s awakening.

After a quasi-chorale section the music dies slowly away and descends like the beginning with Jacob into sleep. The ensemble-playing here is strangely not as taut as Penderecki’s earlier recording in the 1970s with the Polish Radio Orchestra; which I personally feel is superior to the present one under review. There, unlike here, textures were more transparent thus allowing one to follow the myriad of instrumental voices in the composer’s grandiose conception within strict, chamber-like limits.

Mors stupebit: The music gets increasingly menacing. A recurrent effect is a sharp, chopped, “executioner’s-axe” figure first introduced by the violins which punctuate throughout the movement. The fleeting Dies Irae figures make a reappearance, followed by a large battery of percussion; as they accompany the chorus in invoking “Death”, who shall judge the world and let no wrong go unpunished.

Quid sum miser: The chorus chants a haunting cry for mercy that slowly builds in intensity, and is finally shattered by the crash of a gong. A pause and the soft intoning returns.

Rex tremendae: A brief, recitative-like section for the bass-soloist joined shortly by the chorus builds the momentum which is all too suddenly lost in the prayerful Recordare, where the musical and conceptual relevance of the Requiem’s Polish idiom is most obvious. The melodic cell is derived from an old Polish hymn “Swity Boe, Swity mocny” which was first employed by Penderecki in his St. Luke Passion. The mood here relaxes considerably from its precedents almost one of tranquility, save for a slightly agitated middle section; in which the text reflects on the suffering Jesus Christ.

Ingemisco, tanquam reus: Rapid, scurrying figures in the strings set the scene for the chorus’ this movement’s main protaganist silent stutters, moans and groans; and a host of other effects such as tremolando and glissando. A nervous tension pervades, as the text concentrates on supplication.

Lacrimosa: The agitation gives way to an almost subdued melancholy in a soft lament in the lower strings. The soprano-solo enters gently and succeeds in expressing the inherent sorrow in the text; as does the chorus which closes the movement in an aptly resolute major chord to the words, ” grant him eternal rest.”

Sanctus: In three distinct parts, the main motif is murmured in the low strings amidst a backdrop of hushed, sustained violins. This gives way to a passage on solo clarinet, before the mezzo-soprano expands the motivic material into the opening words. The chorus and orchestra then bring the first section to a beautiful climax. The central section, Benedictus is first taken up by the solo tenor before the combined forces sing both melodic threads contrapuntally. A three-note motif from the preceding Lacrimosa makes an appearance, before the music dies gently away.

Agnus Dei: Like the Lacrimosa before, tonality makes a strong welcome return in this movement for a capella chorus. The polyphonic writing is genuinely skilful; it being pure joy just allowing one’s ears to follow any one vocal thread. Some portamenti is combined with the generally conventional choral texture.

Lux aeterna: Familiar motifs from the opening movement returns, first in the whispering chorus; before murmuring basses once again hum the Introit‘s beginning.

Libera me, Domine: More recurring motifs (from the Dies Irae, among others) here rapid, descending figures; stuttering strings; “whirlwind”-effects; lots of percussion all working together to rouse the atmosphere to fever-pitch to the words, ” I am in fear and trembling / till the sifting be upon us, and the wrath to come.”

Below: Auschwitz I. One of many warning posts found alongside the barbed wire fencing. From The Auschwitz and Birkenau Homesite. Jrgen Lindberg, used by permission. 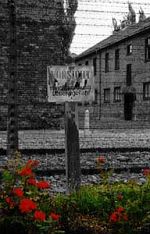 Offertorium: Lamenting violins gently nudge the soloists in their quiet lament as the hymn “Swity Boe, Swity mocny” returns. The solemnity in this movement serves as the start of a grand crescendo; which carries on into the closing Finale: Libera animas in which all the musical themes recur in grand orchestral, choral and solo, tutti. A finality ensues in the cymbal-crash and timpani-roll in the last measure.

Penderecki has intended his Requiem to contain glimpses of hope to all those who seek hope: hope for God’s help and hope of a new life. After the first performance in 1984 in Stuttgart, the composer said:

“It is impossible to live without hope. I believe that one day a new life will also dawn for Poland”.

That time, as we all know, has now come.

Return to the Requiem Cycle Index… or read other reviews from archives of the Inkvault.