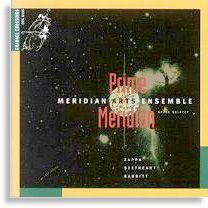 America in the 1960s and 1970s was a boiling pot of creativity. As Lenny noted in the introduction to “The Infinite Variety of Music”, the classical music world was not producing much of interest with all the Cagian experimentation. Jazz was slowing down after the great post-war era. The most lively and exciting music genre was that of ‘pop’ music with it’s daring innovations and fresh eclectic approach towards drawing the best from all genres and cultures. 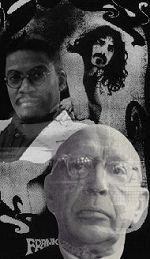 This album is aptly named Prime Meridian, “a line which does not itself belong to east or west, but which carries in itself the possibility of all directions. Endless capacity for expansion in any direction. Limitless possibilities for exploration” – it explores the music of this generation of musicians whose output receives far too little attention.

Amongst contributors to this anthology is Igor Stravinsky, by then having entered this late phase of atonalism. He is represented by his serial Fanfare for a New Theatre, a tribute to the man who kept tonalism fresh with his own brilliant compositions for three quarters of a lifetime. Here, he exudes his own mastery and style with the polyrhythmic figures within the constraints of the tone row.

Leading on, music by the late Frank Zappa (1940-1993), one of the most prolific artists of our time, whose work in film, music and theatre simply refuses to be catergorised. If anything, Zappa represented the “free” artist that has liberated himself from all rules and styles, speaking out against censorship of music, art and the printed word. His music has been performed by well-known orchestras like the LSO and the LAPO, and by Pierre Boulez, a sure-sign that this music’s significance in the 20th century repertory.

Other composers include jazz great Herbie Hancock to Pulitzer-cited Princeton Math Proffessor Milton Babbitt. Amongst these, I also found most interesting works by composers I’ve never heard of like Don Van Vliet (aka Captain Beefheart) and Frank London. Jon Nelson, the lead trumpet of the Meridian Arts Ensemble contributes two original works, of which Song for a Dead King I found rather fun. Similar in inspiration to Michael Daugherty’s Elvis Everywhere for the Kronos Quartet. Nelson’s arrangements of Zappa’s music for brass quintet is extremely creative, not only showing off the best of brass playing but creating special sonorities with percussion and vocal additions. The sounds on this disc are quite unique, like a crossover of classical, jazz, rock, metal, alternative, new age … indeed an amalgamation of genres and colours that is quite unpredictable.

My first impression upon listening to these pieces was gained from the relentless energy and anxiety the music eminates, surely a reflection of the era that was marked by such events as the Vietnam War and the Civil Rights Movement in America. An era of the breaking down of all world values and the identity formation of a new nation. The kind of harmonies, rhythms, performance techniques and arrangments heard on this CD that is easily associated with ‘grunge’, ‘alternative’, ‘funk’, ‘metal’ and what have you in our mainstream popular music culture today. Except in those days, these innocative sounds were reactionary and rebellious, artistically and culturo-politically speaking. Today, with only the exception of a few, most follow blindly a trend steeped in commercialism and mass appeal. 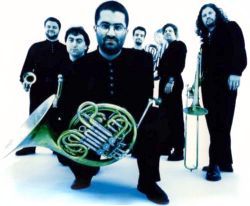 My first encounter with the Meridian Arts Ensemble (right) was with a similar anthology of music by Zappa, Jimi Hendrix et al, entitled Smart Went Crazy (also on Channel Crossings). What characterises their playing is the immaculate ensemble, seldom allowing soloistic playing by any member, which often mars the performance of other less-capable brass quintets (which typically lean heavily on their lead trumpet).

The rhythmic complexity of this music makes the ensemble’s precision even more admirable. The addition of drums expand the possibilities of the sound palette considerably. What I found rather missing was the sense of fun that they must have had making this recording; the image projected of this music is that of intellectual sophistication and satirical bite. Surely, there must be more humour and zest found in pieces with titles like “A Carrot is as close to a diamond as a Rabbit gets to a diamond” and “When I see Mommy, I feel like a Mummy”.

Nonetheless, the Meridian Arts Ensemble is dead serious about expanding the possibilities of the brass quintet, and their respect for this music is much deserved. Irreverent as they are to what exists in the industry in those days, they broke the ground for new music. Meridian may well be one of the only groups that have it on the agenda to champion the music of this period. This is an effort that deserves to be heard.

Back to the Classical Index!… or read more reviews from the Inkvault Archives!