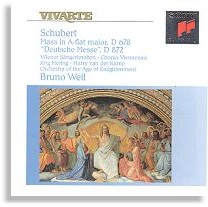 The Mass in A flat was composed over a period of three years, a long time for Schubert, who apparently laboured over it more than he did over any other single work, and this at a time when he was straining every compositional sinew in his ultimately futile efforts to establish himself as a major operatic composer; he even considered it good enough to revise and submit in application for a job at court in 1826, more than three years after its completion.

Of a length similar to that of Haydn’s later masses, yet in terms of scale and ambition more on the lines of Beethoven’s Missa Solemnis, it is the most original and Schubertian of the composer’s liturgical works, so original in fact that the application was rejected on the grounds that the work was not to the Emperor’s taste.

The scoring is for a large orchestra with trumpets, drums and trombones, so whether or not the use of boys’ voices in this recording is authentic or necessary is less important than whether they can deliver against such a backdrop. The choir can and do, probably with a bit of help from the engineers, but no matter, as their contribution sounds natural and unforced; the solo boys are taken from within their ranks, so they have no problem blending with their colleagues.

The atmosphere is more intimate and devotional than in a traditional reading, and not just because of the use of boys’ voices – try the “gratias agimus tibi” section of the Gloria, where Antony Pay’s clarinet complements the vocal quartet with a tender obligato beautifully in keeping with the soft textures of the accompanying strings, the tenor and bass singing here with great sensitivity in tricky but undemonstrative roles.

The period strings are light, agile and well articulated, while the brass have a burnished quality which at the start of the Credo is suitably suggestive of light emerging from darkness, the trombones blazing through the texture in the closing bars of the movement. But to dwell on details makes it sound as though this performance is merely trying to make points: it does, and very eloquently, but where it really scores is in giving us a sensitive and finely paced account of one of the most lyrical and under-performed of great liturgical works.

Unlike the A-flat major Mass, the eight hymns that comprise the Deutsche Messe, as the excellent sleeve note tells us, were intended for performance not as a single work but at the relevant points in the mass. It is a very simple and beautiful sequence, which in its natural tunefulness shows once again the versatility and unpretentiousness of Schubert’s genius.

The settings are sung with great feeling for context and style, yet are in no way arch or deliberate; pacing is natural and the discreet orchestral accompaniment is beautifully executed, as you would expect from this ensemble. Required listening for all lovers of this composer – if you don’t regard Schubert as one of the greats of large-scale choral music, this is one disc that may change your mind..