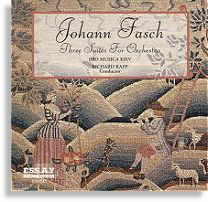 When I first heard this disc, my insides screamed out: “Eee-yerh! Modern orchestra playing Baroque music! The strings are thicker than a Mars bar!” But, after listening to this disc on and off for several months, the enthusiasm of the performance and the variety of Fasch’s writing won me over. Let’s see what’s so interesting:

Johann Friedrich Fasch is one of the most important and famous contemporaries of Johann Sebastian Bach.Telemann and Vivaldi are counted among his influences, but certainly Fasch’s own originality and resources as a composer are significant. Unfortunately, none of his compositions were published during his lifetime, and any surviving manuscripts are widely distributed and difficult to trace. Even worse, most of his vocal works – including 12 complete cantata cycles, at least 16 masses and all four operas – are lost.

His orchestral works are the chief survivors of his vast output. It is through these that Fasch’s role in the transition between the late Baroque, exemplified by Bach, and the Neo-Classicism of Haydn and Mozart has been recognised. Fasch was known for stripping away repeated (in a sense superfluous) notes in double string parts – a condensation principle which harkens towards the one of the most important concepts behind Classicism.

His 68 concertos, for example, show a composer capable of bold experiments in interrupting the ritornello with contrasting ideas for woodwind. Fasch’s thematic treatment also anticipates the principle of the Classical sonata.

The overture of the First Suite begins Baroquely enough, in moderate dance fashion. As the music picks up pace, there is a quaint horn interlude as the orchestra stops to display a horn-to-horn dialogue. Even more remarkably, this is joined by the string orchestra in marching staccato trills – quite a delightful touch and enjoyably delivered by the Pro Musica Kiev.

Although one does not expect the more rugged and pointed (sometimes too much) playing of a period instruments orchestra, this rendition by the Kiev performers is just right for the ear tired of hearing the former. To a period instruments fan like myself, my initial distaste turned into admiration for the simple, domestic and almost village-atmosphere style of the playing here. I still wish though, that the recording would be more articulate, instead of meshing up all the strings in one gushy blob. The winds, otherwise, are given good definition in this album; but the strings playing tutti sound as one instrument (a vertical block), rather than an ornate architecture of many individual violins, celli, etc (horizontal streams). In addition, some of the fast dances definitely could be played more pointedly – say, the Gavotte of the Suite in Bb. The two Gavottes of Suite No.2 however, supplemented brightly with trumpets, are just right. The second gavotte, in particular, dominated by oboes and trumpets above a bubbly bassoon continuo, is a musical gem indeed.

As Baroque suites go, these are collections of dances. Fasch’s style appears to be a mixture of Germanic/peasant-dance type with French lightness (not too light) and the not infrequent touches of Vivaldian energy and surprising creativity. If he reminds me of one composer, it is probably Telemann, rather than the sophisticated Bach. There is, for example, a playful Harlequinade in the Suite in Bb. But a quick look at Fasch’s dates will show that he was contemporary with all the High Baroque masters.

That creativity – say in the Pastorale of the Pastorale-Andante of the First Suite, appears in a moment of sunshine for a solo violin, cheery yet philosophical, musing above a hushed string pedal quite remarkably – hints of The Four Seasons!

The transition from the slow opening into the Allegro proper of the Overture of the Suite in Bb major has strong hints of Bach. The stringwork, including the lightweight initial fugue, is delightfully carved out by the Pro Musica Kiev. Their dialogue is ably supported by the busy fingerwork of the oboes and bassoon, though I find the winds are acoustically placed a bit too distant. A small pity, as Fasch’s writing for woodwind is a highlight in his music. Solos often pop out appropriately in spots to give contrast to the tutti passages.

Right: Detail from an anonymous painting, first half of 18th century.

The brass are given their space too – witness the lively overture of Suite No.2, with its rushing figures decorated by brilliant trumpets. (Actually, I generally don’t like to hear the mellow modern trumpet in Baroque music – happily, it isn’t too sweet and creamy here).

Sustained song melodies is no problem to Fasch. (In fact, this man apparently composed 96 suites!). The Suite in Bb and Suite No.2 sport two airs/arias each. I am particularly taken by the demure dance of the Aria-Andante of the former, with its swaying rhythm. The ceremonial Air in Suite No.2 sports some really delectable trumpet-duet writing, contrasting with changes of key as well as some dialogue with solo violin. It was this kind of unusual combination which attracted the attention and admiration of Fasch’s contemporaries. The clean articulation and musical passagework of the Kiev trumpeteers deserve high praise, delivering as they do, the joyous leading melodies of the Boure. I am almost perversely thrilled to hear the Pro Musica Kiev using the Baroque trill, rather than the modern (Classical) trill.

I guess when I first heard the thick modern string sound of this 1994 recording, I was put off because I had pre-conceived notions of how Baroque music should be played (especially if I had a choice of which CD to buy). But, perhaps due to the shamefully inadequate performances of Baroque music in Singapore (recently alleviated, yet not entirely so – see here), I forgot basic courtesy towards a modern orchestra playing Baroque music.

Well, I generally still prefer the sound and style of a period instrument group (even more scarce in Singapore) – but the Pro Musica Kiev (Russians at that!) reminded me that you can play Baroque music on modern instruments properly – if you be smart about it and don’t just follow notes blindly. As I write this, I am listening to the last track – I hear the knowing quick rush of notes in the violins’ staccato runs, and a smile as they slowly fall off at 1’45” into the final passages. 🙂