contemporary composers
John RUTTER (b.1945)Te Deum and other church music
Te Deum; Be thou my vision; I believe in springtime; Lord, make me an instrument of thy peace; O be joyful in the Lord; All creatures of our God and King; A choral fanfare; As the bridgegroom to his chosen; Christ the Lord is risen again; Thy perfect love; The Lord is my light and my salvation; Go forth into the world in peace; Now thank we all our God. 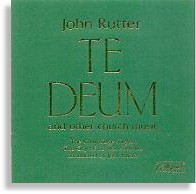 The Cambridge Singers City of London Sinfonia
with John Scott organ conducted by John Rutter
Libretto in English only.

“There is a divinity that shapes our ends.”

There in seven words you have the raison d’tre of John Rutter’s Te Deum and other church music. This album – notwithstanding the title – is an anthology of devotional carols and hymns in English, composed and conducted by Rutter from commissions and requests, and a splendid collection it is, too, with some magnificent musical settings of both historical and contemporary ecclesiastical texts.

John Rutter first came to my notice back in 1991 in The Handel Collection (American Gramaphone[sic] AGCD590), a lissom collection of selections from aforesaid composer’s music; also, one of his earliest recordings with the City of London Sinfonia. The ensemble was only formed in 1971 by wunderkind Richard Hickox, with its members selected from the most outstanding of the younger generation of musicians, some of whom were already noteworthy soloists or chamber players. Together, Rutter and the Sinfonia they have consolidated their reputation as one of London’s finest chamber orchestras (including, among other accolades, a coveted Gramophone award for a Faur Requiem).

The Cambridge Singers, who contribute the vocals on this album, are no less accomplished for their part (themselves being co-winners on the Faur Requiem); this sparkling choir was founded by Rutter in 1981, whose repertoire prominently features, to quote Rutter himself, “sacred music”. This is not a weighty choir of Handelian proportions, nor one with what we might describe as “star quality”; rather, these choristers are a smallish troupe, evoking a very intimate, homogeneous, clean body of tone, with a distinct sense of accomplishment.

The immediate sound, so characteristic of Collegium discs, is captured very amply, the recording being made in the atmospheric Henry Wood Hall in London. Curiously, the playback volume has been set lower than usual, which means that one has to push the volume up slightly to achieve a comfortable level of audibility without straining the ear. The orchestra has been balanced relatively close to the choir, but the instrumental accompaniment is never too obtrusive or distracting on the singing.

It is worth mentioning here, in view of this, that all of the works on this album were originally intended for performance in the context of a church service or festival, excepting two hymn arrangements with brass fanfares, to be accompanied by just organ or piano. Rutter (left) has, on this recording, rescored the music for small orchestra, imparting a more vivid colouration to the music which only a full instrumental palette brings.

John Rutter’s music comes, as the review’s opening Shakespearean line states, from a background deeply steeped in religion. He was a boy soprano in the school chapel choir, an organist in teenagehood, and later director of the choir at Clare College, Cambridge, before forming and conducting the Cambridge Singers. This album therefore serves as a musical testimonial to his religious roots as much as his talent for lyrical melody.

The music is never difficult nor complex; rather, his invention of melody and harmony is singular – simple, childlike themes with an occasional twist of time signature or syncopation to keep things interesting – and carries an elegantly spiritual gravitas, much in accord with Rutter’s special interest in making his music accessible to amateur performers as well as young people.

The opening track, the eponymous Te Deum, is Rutter’s choral rendition of a 5th century ecclesiastical thanksgiving canticle originally in vulgate Latin (whose opening exhortation “Te Deum laudamus” translates to “We praise thee, O God”). He includes the text of the Te Deum in its entirety, albeit in English, lasting an economical (as classical Te Deums go) seven minutes and a quarter, replete with clashes of cymbals, rolling of timpani and blasts of brassy chords to accentuate the joyfulness of worship.

By no means are sacred historic texts the material from which Rutter draws for his carols. He also musicalizes a doxology, “Go forth into the world in peace”, from the 1928 Book of Common Prayer, and no less than three carols come from the Biblical Psalms, O be joyful in the Lord from Psalm 100; A choral fanfare from Psalm 81, iii, iv; and The Lord is my light and salvation excerpted from Psalm 27.

In addition, Rutter’s musical offering also includes new melodies for classic hymns, Be thou my vision and Christ the Lord is risen again. On As the bridegroom to his chosen, he goes one step further and adds not just the music, but an additional two lines per stanza to augment a 13th century text. Rutter himself also contributes an original number, I believe in springtime, in which his abilities as a lyricist and composer are simultaneously and abundantly demonstrated.

There is – almost to be expected – one a capella work on this album, A choral fanfare, set on the third and fourth verses of Psalm 81. Rutter here employs the voice (or, to put it more poetically, the larynx) as a mimic of trumpet and horn, with sustained high-notes in multi-part harmony and ornaments thrown in for good measure. The result, performed with much panache and brio by the Singers, is something on which choral reputations are built.

As the bridegroom to his chosen and I believe in springtime spotlights Rutter’s special talent for melody and lyrics. The musical line is ravishingly beautiful, the lyrics are deeply spiritual and profound; perhaps it might be the sectarian content of the music that prevents these objets d’art from reaching a wider audience, nor would the overtly devotional nature of the songs appeal to certain tastes, but ars qua ars, these two numbers surely contain the full measure of Rutter as the psalmist of our times.

Rutter, it must be said, writes with a sure, distinctive style that cannot but fail to please. In addition to the Te Deum (and accoutrements), he has also written settings of the Requiem (Collegium COLCD 103), Gloria (COLCD 100), Magnificat (COLCD 114), as well as cantatas, anthems and carols, a veritable trove of delights for those who have been won over to the consummate musical qualities of this composer-conductor. Te Deum and other church music is but one of the many jewels in this plentiful bower.

A final word, then. In this aggressively material day and age, it is perhaps increasingly rare to find musicians who present, in their commercial output, so strong an advocacy of personal religious beliefs. Rutter is, in this respect, an admirable exception to the rule, but this is not surprising, perhaps, in view of his inspiration which, after all, one might describe as nothing less than divine.

Benjamin Chee was also formerly a boy chorister and sometime organist. His Muse of fire, however, didn’t quite ascend the highest heavens of invention, so he turned to the next best thing (i.e. criticism) instead.