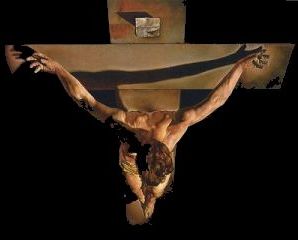 Above: Detail from "Christ of St. John of the Cross (1951) by Salvador Dali (Glasgow Art Gallery and Museum).

Bach‘s St Matthew Passion stands at the pinnacle of sacred works, having withstood the ravages of time, style and fashion.I believe I must have lost my mind after I held this set in my hands and decided that I would like to pen my impressions of it, of this magnificent work.

I have heard plenty of remarks regarding the monumentality of this work. No less, I was presented a set, earmarked as a definitive recording, of the St Matthew Passion by a close friend of mine for my birthday a couple of years ago. Indeed it is difficult not to be overwhelmed by the authoritative reading that Klemperer imbued this work with, supported by the formidable forces of the Philharmonia Orchestra and Chorus at the height of their powers.

Klemperer, or more rightly the super-producer Walter Legge, managed to assemble a stellar group of top-notch singers, all legendary in their own rights. Peter Pears sang the role of Evangelist, opposite Dietrich Fisher-Dieskau’s Jesus Christ, and Elisabeth Schwarzkopf, Christa Ludwig, Nicolai Gedda and Walter Berry singing their respective voice-type arias. Individually, this group of vocalists was famous for being stylistically accurate in their interpretation and nuance-filled singing.

By sweeping comparison, Klemperer’s reading of this work can be captured in a few words: somber and authoritative with plenty of grandeur and conviction. Having said this, van Veldhoven on Channel Classics puts forth a performance that has changed my opinion of the necessity and validity of authentic instruments/period versions of this work, much as I dislike compartmentalising performances as such.

The St Matthew Passion was written to celebrate Good Friday, as the story being told in this work only leads up to the crucifixion of Jesus Christ. The story-teller here is the Evangelist, Saint Matthew, watching scenes from Jesus’ life unfold before his eyes like an invisible person, privy to conversations with other biblical/historical characters. The development of particular scenes is rendered by solo arias and strengthened by the chorus, which is also used plentifully to represent the masses/people folk. Bach has also made a clever variation in the use of the chorus: in representing the ordinary townsfolk, the choruses were written in polyphonic fugues, and to develop the story, chorales/hymns were used. 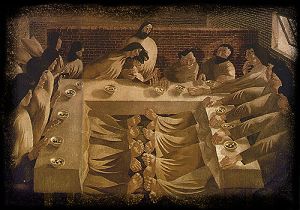 Jos van Veldhoven has a very strong group of singers, soloists and chorus, in his hands here. In my research, I have also concluded a phenomenon in the world of authentic period recordings – due to their choice of focus, many of the soloists here are very familiar with each other, having produced other recordings with other period specialists like Herreweghe, Suzuki and Koopman.

As the Evangelist, Trk possesses a mellifluous voice, easy to the ears with an equally easy high range. His recitatives are delivered with belief, matching those sung by Smits as Christ. Smits colours Christ with the gentleness of the Son of God full of warmth and sympathy, never harsh and always tender. Summarily, I dare say that the common thread of all the soloists for Channel Classics is the “lightness” of voices – lightness used here to denote the sweetness and vocal colours of the voices, rather than the ability to infuse emotions and strength.

It is a well-known fact that Bach’s use of a particular voice type adhered closely to symbolism – the soprano represented prayer, alto the Holy Spirit, tenor Christ’s love and bass the voice of the Christian faith. The unfolding of the Passion also shows that towards the end of the work, the soprano and tenor do not have any more arias, having delivered all the prayers and love earlier. More so, the arias are written for the alto and bass.

Scholl, the alto in the Channel recording, is faultless; he captures the ethereal Holy Ghost succinctly with his unearthly voice. Listen to the delicacy of his “Buss und Reu” (“Grief for sin”) and the later “Erbarme dich” (“Have mercy on me”) where his voice cries for men who do not know what they do. Johannette Zomer’s soprano is clean and weightless; indeed she floats her voice effortlessly. My only disappointment is the fact that she has a discernible vibrato, which only pops up at the end of every long-held note. However, her duet with Scholl (in the only duet in this whole work) “So ist mein Jesus nun gefangen” (“Behold, my Saviour now is taken”) is introspective and inflective, where both their voices match in their colours and depth.

Hans Jrg Mammel’s tenor is very sweet indeed – uncharacteristically nondescript but stylish nevertheless. Admittedly he does not have many such moments to shine – he certainly delivered “Ich will bei meinem Jesu wachen” (“I would beside my Lord be watching”) touchingly simple and uncluttered. Bass Peter Kooy however has a tremendous voice full of presence and authority, very malleable and flexible. If I am not mistaken, Kooy may have recorded Christ with another period conductor – and I must say that his is a voice most suited for Christ, authoritative and commanding.

Bach scored the St Matthew Passion for a double chorus with an additional boys’ choir. The thirty-odd members of the Choir of the Netherlands Bach Society rises valiantly to the challenge. As the usual practice of authentic recordings dictate, tempi are usually taken much faster. However, this particular choir is unfazed by the speeds taken by van Veldhoven – they do not stumble even in the fastest of passages, and never lose the beauty of Bach’s individual lines and phrases. All attacks are taken with the gentlest of tones, to the extent that I felt that their very weightless voices can be stretched further and higher into the upper registers.

Not to be outmatched (and out-sung), the boys’ choir of St Bavo Haarlem are nothing less than gorgeous in tones and execution. In the opening chorus, “Kommt, ihr Tchter, helft mir klagen” (“Come ye daughters, share my mourning”), the entry of the children’s voices above the double chorus sound like angels pleading “O Lamm Gottes, unschuldig” (“O Lamb of God unspotted”) – the effect is most spine-chilling and rapturous. Oh such piety and dignity in pure heavenly voices!

Right from the opening passages of the St Matthew Passion, Bach has claimed his throne as the genius that he was and the master of polyphonic music. Imagine arranging for double orchestra, throw in some other solo instruments like the lute and recorder, and then arranging a double chorus on top of that, and to top it off, put in another melody for the children’s chorus – all this done with minimal line duplication!

The Baroque Orchestra of the Netherlands Bach Society play stylishly and assuredly under the baton of van Veldhoven. I have seen and heard authentic instruments delivering effects most wonderful – at the end of the second part here, the orchestras paint a very credible earthquake and thunderstorm upon the death of Christ. Balance between the double orchestras and with the voices is kept very tightly – a harmoniously whole from first note to the last.

Where Klemperer breathed majesty into his version of this Passion, complete with drama and operatic voices, van Veldhoven infused his with quiet dignity and noble gentility. Both do nothing to invalidate the sacred message of the work – but as there are many ways to Rome, there are equally many ways to see God! Ultimately, the silver lining behind the St Matthew Passion is not about death, but the salvation of mankind and the love of God.

I feel this is one of the such a lot important info for me. And i’m happy studying your article. But want to observation on few general things, The site style is great, the articles is actually great : D. Excellent activity, cheers