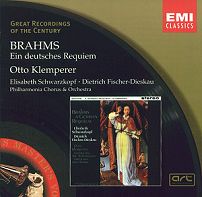 Full libretto and translations in German, English and French

Re-released recently under the Great Recordings of the Century series, Klemperer’s reading of arguably the greatest Romantic symphonic composer, Brahms’ monumental Ein deutsches Requiem is a very compelling one. Originally recorded in 1961 with the refined soprano Elisabeth Schwarzkopf and baritone Dietrich Fisher-Dieskau as soloists accompanied by Philharmonia Orchestra and Chorus, this recording captured all these musicians at the height of their powers.

Formed in the 1950s by Walter Legge and headed by maestro Herbert von Karajan, the Philharmonia Orchestra quickly established itself as a formidable force to be reckoned with. After his departure, Klemperer was appointed the “uncrowned head” and soon asserted his throne as one of the leading interpreters of Austro-German composers from Bach to Mahler.

I have sung this work before with the Singapore Symphony Chorus conducted by Lim Yau, and I have to say no one composer has managed to evoke so much emotion in a work simply in the melody, without the necessity to understand the meaning of the words behind it. However, once you add text that bears so much meaning to humanity, you have a work that is at once powerful yet delicate. In wanting to commemorate first, the passing of his mentor Robert Schumann, and later his own mother, this work clearly conjures all the inner deep sentimentality and spirituality of his losses. 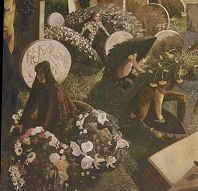 Written in seven movements, the text for Ein deutsches Requiem was drawn from various sections of the Bible – bringing the listener the messages of salvation and hope, rather than the view of fervent fear of death. The music for the opening movement, “Selig sind, die da Leid tragen” (“Blessed are they that mourn”), ebb forth from the deep depths of the orchestra, followed by the pianissimo utterances of the text, at once speaking of the solemnity of death and those who are left behind in the mortal world to mourn their loss. Brahms then allows the music to bloom, foretelling the joy and relief of those who “shall doubtless /come again with rejoicing”.

The second movement, “Denn alles Fleisch es ist wie Gras” (“For all flesh is as grass”), features its well-known slow march theme, trudging solemnly but insistently, from the heaving cries of the strings in the opening to the solemn chant of the choir above the slowly surging bass lines of timpani and lower brass. The Philharmonia Chorus rises to the challenge in the staggering fugal section at the end, steadfast in their tempi and vocal security.

The third movement introduces the baritone voice, pleading to God for direction and placing his very life in His hands. Here, Brahms introduces a father figure in the guise of the baritone – to commemorate Schumann. Like children, the chorus echoes his prayers. Dietrich Fischer-Dieskau, long known for his sensitivity to text, breathes life into every syllable; his authoritative voice leads the Chorus easily into submitting to the powers that be. The closing section of this movement features an intricate fugue that flows in line with a constant timpani roll.The Philharmonia Chorus again prove their mettle by birthing each vocal line with admirable clarity.

The soprano soloist is presented only in the fifth movement, “Ihr habt nun Traurigkeit” (“And ye now therefore have sorrow”). Surely, Brahms could not have chosen a more challenging way to introduce a soloist – not only has the singer been sitting quietly for 40 minutes, her opening line requires her to soar to a high B-flat in piano! This angelic representation – as a tribute to his own natural mother – is captured by Elisabeth Schwarzkopf in a most sensitive and graceful rendition here, sweeping effortlessly to fly above the musical staff on gossamer sounds of her voices.

For the sixth movement, the prophetic baritone voice once again leads the chorus in mocking death in the face of life everlasting. The promise of resurrection is a powerful force and is beautifully crafted in this movement, leading onto the finale. 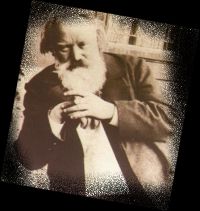 In terms of orchestration, Brahms is known to have scored for massive and dense sounds, albeit on a lesser scale compared to Wagner. In my personal experience with this work, the forte segments called for can be quite overwhelming to the chorus when you have the full orchestra playing at forte as well. But in fact, the Philharmonia Chorus does not show any signs of strain against the Orchestra, thanks to Klemperer’s sensitive adjustments of both vocal and instrumental forces to achieve the perfect balance of sounds, without adverse impact to the emotional content of the entire work. He certainly capitalises on the Chorus’ ultimate strength in tonal security, technicality and vocal colouring, infusing the subtlest of nuances in this recording. Both Orchestra and Chorus are united in responding to Klemperer’s shaping of the work, extremely pliant in their playing and lucidity.

Above/right: One of the last photographs
taken of Brahms.

At the end of this composition, Brahms had dedicated the “German Requiem” not only to Schumann and his mother, but to the whole of humanity as well. There lies only the irony that Brahms died only 17 years before World War I began.

Nevertheless, there is no need to wonder why this requiem has joined the canons of classical music history, enduring in its simple message and in its lyricism, emotion and spirituality.

Selig sind, die da Leid tragen,
denn sie sollen getrsstet werden.Blessed are they that mourn;
for they shall be comforted.