The lute, and indeed many pluck-stringed instruments such as the mandolin, harpsichord, guitar and any number of other such instruments can be said to have been accepted more as solo performance instruments rather than orchestral instruments. The reason is, partially, I think, due to the character of the sound, which is one which once produced quickly fades. This makes the presence of the “points”, or beginning of sound production, of the notes more pronounced, a feature which does not bode well for ensemble performance.

For the mandolin, things are changed somewhat in that by using tremolo, long lines can be produced. However, the frequency of each player’s tremolo is not all the same, and a slight difference in it can produce a jarring effect in ensemble performance. (Try listening to a balalaika or domra orchestra and you’ll hear this effect. I can tell you it takes some getting used to). Nowadays these instruments are used more for coloristic purposes in the orchestra (Mozart’s mandolin in the Don Giovanni Serenade, Mahler’s guitar and mandolin in the Seventh Symphony, Schnberg’s Serenade, among others come to mind).

But I digress. This disc is a “baroque lute recital”, and I must comment on it. The first two pieces, extracts from the D-minor Partita BWV 1004 and the Sonata BWV 1003 are among the most beautiful and rewarding movements of the Six. Bach himself wrote a “Lute Suite”, actually the Fifth Cello Suite, and he obviously loved writing for the harpsichord (although his favourite instrument was the clavichord), so there is a little basis behind this experiment.

It is somewhat ironical, when you think about it. On the violin, which the pieces were originally written for, it is not possible to play the chords without “spreading” or arpeggiating it, in other words, instead of

The lutenist is eminently capable of performing it the way it is written, however because the lute’s notes don’t last, none of these long notes actually have their full value. This happens in the harpsichord also, of course.

The poor lutenist thus has to perform it in the arpeggiated form, as do guitarists. And so does Satoh. He has a good technique, but even he is powerless against the quickly fading notes of the lute. What I am trying to say here is that whether you end up enjoying the performance of these two pieces on the lute, particularly the Chaconne, depends greatly on whether you can actually accept the compromises (and they are serious ones) that playing on the lute brings with it. 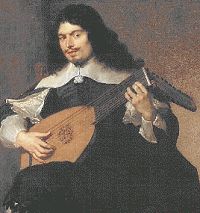 The performance itself is on the slow side (16:52) and is musical, though I feel it lacks a little verve and flexibility in tempi, which are mostly slow to moderate. Plus, of course, the fact that although the lute is capable of variations in timbre, its capability to express is inferior to the encyclopaedic capabilities of the violin. In the opening of the D major portion, for instance, one misses the soft-grained voice of the violin, and Satoh attempts to compensate by slowing this portion down, resulting in a mood which is more contemplative than passionate. The Andante is likewise taken at a rather slow tempo throughout. Here, the use of the lute is arguably more effective than on the violin (and much easier to play, I might add). Again, musical performances here.

Satoh seems to find more to say, and more character in the third piece, the Suite l’Infidele, by Silvius Leopold Weiss, almost an exact contemporary of Bach’s. (Bach 1685-1750, Weiss 1686-1750). Attractive music, and delightfully played, with the freedom in tempi that I found lacking in the Bach. Weiss was a lutenist himself, in fact the most influential in Germany, as the sleeve notes tell us. This music is very idiomatically written for the lute, and hardly any exceptions need to made for it.

The suite is written in minor, and is mostly in a rather serious, contemplative mood. As the term suggests, it includes a prelude, a courante, sarabande, menuet, muzette and paysanne. The latter two are dance forms which did not prove as long-lasting as the others in terms of appeal, though I don’t see why. The muzette is a lively duple time dance which lacks nothing in comparison to the allemande, for instance. The paysanne in this suite is likewise pleasing in its invention and creativity. All this music is very lute-friendly, as I mentioned earlier, and the quality of the music bears comparison with Bach.

Jacques Gallot, said to be born around 1600, was a great French lutenist, and we hear his Folies d’Espagne, a haunting piece written in minor, evocative of times long past. It is essentially a theme-and-variations, and again it is right at home on the lute. This is beautiful music, imaginatively performed and definitely worth more than a casual listen. In fact I think I’ll put it on again very soon. 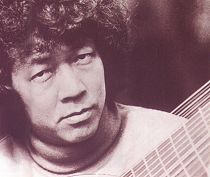 Satoh’s own Tombeau de Mr D. Phillips was written in memory of his friend, a lutenist and double-bassist, in 1982. It combines modern ideas of harmony and invention with the allemande form. After the all-Baroque program before it, it can be jarring in its difference in style. In all honesty I can’t say I find in it the invention and creativity of the pieces which preceded it.

The Baroque lute which Satoh plays on was built in 1981 by Richard Berg in Ottawa, Canada, following an original instrument built in 1596 by Hans Burkholtzer in Fssen.

The timing of the album is 54:41. Surely with the time remaining (24 minutes, no less) something more could have been recorded, for example some of the other pieces by Weiss and Gallot? But all in all, this is a rewarding lute recital and I shall return to it for the Weiss suite and Gallot’s Folies D’Espagne.

Derek Lim wonders if Baroque chicken rice sellers could have invented a chicken-feather-plucking device based on the model of the harpsichord. [I’ll have the wings in C#, thanks. – Ed.]

Back to the Classical Index!… or find more Bach reviews from the Inkvault Archives!