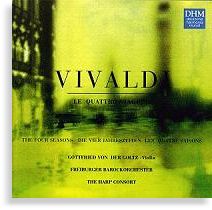 Includes the sonnets read in Italian, with English, German and French texts translations.

For this recording of The Four Seasons, the period-instrument Freiburg Baroque Orchestra is joined by the Harp Consort of well-known harpist, Andrew Lawrence-King. The Consort, contrary to what the name might suggest, contains only one harpist, Lawrence-King, who plays an Italian Baroque harp and a psaltery. He is joined by a colourful assortment of other plucked string instruments such as two citterns, an archlute, guitars, theorbo, regal and harpsichord. The potentials of such an arrangement, which Lawrence-King calls the “consort in the continuo, is that “with its wide range of dynamics and tone-colours, responds to the delicacy of the concertino or the majesty of the ripieno…” Or is it? We shall see…

In Spring I, the thick low sound of the harp consort does offset the thin, high tones of the bowed strings. In the goatherd’s siesta of Spring II, the dog is however very agitated, the violas sounding dull, metallic and very coarse (perhaps the mutt has a sore throat?) – it’s a wonder that the goatherd is still sleeping, what with such a ‘faithful’ and ‘vocal’ companion! Nevertheless, in Spring III, a layering effect achieved by orchestra is very neat and unique.

While the harpsichordist(s) is very heavy-handed and banging, soloist Gottfried von der Goltz is a fine player but not distinctive – at worst his tone is irritating – though his little ghostly slides in the first movement of Summer are worth hearing. Vivaldi’s score emphasizes the storm by having the orchestra play tutti and loud, but if he had heard this version, he might have thought otherwise and disapproved of the rather noisy arrangement.

In Summer II, the stormy sections are again marred by having too many instruments. Although much is done to create a contrast between the soft and loud sections, the noisiness of the latter backfires on the orchestra’s (and the directors’) intentions. Again, too many ingredients (and chefs) over-roast the storm in Summer III. Goltz focuses on the technical aspects of the score at the expense of the violin’s tone, which is thin. The harpsichord sounds like rusty sleighbells jangling out of harmony.

For the Autumn concerto, the bowed strings have a cutting, sometimes harsh tone. Meanwhile, von der Goltz’s running passages are not always clear, giving the impression that he is chasing after his own notes. For the sleeping drunkards of Autumn II, the Harp Consort could have taken full advantage of the score while the solo violin is quiet, but they remain inconspicuous, hiding in the background. Lastly, in “The Hunt”: well, I suppose everyone – people, foxes, dogs, etc. – are running about frantically, not because they are hunting or being hunted, but because they want to get as far away from the harpsichord as possible!

In Winter, I think the whole orchestra needs tuning, or at least much more refinement. The strings squeak! Still, for some parts of this movement, the strummed strings create a nice effect, but the whole thing is drowned by the bone-jarring harpsichord, which also affects the concerto as a whole. In the last movement, the tone of the soloist continues to improve as the Seasons draw to an end. Overall, an extremely harsh winter.

The “Winter Largo”: thankfully, my favourite movement escapes from the above treatment unscathed. Though the pizzicato on the violins is a bit too rough, the cello continuo is perfect. The tone of von der Goltz, strangely enough, mellows here – if you ask me, he should have played with this tone for the whole Seasons! It would have done wonders for this fallen recording as a whole.

The best thing to come out of CD is the recording of the sonnets, read in Italian. The unacknowledged narrator changes his tone and dynamics according to the description of the sonnets – showing great understanding of the poetry – the orchestra should have followed his example with the music.

This is a horrible and noisy arrangement – one should not be inventive for the sake of it, but bear in mind the outcome. The soloist appreciates the subtleties of the score but with few exceptions, his violin tone is edgy and thin. I wouldn’t recommend this to anyone – unless you just wanted a great recorded reading of the sonnets. Someone please (I beg you) find the harpsichordist and hack his instrument to pieces…

This disc is available at or can be ordered from Tower (Pacific Plaza & Suntec City), HMV (The Heeren), Sing Discs (Raffles City) or Borders (Wheelock Place).